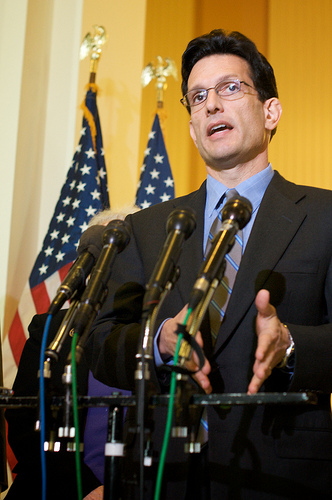 Buried in a New York Times story today on Congressional Republicans’ opposition to extending a payroll tax cut that would mostly benefit the working and middle classes is this gem of a quote from Brad Dayspring, a spokesman for House Majority Leader Eric Cantor:

“All tax relief is not created equal. If the goal is job creation, Leader Cantor has long believed that there are better ways to grow the economy and create jobs than temporary payroll tax relief.” [emphasis mine]

This is, on its face, an accurate statement. As the non-partisan Congressional Budget Office noted last year, some tax cuts boost the economy more than others—cutting the payroll tax cut for employers, for instance, provides more of an immediate jolt to the economy than cutting it for employees, as President Obama is now recommending. (Mind you, of all the policy options in Congress’ toolkit, the CBO ranked increased aid to jobless workers as the most effective. That option is nowhere on the GOP’s radar.)

Obama’s payroll tax cut extension for employees would help the economy. “The increase in take-home pay would spur additional spending by the households receiving the higher income, and that higher spending would, in turn, increase production and employment,” the CBO explained. Sure, households would save some of that money, but plenty more would be spent. Economist Mark Zandi (a former John McCain adviser) said in June that extending the payroll tax cut is a “reasonable” idea that would provide a much-needed short-term jolt to the economy. “Without that payroll tax cut this year,” Zandi went on, “I think we’d be skirting recession now because of the higher energy prices.”

Back to Cantor’s flack and the GOP’s “all tax relief is not created equal” talking point. So if payroll tax cuts for employees aren’t the answer for  tax-cut-loving Republicans, what is? Well, let’s take a look at their record and their jobs plans. Looming large, of course, are the GOP’s beloved 2001 and 2003 Bush tax cuts, which mostly benefitted the very wealthy and did little to stimulate the economy. Slashing taxes also features prominently in the jobs plans of GOP leaders such as Eric Cantor and Paul Ryan. In its analysis, the CBO ranked lowering income taxes dead last in its effectiveness.

Why, then, does the GOP support these ineffective tax relief plans? Could it be because the minority of wealthy Americans who do benefit are the same people who bankroll their campaigns?