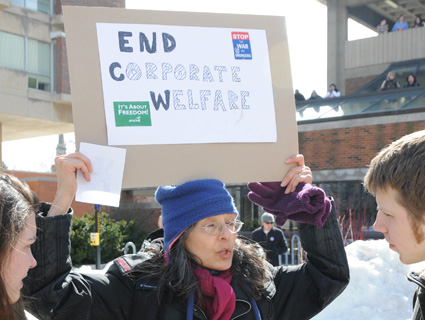 With the dust settling after the debt ceiling fight, Republicans—along with a few Democrats—are moving on to their next agenda item: blocking states from collecting millions in much-needed tax revenue from corporations.

The Business Activity Tax Simplification Act, or BATSA, passed out of the House Judiciary Committee in early July and is set to be taken up by the full House when Congress returns from its August recess. The bill, which is sponsored by Rep. Bob Goodlatte (R-Va.), would forbid state and local governments in the 44 states that collect corporate income taxes from taxing a sizable chunk of corporate profits. How sizable? The nonpartisan Congressional Budget Office, which scored a previous version of the bill in 2006, estimated that state revenue losses would explode to $3 billion annually within five years of enactment. Michael Mazerov, a senior fellow at the Center for Budget and Policy Priorities, says BATSA’s current incarnation protects an even larger portion of corporate profits than the earlier bill, so state revenue losses could be even higher than the CBO projected. And here’s the kicker: since no federal revenue is lost in the process, it’s no skin off the backs of lawmakers in Washington.

The basic theory behind BATSA is that states shouldn’t have the right to tax companies with permanent headquarters located in other states. The current bill allows for taxation of businesses that have employees within a state for more than 15 days, but that exception is actually very easy to avoid. Consider a bank with branches in multiple states that, like most major commercial banks, is an active player in the mortgage loan business. These kinds of banks often hire independent contractors to process mortgage applications. But under BATSA, a state wouldn’t be able to tax the bank for profits it reaped within its borders, because the contractors wouldn’t count as “employees.”

Congress has considered some version of BATSA every year since 2000. Each time, a coalition of groups—the National Governors Association, the Multistate Tax Commission, and a combination of state and local organizations and public employee unions—have managed to beat it back. But the tide could be turning. After the bill’s markup in July—just the second time BATSA has made it out of committee—Americans for Tax Reform, Grover Norquist’s anti-tax advocacy group, rejoiced.

Someone should tell the anti-tax activists, though, that their support for the bill could undermine corporate America’s long-term financial stability. Without BATSA, ATR argues, corporations “that receive no direct benefit from the state”—i.e., those that are based elsewhere—are forced to bear a bigger share of the tax burden. But the roads, bridges, and other elements of basic infrastructure that those tax revenues pay for help transform states into attractive places for private investment. Lower corporate tax rates, while keeping more money in shareholder pockets, also mean less money for states to spend on physical infrastructure and the manpower to maintain that infrastructure. Over the long haul, that makes states far less lucrative environments for companies to set up shop. By helping businesses shirk their tax obligations in the short term, in other words, BATSA threatens their prospects for future growth.

BATSA isn’t the only revenue-gutting bill making its way through the Congressional pipeline. House Republicans aim to bring another half dozen-or-so bills like it—collectively known as “state tax preemption” bills—that offer corporations massive carve-outs while slowly chipping away at states’ abilities to collect taxes. Most of them are vaguely worded and benefit companies with multi-state presences—in other words, very big businesses. They include the Permanent Internet Tax Freedom Act, which would prevent states and localities from taxing Internet service providers, and the Wireless Tax Fairness Act, which establishes a moratorium on any new taxes or fees on cell phone service providers.

Lars Etzkorn, the program director at the National League of Cities, which advocates for the interests of municipalities around the country, says that state tax preemption effectively neuters local governments. “You’re taking local accountability and local decision-making from where we think it belongs, and where there’s a history of good financial stewardship, and instead having people in Washington… imposing their system, their will on local governments,” Etzkorn says.

So even as businesses rail against overtaxation and crippling regulation, it turns out that they still rely on the federal government to protect them from states and municipalities. “Business people understand very well that they’re creating new loopholes” with these bills, Mazerov says. When it’s convenient, it seems, even corporate America doesn’t mind a little nannystateism.