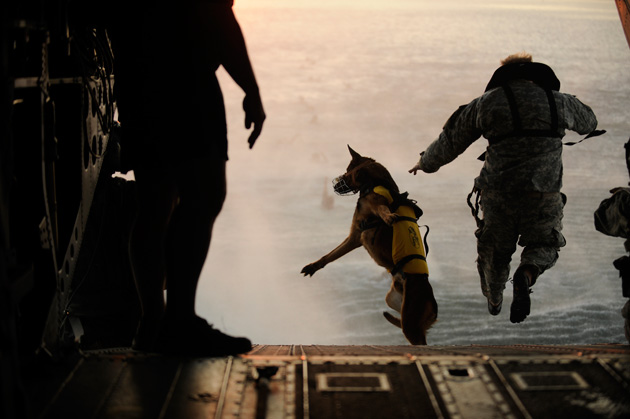 A US Army soldier and his dog jump off a helicopter ramp during water training in March 2011.Manuel J. Martinez/U.S. Air Force Handout

Editor’s note, 5/1/12: A year after the US killed Osama bin Laden, questions remain about who knew where he was hiding, who may have helped him, and precisely how he met his end. A new book by Peter Bergen, “Manhunt,” underscores conflicting details about the raid: Contrary to prior reports, everyone shot by the Navy SEALs at the compound, Bergen writes, was unarmed. He doesn’t specify who fired bullets into bin Laden. And while he reports on the SEALs’ use of night vision goggles, he makes no mention of their recording the entire raid with helmet cameras.

You don’t have to be a conspiracy theorist to be still scratching your head about the end of Osama bin Laden. Between the Obama administration and major media reports, there have been multiple divergent accounts of the Navy SEALs’ mission in Abbottabad, Pakistan, with the story seeming to be colored by politics, sensationalism, and outright fantasy. In some respects that’s unsurprising for one of the most important and highly classified military missions in modern memory‚ the outcome of which, many would argue, is all that really matters. But precisely because of its importance, it is worth considering how the tales have been told, and where history begins to bleed into mythology.

Lots of praise flowed in early August for Nicholas Schmidle’s riveting story in The New Yorker of the SEALs’ raid on bin Laden’s compound. It added many vivid details to what was publicly known about the death of America’s arch-nemesis in early May. But Schmidle’s exquisitely crafted reconstruction also contradicted previous reporting elsewhere and sparked some intriguing questions of its own.

It underscored what we still don’t really know about the operation. Schmidle’s depiction of the tense scene in the White House situation room, as President Obama and his top advisers monitored the action with the help of a military drone, included a notable refutation. The SEALs converged at the ground floor of bin Laden’s house and began to enter, Schmidle reported, but:

What happened next is not precisely clear. “I can tell you that there was a time period of almost twenty to twenty-five minutes where we really didn’t know just exactly what was going on,” [CIA chief Leon] Panetta said later, on PBS NewsHour. Until this moment, the operation had been monitored by dozens of defense, intelligence, and Administration officials watching the drone’s video feed. The SEALs were not wearing helmet cams, contrary to a widely cited report by CBS. 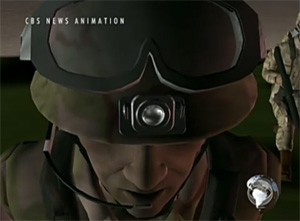 Still depicting helmet cameras worn by the SEALS from CBS News’ digital reconstruction of the raid. Screenshot: CBS NewsThe contradiction has big implications. Martin’s own story was in part a response to the famously mutating account from the Obama White House in the days following the mission. The administration had attributed its multiple revisions to “the fog of war” after backtracking from claims that bin Laden had engaged the SEALs in a firefight and used his wife as a human shield. Martin’s piece stated he was putting forth “a new picture of what really happened” in Abbottabad; he reported that “the 40 minutes it took to kill bin Laden and scoop his archives into garbage bags were all recorded by tiny helmet cameras worn by each of the 25 SEALs. Officials reviewing those videos are still reconstructing a more accurate version of what happened.”

Such footage obviously could go a long way toward a precise account. According to Schmidle’s New Yorker piece, though, it doesn’t exist.

There are other glaring discrepancies between The New Yorker and CBS reports concerning the climax of the raid. In Schmidle’s version, the encounter involved two of bin Laden’s wives, and one SEAL firing the kill shots:

The Americans hurried toward the bedroom door. The first SEAL pushed it open. Two of bin Laden’s wives had placed themselves in front of him. Amal al-Fatah, bin Laden’s fifth wife, was screaming in Arabic. She motioned as if she were going to charge; the SEAL lowered his sights and shot her once, in the calf. Fearing that one or both women were wearing suicide jackets, he stepped forward, wrapped them in a bear hug, and drove them aside…

A second SEAL stepped into the room and trained the infrared laser of his M4 on bin Laden’s chest. The Al Qaeda chief, who was wearing a tan shalwar kameez and a prayer cap on his head, froze; he was unarmed.…Nine years, seven months, and twenty days after September 11th, an American was a trigger pull from ending bin Laden’s life. The first round, a 5.56-mm. bullet, struck bin Laden in the chest. As he fell backward, the SEAL fired a second round into his head, just above his left eye.

But in Martin’s version, the encounter involved bin Laden’s “daughters” as well as one of his wives—and not one, but two SEALs firing the kill shots:

The SEALs first saw bin Laden when he came out on the third floor landing. They fired, but missed. He retreated to his bedroom, and the first SEAL through the door grabbed bin Laden’s daughters and pulled them aside.

When the second SEAL entered, bin Laden’s wife rushed forward at him—or perhaps was pushed by bin Laden. The SEAL shoved her aside and shot bin Laden in the chest. A third seal shot him in the head.

Then there is the question of how many SEALs were in on the raid: Martin reported that 25 of them stormed the compound. Schmidle reported that 23 did (along with a Pakistani American translator and a now legendary Belgian Malinois.)

What’s going on here? Martin’s piece was broadcast nearly two weeks after the raid; presumably the US government had its story straight by then. (The Guardian‘s roundup of White House revisions linked above was published on May 4.) Martin provided scant information in the piece about his sourcing. If it has turned out to contain inaccuracies, to date CBS News has given no indication.

Other news reports deepen the confusion: The consensus became that bin Laden was unarmed when the SEALs shot him, but who else was in the room?

It is also possible that Schmidle’s piece contains inaccuracies, though it is more deeply reported and goes further in describing its sources. They include Obama’s chief counterterrorism adviser John O. Brennan, deputy national security adviser Ben Rhodes, and perhaps most significantly, “a special-operations officer who is deeply familiar with the bin Laden raid.”

Still, Schmidle wasn’t able to interview any of the Navy SEALs directly involved in the mission, although his piece gave the impression he had. Instead, Schmidle told the Washington Post‘s Paul Farhi, he relied on the accounts of others who had debriefed the men. “None of them had any previous knowledge of the house’s floor plan,” Schmidle wrote conspicuously in his New Yorker piece, “and they were further jostled by the awareness that they were possibly minutes away from ending the costliest manhunt in American history; as a result, some of their recollections—on which this account is based—may be imprecise and, thus, subject to dispute.”

Other reports deepen the confusion. The consensus became that bin Laden was unarmed when the SEALs shot him, but who else was in the room? An early May broadcast from NBC News matches neither CBS nor The New Yorker on that count. “As the SEALs stormed up the stairs two young girls ran from the room,” NBC reported. “One SEAL scooped up the girls and carried them out of harm’s way. The two other SEALs rushed the bedroom door.” In this version only one of bin Laden’s wives was in the third-floor room where he was killed. Meanwhile, the Associated Press reported the prior day that one of bin Laden’s sons was also there: “The son was shot dead in that room, too.” (NBC and others reported the son was killed on the second floor.) According to the AP report, bin Laden acted aggressively when confronted: He had “appeared to be lunging for a weapon.” According to a Fox News report, bin Laden had acted “scared” and “completely confused” and in a “cowardly manner.”

Whether any footage of the raid would ever see the light of day is one matter. (There are obvious reasons why it would be kept secret.) But whether it exists at all is significant.

In a recent email exchange regarding the helmet-cam issue, Schmidle would only reply off the record to my questions about his certitude and sourcing. Last week I reached an executive at CBS News by phone; the executive was dismissive and would only speak off the record, even then providing no useful information and refusing to put me in touch with Martin or his producers.

From fraught US-Pakistan relations to conspiracy theories to partisan politics, it’s an understatement to say that there is keen interest in knowing exactly how the killing of bin Laden went down. Faulty reporting may be to blame for standing in the way. Alternatively, the mind doesn’t require much bending to imagine why military, CIA, or White House officials might have been happy at various turns to help muddle the story. A certain degree of imprecision or misdirection can serve the side of secrecy. Perhaps at a time when the White House declined, amid much clamor, to release photos of bin Laden’s corpse, it was useful to let the world know that it also had video footage of the whole operation. Perhaps at a later point it was useful to quash the idea that the US government had raw footage with which it might address questions about the circumstances and legality of bin Laden’s killing.

Whatever the case, one of two stories from major American media sources is flat-out wrong on a significant piece of information about the raid, and there is much conflicting information about other details as well. It may be that a precise account of the historic mission will elude us for a long time, just as its target so famously did.