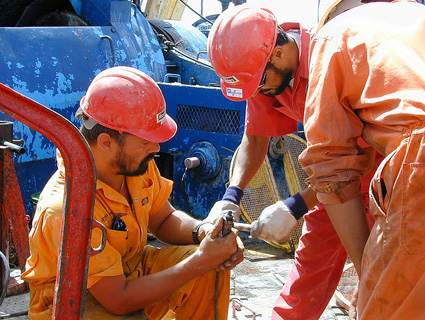 Too soon? While rebel forces have captured most of Tripoli, loyalists to Muammar Qaddafi are still holding onto outposts in the city and the dictator has not yet ceded power. (See our Libya explainer for more.) But BP and other oil companies are already gunning to get back in.

The Wall Street Journal reported Monday morning that although BP doesn’t have any firm date yet on when it will resume work on its exploration program in Libya’s Gulf of Sidra, the company is committed to returning to the country.

BP said it hasn’t yet entered into any commercial transactions with the Transitional National Council.

Because its exploration project was still in its early stages of development, the company didn’t have much infrastructure in the country when war broke out. However, a rig in the desert near Ghadames was made as “safe and secure and possible,” although this will still have to be accounted for.

Libya is home to the largest oil reserves in Africa, hence the rush to develop it. As Reuters reported Monday night, the Italian oil company Eni SpA has already sent staff into the country to evaluate the oil facilities. The Dutch company Shell, the French company SA, and Qatar’s national oil company are also eager to get in.

But BP in particular has a questionable past when it comes to Libya. Last year, amid the Gulf of Mexico oil spill disaster, the company was accused of having negotiated the release of the terrorist convicted of bombing Pan Am Flight 103 in exchange for access to Libya’s vast oil reserves. A Scottish court released Lockerbie bomber Abdelbaset al-Megrahi in August 2009 based on testimony from doctors that he was terminally ill with prostate cancer and had only three months to live. He’s still alive, and one of the doctors has since come forward to claim that the Libyan government bribed him. Four Senate Democrats asked the Foreign Relations Committee to look into it, and the committee later concluded that Megrahi’s release was unjustified. The committee report noted that both the Scottish and British governments “refused to respond to questions,” and that the committee believes the UK government played a “direct, critical role” in Megrahi’s release.”

BP and other governments apparently weren’t too worried about colluding with a despotic government to free a convicted terrorist in the interest of accessing oil reserves a few years ago. So we should probably be concerned about what they’ve got planned in Libya at a point when the situation is still so uncertain.

UPDATE: I reached out to the office of Sen. Robert Menendez (D-NJ), who has led the effort to investigate Megrahi’s release, for comment on the latest news. “With the imminent fall of the Qadaffi regime and the rise of the Transitional National Council, I hope the new government will set a course for international cooperation, and agree to extradite al-Megrahi and help the U.S. uncover the facts behind BP’s dealings with Qadaffi and its role in the Lockerbie Bomber’s release,” said Menendez.