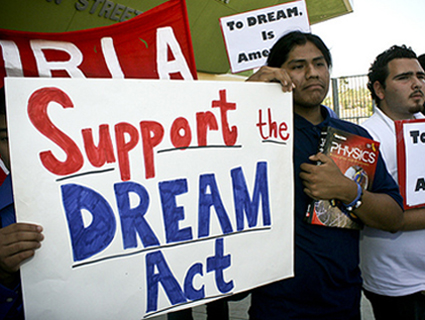 When Gov. Pat Quinn signed the Illinois Dream Act into law today, the Prairie State became the second state in a week to try to bring some financial relief to undocumented college students. Like California Assembly Bill 130, signed by Gov. Jerry Brown last Monday, the Illinois Dream Act deals with scholarship money. Under the new law, named after the all-but-dead federal DREAM Act, the state will put together a committee to establish private grants for immigrant students who attended at least three years of high school in Illinois and also received their diplomas.

At the signing, which took place at Benito Juarez High School in Chicago’s largely Latino Pilsen neighborhood, Quinn stuck to the basics of the debate, framing the bill as a question of access. “All children have the right to a first-class education,” he said. “The Illinois Dream Act creates more opportunities for the children of immigrants to achieve a fulfilling career, brighter future, and better life through higher education.”

Even Chicago Mayor Rahm Emanuel—who once called immigration “the third rail of American politics” and was considered an obstacle to immigration reform during his tenure as White House chief of staff—got behind the legislation. “Immigrants are a driving force in our city’s cultural and economic life, and opening the way for all Chicago students to earn an excellent higher education will make our city even stronger,” he said in a press release. “I am proud that families and students across Illinois will now have a better shot at the American dream—which starts with a great education.”

But for one outspoken Emanuel critic, Rep. Luis Gutierrez (D-Ill.), the December failure of the federal DREAM Act and the high number of deportations during the Obama presidency far outweigh the incremental gains of recent state-level bills and the “prosecutorial discretion” now given to Immigration and Customs Enforcement agents in certain deportation cases. Writing in the Guardian, Gutierrez set out to explain why he was arrested while protesting with other pro-immigrant activists in front of the White House last Tuesday:

…Barack Obama’s record on immigration as president does not match the rhetoric or the huge expectations he created in 2008. A million people have been deported by President Obama—approximately, 1,100 per day; most of them Latinos—far more than his predecessor George W. Bush or any American president. Without being prodded by Congress, he expanded the use of the military at the border with Mexico, mandated the use of an electronic employment eligibility system for all firms doing business with the government and, most controversially, expanded a program misnamed “Secure Communities” that enlists state and local law enforcement in federal immigration matters. Such programs erode trust between immigrants and their local police because reporting a crime or domestic abuse could lead to deportation (which has, indeed, happened). When the governors of New York, Massachusetts, and Obama’s own state of Illinois—solidly Democratic Obama territory—tried to withdraw from the program, the president told them participation by their states, counties, and cities is mandatory.

Gutierrez’s editorial hinted at Obama’s larger credibility issue with Latinos, who overwhelmingly supported him in 2008. To wit: During the president’s speech last Tuesday at the National Council of La Raza, he addressed concerns with the increased deportations, saying that he understood “the real pain and heartbreak” that they have caused. “Now I know some people want me to bypass Congress and change the laws on my own,” he said.

The crowd’s response? “Yes, you can!”