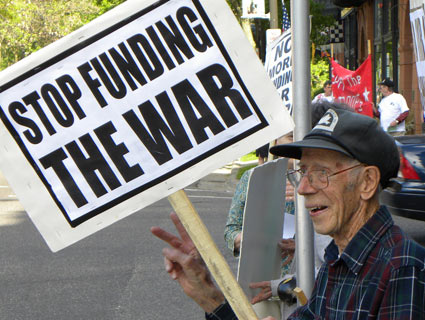 By now, it seems as if everybody and his brother has joined the debt-ceiling imbroglio in Washington, perhaps the strangest homespun drama of our time. It’s as if Washington’s leading political players, aided and abetted by the media’s love of the horserace, had eaten LSD-laced brownies, then gone on stage before an audience of millions to enact a psychotic spectacle of American decline.

And yet, among the dramatis personae we’ve been watching, there are clearly missing actors. They happen to be out of town, part of a traveling roadshow. When it comes to their production, however, there has, of late, been little publicity, few reviewers, and only the most modest media attention. Moreover, unlike the scenery-chewing divas in Washington, these actors have simply been going about their business as if nothing out of the ordinary were happening.

On July 25th, for instance, while John Boehner raced around the Capitol desperately pressing Republican House members for votes on a debt-ceiling bill that Harry Reid was calling dead-on-arrival in the Senate, America’s new ambassador to Afghanistan, Ryan Crocker, took his oath of office in distant Kabul. According to the New York Times, he then gave a short speech “warning” that “Western powers needed to ‘proceed carefully’ and emphasized that when it came to the war, there would “be no rush for the exits.”

If, in Washington, people were rushing for those exits, no chance of that in Kabul almost a decade into America’s second Afghan War. There, the air strikes, night raids, assassinations, roadside bombs, and soldier and civilian deaths, we are assured, will continue to 2014 and beyond. In a war in which every gallon of gas used by a fuel-guzzling US military costs $400 to $800 to import, time is no object and—despite the panic in Washington over debt payments—neither evidently is cost.

In Iraq, meanwhile, in year eight of America’s armed involvement, US officials are still wangling to keep significant numbers of American troops stationed there beyond an agreed end-of-2011 withdrawal date. And the State Department is preparing to hire a small army of 5,000-odd armed mercenaries (with their own mini-air force) to keep the American “mission” in that country humming along to the tune of billions of dollars.

In Libya, the American/NATO war effort, once imagined as a brief spasm of shock-‘n’-awe firepower that would oust autocrat Muammar Gaddafi in a nanosecond, is now in its fifth month with neither an end nor a serious reassessment in sight, and no mention of costs there either. In Yemen and Somalia, the drones, CIA and military, are being sent in, and special operations forces built up, while in the region a new base is being constructed and older ones expanded in the never-ending war against al-Qaeda, its affiliates, wannabes, and any other nasties around. (At the same time, the Obama administration is leaking information that the original al-Qaeda teeters at the edge of defeat, even as it intensifies the CIA’s drone war in the Pakistani tribal borderlands.) And further expansion of the war on terror—watch out, al-Qaeda in North Africa!—seems to be a given.

Meanwhile back in Washington—not, mind you, the Washington of the debt-ceiling crisis, but the war capital on the banks of the Potomac— national security spending still seems to be on an upward trajectory. At $526 billion (without the costs of the Afghan and Iraq wars added in), the 2011 Pentagon budget is, as Lawrence Korb, former assistant secretary of defense under President Ronald Reagan, has written, “in real or inflation adjusted dollars… higher than at any time since World War II, including the Korean and Vietnam Wars and the height of the Reagan buildup.” The 2012 Pentagon budget is presently slated to go even higher.

Senator John McCain recently raised the question of Pentagon spending in tight times with General Martin Dempsey, the newly nominated chairman of the Joint Chiefs of Staff. He asked about a plan proposed by President Obama to cut $400 billion in Pentagon funds over twelve years, as well as proposals kicking around Congress for cutting up to $800 billion over the same period.

General Dempsey replied, “I haven’t been asked to look at that number. But I have looked and we are looking at $400 billion. Based on the difficulty of achieving the $400 billion cut, I believe achieving $800 billion would be extraordinarily difficult and very high risk.”

In little of the reporting on this was it apparent that Obama’s $400 billion in Pentagon “cuts” are not cuts at all—not unless you consider an obese person, who continues eating at the same level but reduces his dreams of ever grander future repasts, to be on a diet. The “cuts” in the White House proposal, that is, will only be from projected future Pentagon growth rates. Nor were the “savings” of up to one trillion dollars over a decade being projected by Senator Harry Reid as part of his deficit-reduction plan cuts either, not in the usual sense anyway. They are expected savings based largely on the prospective winding down of America’s wars and, like so much funny money, could evaporate with the morning dew. (In his last minute deal with John Boehner, President Obama’s Pentagon “savings” have, in fact, been reduced to a provisional $350 billion over 10 years.)

So here’s a question at a moment when financial mania has Washington by the throat: How would you define the state of mind of our war-makers, who are carrying on as if trillion-dollar wars were an American birthright, as if the only sensible role for the United States was to eternally police the planet, and as if garrisoning US troops, corporate mercenaries, and special operations forces in scores and scores of countries was the essence of life as it should be lived on this planet?

When I was kid, I used to be fascinated by a series of ads filled with visual absurdities, in which, for instance, five-legged cows floated through clouds. Each ad’s tagline went something like: What’s wrong with this picture?

So imagine two worlds, both centered in Washington. In one, they’re heading for the exits, America’s credit rating is in danger of being downgraded, jobs are disappearing, infrastructure is eroding, homeownership levels are falling rapidly, foreclosures are sky-high, times are bad, and even the president admits that the political system designated to make things better is “dysfunctional”; in the other, the exits are there, but there’s no rush to use them, not with those global ramparts to be guarded, those wars to be fought, and a massive national security complex—larger than anything ever imagined when the US still faced a nuclear-armed superpower enemy—to feed and cultivate.

Now tell me: What’s wrong with this picture?

Two worlds, two productions, one over-the-top and raising fears of bankruptcy, the other steady as she goes—and (so it seems) never the twain shall meet. And yet look again and those two worlds will fuse before your eyes, those two Washingtons will meld into a single capital city. Then it will be clearer that the actors at center stage and those traveling in the provinces are putting on linked parts of a single performance. The financial problems of one will turn out to be inextricably linked to the other; the lack of an effective stimulus package in the first connected to the endless series of stimulus packages—all that failed “nation-building” in the imperium—in the second.

Like some Roman god, it turns out that schizophrenic Washington has two faces, each reflecting a different aspect of American decline. In one, everybody can spot the madness. In the other, it’s less evident, even though untold American treasure—literally trillions of dollars communities here desperately need—has been poured into a series of wars, conflicts, and war preparations without a victory, or even a significant success on the horizon. (Greeted as if World War II had been won, the killing of Osama bin Laden should have been a reminder of the success of the Global War on Terror for a man with few “troops” and relatively modest amounts of money who somehow managed to land Washington in a financial and military quagmire.)

One American world, one Washington, is devouring the other. Think of this as the half-hidden psychodrama of this American moment.

Put another way, for months Americans have been focused on raising that debt ceiling, as onscreen countdown clocks ticked away to disaster. In the process, few have asked the obvious question: Isn’t it time to lower America’s war ceiling?

Tom Engelhardt, co-founder of the American Empire Project and the author of The End of Victory Culture, runs the Nation Institute’s TomDispatch.com. His latest book is The American Way of War: How Bush’s Wars Became Obama’s (Haymarket Books). To stay on top of important articles like these, sign up to receive the latest updates from TomDispatch.com here.