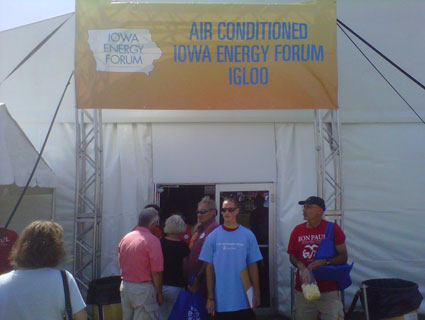 In addition to the tents of the six candidates who paid for the space, the Ames Straw Poll is home to issue-advocacy tents endorsing everything from the fair tax and gun rights to ending poverty and assisting the elderly. The Iowa Energy Forum, which supports a range of Republican-friendly policies and donated $100,000 to the Republican Party of Iowa, has one of the larger operations. It boasts an air-conditioned “igloo” (tent), another tent filled with power strips for poll-goers to recharge their laptops and cell phones, and a stage with a jumbotron screen that played the presidential candidates’ Hilton Coliseum speeches for people without tickets to get inside.

The Iowa Energy Forum’s website calls the organization “a community of concerned Iowa citizens who are dedicated to broadening the public’s understanding of and support for a balanced approach toward increasing our supplies of energy.” Not so visible is the “Sponsored by American Petroleum Institute” at the bottom of the page. Even less clear is that API, the country’s largest oil industry trade group, lobbies for energy giants like BP, Shell, and ExxonMobil. Inside the so-called igloo are displays promoting hydraulic fracturing, the controversial practice of extracting natural gas from shale rock that can lead to groundwater contamination; and TransCanada’s Keystone XL pipeline, which has come under fire for a number of environmental concerns. (Also, two of the group’s members are connected to Tim Pawlenty’s campaign.)

Of course, at an event full of conservative activists, none of this presents much of a concern. But Iowa Energy Forum representatives have been following the Republican presidential contenders around Iowa in the lead-up the the straw poll, passing themselves off as grassroots activists working to wean America off foreign oil. The practice is evidence of a sustained effort by the oil industry to meddle in presidential politics: In 2008, an industry front group pitched its “clean coal” agenda to unsuspecting Democratic voters during presidential campaign stops.

In fairness, the Iowa Energy Forum isn’t hiding the fact that it’s conservative, at least not at the straw poll. Iowa wrestling icon and outspoken Republican Dan Gable signed autographs alongside radio talker Laura Ingraham earlier today to raise awareness of the organization. Local radio-show host Jan Mickelson cohosted an interview with Iowa Republican House Leader Kraig Paulson on the group’s stage; invoking Ronald Reagan, Paulson said, “If something proves to be successful, regulate it. If it starts making money, tax it, and when it stops making money, subsidize it. If we’re not careful, that’s exactly what we’ll do.” 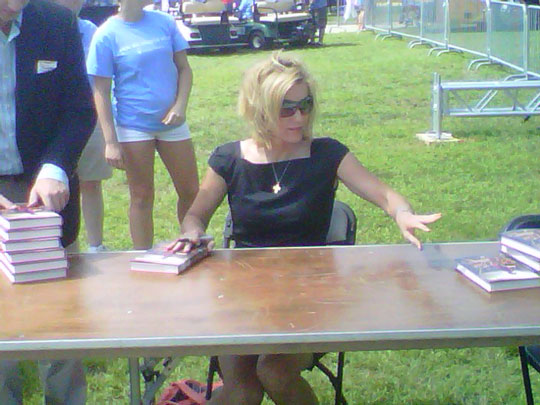 The Iowa Energy Forum has had a big presence in Ames today, thanks to bright orange T-shirts bearing its logo that the group is handing out for free. Joy and Rick Waggoner, from Newell, part of Rep. Steve King’s northwest Iowa district, both wore the shirts. Both Michele Bachmann-supporting tea partiers, their fingers were stained blue indicating that they had voted at the poll. They told me they supported extracting oil from the Dakota shales and drilling for it in Alaska’s Arctic National Wildlife Refuge.