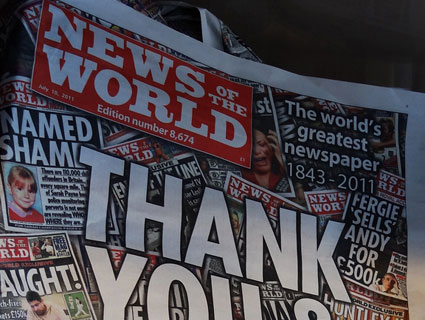 Just when it seemed that the wave of media consolidation had reached tsunami proportions, a new court ruling is easing the troubled waters.

As Amy Miller and Lori Abbot of Public News Service report, the 3rd Circuit Court of Appeals ruled to block revisions to current FCC regulations which would further relax media cross-ownership rules. This ruling is a major victory for media reform advocates who say any further consolidation could severely challenge the notion of a free, independent press.

As previously reported, the new regulations would have likely had an adverse affect on local news reporting and diversity. Making the situation even more awkward is the FCC’s own recently issued media review, which posits the need for more localism and more diversity.

The upshot, write Miller and Abbot, is this: “In addition to preventing one company from owning both print and broadcast stations in the same market, the rulings mean more competition and more opportunity for women and minority ownership of media companies.”

The decision sends a clear message to the FCC that it has a mandate to prioritize public interest over corporate interests, a point it’s been somewhat confused on in the past.

News of the World Scandal Continues

In a case of media behaving badly, the UK’s News of the World—a newspaper owned by Rupert Murdoch, who also owns the US’s Fox News—ceased publication after being caught red-handed in an embarrassing scandal. Reportedly, the paper, which was founded in 1843 and has a circulation of 2.8 million, hacked the cellphones of families of soldiers killed in Afghanistan and Iraq, murder victims (including 13 year-old Milly Dowler), and celebrities. NoTW reportedly deleted voicemails from Dowler’s cellphone, causing her family to believe she hadn’t been killed.

Hitting where it hurts

Blowback from the scandal is hitting Murdoch hard. As blogger John Nichols writes in The Nation, “the damage is running deep, as members of Parliament… have called for placing a hold on the anticipated purchase by News Corp. of British Sky Broadcasting, a hugely-profitable satellite TV enterprise that Murdoch has coveted for years.”

The inquiry by Scotland Yard and the British government is just getting started, Nichols says, adding the sordid episode should raise questions about the Murdoch media empire’s practices in America: “Should Americans be appalled by a scandal in Britain? Certainly.”

Also in The Nation, D.D. Guttenplan blogs about the scandal, which, he notes, “wiped some $2.5 billion off the value of News Corporation, [Murdoch’s] US-based holding company.” The larger issue, however, is that “Rupert Murdoch has been operating what amounts to a private intelligence service” which “gives News Corporation a kind of leverage over inquisitive regulators or troublesome politicians wielded by no other company on earth.”

But wait, it gets worse. As Adele Stan writes for AlterNet, Wall Street Journal CEO Les Hinton, a former executive chairman of Murdoch’s UK operation, has been implicated in the scandal. In 2006, Hinton told Parliament that the hacking was the work of one rogue reporter—a claim which has been revealed to be a lie. The WSJ, Stan says, did not disclose “the role its chief executive played in delivering misleading testimony before the British parliament”—which raises troubling questions about the paper’s ethics, especially considering its ties to the Koch Brothers-funded Americans for Prosperity foundation.

In other media policy-related news:

This week’s blog marks the final edition of the Wavelength, which started last March—right around the time AT&T announced its proposed $39 Billion merger with T-Mobile.

Over the past four months, the implications of the proposed mega-merger have reverberated through both the Beltway and the blogosphere, dominating much of the reportage around media policy. Other top stories included the Microsoft-Skype merger; the outcry over the latest instance of the FCC’s infamous “revolving door”; the ongoing debate over Net Neutrality; and a growing concern over privacy issues with regard to popular social media websites and mobile phones.

We’ve also taken a look at the state of media with regards to freedom of the press, independent journalism and censorship, both in the U.S. and abroad. While this picture has often been depressing – especially when detailing the connections between right-wing media, conservative political agendas, and corporate influence—there’s also plenty of reason for optimism and hope. Bright spots include the potential of alternatives to mainstream media like Low-Power TV to become a home for digital diversity; the ongoing exposes of WikiLeaks; the role of social media in Arab Spring; and reports of new collaborative efforts between international press outlets reporting on corruption and violence in foreign countries.

As we wrap up the Wavelength, we’d like to give a big shout-out goes out to the Media Consortium member organizations who released informative and revealing reporting week after week. As the Murdoch scandal illustrates, this coverage is invaluable, since the notion of “fair and balanced” journalism practiced by Fox News, the WSJ, and other mainstream outlets appears to be as much a hoax as the false hope perpetuated by NoTW that Dowler was still alive.

This post features links to the best independent, progressive reporting about media policy and media-related matters by members of The Media Consortium. It is free to reprint. To read more of the Wavelength, click here. You can also follow us on Twitter.