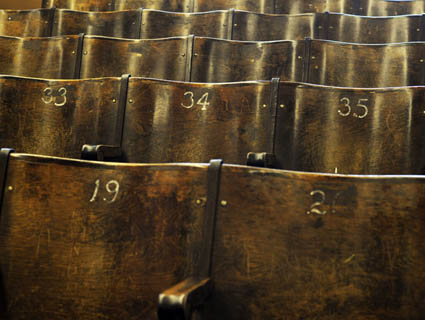 In the middle of getting his MBA, Travis Holden decided that he wanted to become a teacher. Until then, he’d never thought about working in schools. He was a college math major who got a job at a UCLA physics lab after graduation and later worked as a small-business consultant.
But whenever his B-school professors discussed the ways in which emerging countries moved ahead, they spent most of their time talking about how other nations committed their best resources to building great schools and universities. That’s when it hit him.
Two years after Holden got his master’s, he enrolled in an alternative teaching credential program run by California Teachers Corps (CTC) for people with backgrounds in science, technology, engineering, and math. Holden, 36, has been teaching high-school math at a predominantly Latino high school in Los Angeles for six years now.

Teachers like Holden are good news for struggling schools. Close to half of the nation’s teachers are expected to retire in the next decade, and attrition rates are high: 1 in 3 teachers leave the profession within five years, and the high turnover impacts low-income schools the most. President Obama often talks of shortages of math and science teachers, especially in large, urban schools, and has vowed to recruit over 10,000 in the next decade.

CTC provided nearly half of California’s new math and science teachers last year, according to founding president Catherine Kearney. About 70 percent of its recruits continue teaching after five years. I caught up with Holden at the end of his work day at the South Gate Senior High School in Los Angeles. He talked about his journey so far and offered advice for anyone considering a second career in teaching.

Mother Jones: Why did you decide to leave the science and business worlds to teach?

Travis Holden: I wasn’t that person who always knew that they wanted to teach. But as we studied how emerging countries move ahead at the business school, education kept coming up. I’d talk to my wife, who is a teacher, and it sounded like education today was very much the same when I was at school: very procedural, sit down and listen, and that’s not what was happening in my science lab where I worked. It was always related to real needs, and we would then apply math to it. There was a lot of collaboration and problem-solving. So, I really wanted to teach science that way. Connect a real-world problem that students can relate to and apply mathematics to solve it.

MJ: What was your school like? Did you have a good math teacher?

TH: I went to a public high school in Florida. My math teacher was very good, but he also lectured, and there was very little problem-solving and connections to real world. That works for students who are already excited about math. But for the vast majority of students, that kind of teaching doesn’t work.

MJ: Tell us more about the year of training with CTC.

TH: I knew math, so the focus was on how to teach mathematics, the craft of teaching. We looked at how students learn best, how they engage, how to relate new learning with prior learning. We also talked about students with high needs. Many of the students I teach in high school failed algebra in middle school. What are the needs of certain types of students with high language needs, or those who haven’t been successful in math prior to entering our class?

We go through as a cohort, and I can’t overstate the importance of having people from the same industries in the same program. We had similar experiences and sharing that was very important. I don’t think I would have continued through the program unless I had that cohort of people who knew what I was going through. They already had a family, they had a job with more money, and while collaboration in schools is pushed, it is very minimal. There isn’t a lot of time for adults to talk to each other.

I also really liked the idea of going through a program that’s only a year long. And I couldn’t do it without getting paid right away, at the same rate as an entry level teacher in LA.

MJ: What were some things in the first year of teaching that you were not prepared for at all?

TH: I wasn’t prepared for a lot of things right away. Even though I had a lot of support, you are not prepared for students to be behind as much they are in many cases. You are not prepared for many of the things students have going on at home. I didn’t have a lot of money growing up either, and I was raised by my grandmother. So, I was prepared for some challenges, but not all. Many of my students are raised by single parents, or grandparents, many of them are living with aunts of uncles. I took a class that another teacher was exiting and it was challenging, but luckily going through this program, I was talking to other teachers constantly about daily issues.

MJ: Most teachers tell me that it takes at least five years to feel like you know what you are doing. Do you feel like you are getting close to that?

TH: It’s my sixth year, and I’m better, and feel like I’m improving every year. And it is my goal to keep improving every year. But no, I haven’t nailed it, but I do feel like I know what I’m doing in the classroom, and what it takes for students to improve. I know how to relate to my students and get them interested a whole lot more, but improvement never ends. I do think of myself as an effective teacher, but not all my students are passing.

MJ: How do you feel about the quality of the national debate on education reform?

TH: There are a lot of gaps. So much goes into educating a child. There is what teachers do, what schools do, what the country does, what parents do. There are so many variables. Teachers are the focal point, and should be. But from my vantage point though, I think there should be more support for teachers. As a country, we think too much sometimes about evaluations and measurements. It’s also important to figure out how we support teachers better to help them become more effective. Not necessarily because they are bad, but simply because the times are changing. There is a lot that’s necessary to help students go from where they are now to being proficient in this modern world. For example, how do we help students use technology for learning, not as distractions?

When I look at charter schools, I think they are great. I know a lot of great charter schools. But in some ways, they are limited. They are able to take a few students and few teachers and often they are successful and often they are not. But what do we do to improve the entire system of public education? It’s really important to bring innovation and piloting to public schools. Increasing the number of charters without addressing all of the other variables won’t do it.

MJ: What kind of teacher support would you like to see?

TH: I really think focusing on bringing real-world applications to the classroom is urgent. Making it relevant to students. For example, I just learned about using mobile phones for learning. In our district we can’t do that, and I understand that since its used as a distraction. But how do we move these applications to help students learn? Students are interested in games, mobile phones, and social networking. Teachers need to be trained more in this. Bringing people from a variety of industries into education will help with that. I don’t want to generalize, but many teachers who haven’t worked in any industries tend to be not as open to bringing new things into classrooms. A lot of teachers say: I learned it this way, why can’t my students learn it the same way?

I’d like to see collaborations between local businesses and schools. Businesses often give experiences that you can’t get at the school: project-based learning, realistic campaigns. They are trying to solve real issues and it becomes more meaningful to the students.

MJ: What advice would you give to someone considering a switch in their career to teaching? Why should an engineer making $100,000 leave his job and go teach?

TH: First of all, save up as much as you can before you go. It’s actually not that bad in terms of money. You start out in LA with $45,000 and your salary moves up pretty quickly to $70,000. But it’s really challenging in the first five years.

Teaching doesn’t give you satisfaction all of the time. It comes in little daily or weekly spurts. I often have students who some people say are going to drop out. But they come back and talk about the fact that they felt that I cared and they learned a lot. This is the kind of feedback that I’d never get on any other job. When students come to you and say that you made a difference, there is nothing else that’s similar.