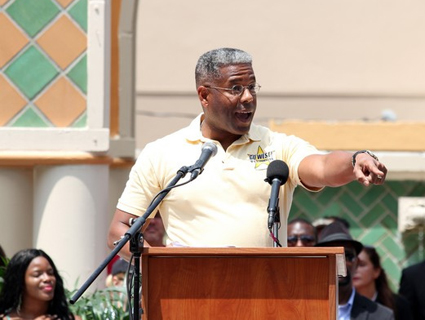 On Tuesday evening, Rep. Allen West (R-Fla.) announced to the House Republican caucus that he would “drive the car” on Speaker John Boehner’s bill to raise the debt ceiling. On Thursday, even as it became painfully clear that Boehner didn’t have the votes to push his plan through, the freshman tea partier stood by his Speaker. And that, according to a handful of tea party groups, is a betrayal they won’t forget. The Hill’s Alicia Cohn reports:

Tea Party leaders want West and the others to know they consider voting for Boehner’s plan “caving in” and it could mean losing the support of the Tea Party in 2012.

Well, no. This would be a big deal—tea partiers revolt against tea partiers!—if any of these groups really had any power or a membership base. As my colleague Stephanie Mencimer explained yesterday, many of the “tea party leaders” who find themselves quoted in the press really aren’t the leaders of anyone at all.

The Tea Party Patriots American Grassroots, which isn’t listed in that particular story in The Hill but is frequently cited as a leading tea party organization, held a rally at the Capitol on Wednesday to show their opposition to raising the debt ceiling. Thirteen people showed up. If Jim DeMint and Americans for Prosperity start taking potshots at West, he might want to take notice. But these smaller groups pose about as much of a threat to the bomb-throwing congressman as the Muslim Brotherhood.

Update: West was asked about this just now on Laura Ingraham’s radio show, and he’s not backing down, insisting that abandoning Boehner would give Democrats what they want. Here’s his—surprise!—military analogy: “It would be just the same as if you’re in a combat operation and you’re supposed to be attacking in a certain direction and you refuse to attack or you just attack in a different direction and you split your force and you create a gap by which the opposition can defeat you.” The segment ends with Ingraham promising to campaign for West.

Update II: And now things just got weird. Tea Party Nation founder Judson Phillips just blasted out an email denying that his organization, such as it is, had ever threatened a primary challenge against West: “The group that put this press release out used Tea Party Nation’s name without our permission. No one at TPN was shown this press release in advance. Had we been shown that press release, we would have vetoed the use of our name.” So, once more: No, tea partiers are not really targeting Allen West.