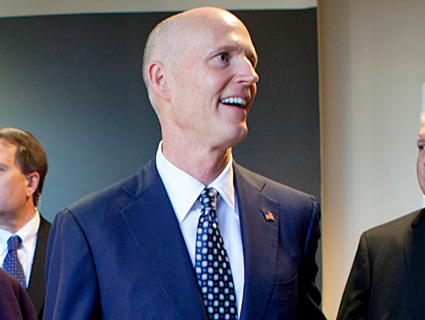 Embattled Florida governor Rick Scott had to scuttle another one of his big plans yesterday. The plan was to create a Hall of Fame for the state’s prominent military veterans—with him as an inaugural inductee.

Scott, a Navy vet (more on his service record in a sec), was joined on the list of inductees by exactly zero Medal of Honor recipients. Not Fort Lauderdale’s local hero, Sandy Nininger, who died in hand-to-hand combat trying to keep the Japanese from overrunning the Philippines in 1942. Not Bud Day of Ft. Walton Beach, the “most decorated US service member since General Douglas MacArthur,” who was a POW in Vietnam (and a Swift Boater during the 2004 election). Not Paul R. Smith of Tampa, who manned a machine gun to protect his company of 100 soldiers in the 2003 battle for Baghdad’s airport—and who posthumously received the first Medal of Honor awarded in the Iraq war.

Who else was on the VIP list of Florida military heroes? Six former state governors who fought in the Civil War on the losing side. One, Abraham Allison, assumed office in 1865 when his predecessor realized the Confederate cause was lost and committed suicide. Allison then went into hiding, was arrested by federal troops, and served six months in prison for his role in oppressing the Sunshine State’s slave population.

To be fair, Scott didn’t create the Veterans Hall of Fame, and his office says he didn’t know he’d be on the list. But the plan for constructing the hall and its list of inductees are the responsibility of the state’s Department of Veterans Affairs, which is run by Mike Prendergast, who, until last month, was Scott’s chief of staff. Public anger over the list of honorees has forced Scott to withdraw his name from consideration; Prendergast has also promised to compose a new list from scratch. “It’s obvious someone didn’t do their homework,” Senate Minority Leader Arthenia Joyner told the media. “Are there really no better qualified military veterans—black, white or Latino, male or female—more deserving of such a tribute?”

What were the guv’s qualifications for inclusion in the hall of heroes? According to Military Times, he served two and a half years as a radioman on a frigate in the early ’70s. And no, his ship didn’t see action at Yankee Station off Vietnam; it “spent time in dry dock in Boston and sailed to ports in Bermuda and Puerto Rico during his enlistment,” the paper reports.

Earlier this year, Scott bragged to reporters about the defining moment of his Navy career: The point when he realized he could turn a profit by selling retail goods to his shipmates at a steep markup. He detailed his business plan at a press conference:

Scott demonstrated his special business acumen as a sailor on the USS Glover. When the ship stopped selling soft drinks, Scott said the Navy let him bring his own cans of soda pop onboard. For the record, Scott sold Pepsi, Coke and 7-Up. “And so I would go get as much money as we had in the bank. I would go buy all the soft drinks that I could for a cruise and then I would double the price and I made more money selling soft drinks on the ship than I did in getting my pay.”

It’s unclear when a revamped list of inductees, sans Scott, will be made public. Nor is it apparent whether the six Confederates will make the final cut. Prendergast certainly left the door open when Military Times asked him those questions. “We are committed to including a diverse array of highly distinguished veterans of all eras who served Florida and the nation,” he explained.