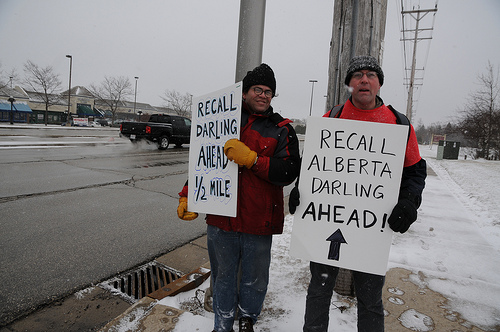 On Tuesday, Wisconsin voters hit the polls for the first round of voting in this summer’s recall elections, targeting a slate of state senators who raised the public’s ire during the labor union battle earlier this year. For the most part, the recalls center on six Republican senators who voted for Gov. Scott Walker’s anti-union budget bill, and who now face the wrath of angry voters. But Tuesday’s primary vote was noteworthy if only because it featured a number of Republicans posing as Democrats in order to knock off the serious Democratic challengers.

It was a dubious and much criticized strategy, and to the relief of Wisconsin Democrats, no phony Dems won. The real Democrats cruised through the primary, winning by wide margins in five of the six races and setting up competitive general recall elections on August 9. You could argue, however, that the dummy Dems succeeded in one area: their entrance in the recall races delayed the general elections by about a month, giving the targeted Republicans more time to fundraise and prepare for the recall.

Here’s the Milwaukee Journal Sentinel on the run-up to next month’s recall vote:

Already the conservative Club for Growth and a liberal coalition called We Are Wisconsin, supported by contributions from national unions, are active in the state. The conservative Americans for Prosperity, which has been connected with the national tea party movement, is operating a phone bank in Kenosha County this week.

In addition to the outside money, both Democratic challengers and Republican incumbents have substantial campaign war chests of their own—with the most money likely to be spent in Darling’s Milwaukee-area district. Darling and Pasch have raised nearly $1.4 million between them, with Darling collecting the lion’s share, some $958,000.

There’s also what politicians call a strong ground game in operation in many of the districts—plenty of people out knocking on doors.

Republicans aren’t the only ones in the recall crosshairs. Three state senate Democrats have been targeted as well. The lawmakers faced voter blowback after they left the state in February during the fight over Walker’s budget bill, depriving state senate GOPers of a quorum and temporarily blocking a vote on the bill.

That bill, of course, was ultimately passed by the GOP-controlled legislature and signed by the governor in March. Unions and local officials immediately filed suit, challenging its legality and the procedure used to pass the bill in the first place. Those challenges delayed the bill’s implementation for a time, but failed in the end. The law—which curbs collective bargaining rights for public-sector unions and makes it more difficult to collect dues and retain union members—took effect last month.