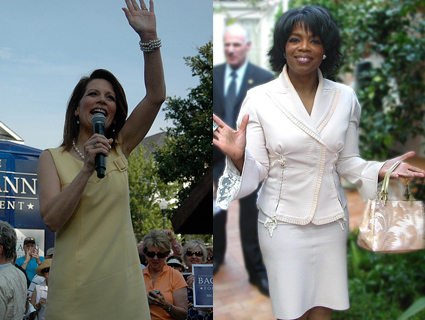 A while back we told you about Rep. Michele Bachmann’s longtime friendship with Jan Markell, the host of a radio show devoted to interpreting current events through the lens of Biblical prophecy. Bachmann has been a regular on Markell’s program, where she’s discussed topics like “one-world currency,” an issue that adherents of Biblical prophecy believe to be a catalyst for the Antichrist.

Bachmann also attended and wrote a testimonial for one of Markell’s annual conferences, where she praised another speaker who explained that natural disasters are God’s punishment for betraying Israel. (Bachmann herself has said that the US will be cursed if it turns away from Israel.) Despite all of this, Bachmann has denied any knowledge of Markell or her ministry. According to Markell, though, the two have known each other for 30 years.

Now, in an interview with the American Family Association’s OneNewsNow, Markell offers a personal endorsement for Bachmann: “This woman is a wonderful Christian; she is as pro-Israel as they come. I cannot speak highly enough of Congresswoman Michele Bachmann and her stand on all things righteous.”

Meanwhile, here’s an excerpt from the most recent newsletter from Markell’s ministry. It’s written by another minister, Heidi Swandler, but Markell includes a statement saying that she endorses Swandler’s prose. It includes this passage:

“The New Age is upon us and we are witnessing the birth pangs of the new culture and the new civilization. This is now in progress. That which is old and undesirable must go . . . The spirit has gone out of the old faiths and the true spiritual light is transferring itself into a new form which will manifest on Earth eventually as the New World Religion.” So said occultist Alice Bailey (1880-1949) while under the influence of her spirit guide, Djwal Khul. As I wrote in an article last March, Bailey and her demonic counterpart actually laid the foundation for the New World Order. The New World Religion piece of that coming global order is advancing successfully on at least three fronts.

The author goes on to pinpoint Oprah Winfrey as a leading advocate of the New World Order and a global religion. (That explains her new cable network!) Kooky as this might sound, it’s a pretty common view. One of the first orders of the business for the Antichrist in the bestselling Left Behind novels is to create a new world religion. Not coincidentally, he also goes about converting the world—the “Global Village”—to a single, global currency. In that context, Oprah’s support for New Age spirituality is seen as an existential threat, and helps to explain why some people think she’s a harbinger of doom.

Anyways, given the prevalence of that line of thinking, it would be somewhat extraordinary if Bachmann was not aware of the loaded connotation of “one-world currency” when she went on Markell’s Biblical prophecy radio show in 2009 and used that exact phrase. It would be all the more so considering Markell herself mentioned the Antichrist in their interview. Was it a dog-whistle, or reflective of the congresswoman’s beliefs? So far Bachmann has dodged such questions, but with 17 months to go before Election Day, it’s hard to see that lasting.