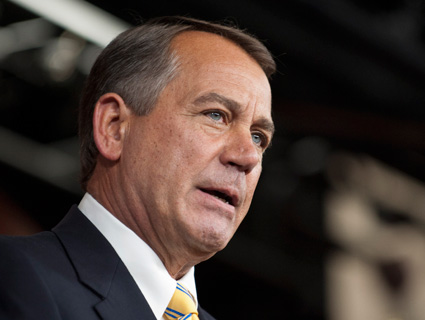 What does the news media do when a critical national debate is tainted by a lie? Not a whole lot.

During the debt ceiling showdown, the Republicans have clearly calculated that an effective charge to hurl at President Barack Obama and the Democrats is that the president, by asking Congress to raise the debt ceiling (which used to be a routine maneuver for Capitol Hill), is requesting a “blank check” for government spending.

In his response to Obama’s speech on Monday evening, House Speaker John Boehner claimed that Obama “wants a blank check” for a spending binge that is “sapping the drive of our people.” Earlier in the day, Boehner slammed Sen. Harry Reid’s last-ditch debt plan, which the White House supports, as a “blank check.” On Monday morning, House Majority Leader Eric Cantor issued a statement: “We have worked for months to back the President and Congressional Democrats away from their demand for a blank check to keep spending.” On Tuesday morning, the Republican National Committee sent out a fundraising email with the subject head, “Stop Obama’s Blank Check.” If you’d like to join the Republicans in “taking away Obama’s blank check,” you could send “$25, $50, $100, or more” to the RNC. On Tuesday afternoon, the National Republican Congressional Committee tweeted, “The President of No: Obama Continues to Insist on a Blank Check for More Spending.” And Boehner, in desperate search of conservative support for his debt-ceiling/deficit-reduction plan, called Rush Limbaugh and vowed he wouldn’t give Obama a blank check.

Raising the debt ceiling is not equivalent to dispensing a blank check. In fact, Republicans, in Orwellian fashion, are turning black into white. With a blank check, a bearer is free to write (and then spend) any amount he or she places on the note. Thus, a blank check enables future spending. Raising the debt ceiling is about permitting the US government to cover past spending—and the blank checks of the past. These particular blank checks were issued by the Republicans during the Bush years. They voted (with the help of some Democrats) for wars in Afghanistan and Iraq without budgeting for them. They did the same with a Medicare prescription-drug benefit. They also green-lighted President Bush’s tax cuts without accounting for the drop in revenue they would cause. Together these blank checks account for two-thirds of the deficit, if not more. (See this chart.) By claiming the debt ceiling is the problem, the Republicans are blaming the bank for the bank robber’s action.

Moreover, raising the debt ceiling does not hand Obama any more authority to spend. Congress controls spending—and the Republicans control the House and have filibuster power within the Senate. If Republicans want to clamp down on spending, they can endeavor to do so through the appropriations process. Holding the line on the debt ceiling will not turn off any spigot. The United States will continue to run up debt; the government just won’t be able to pay its bills—which will likely lead to greater interest rates and, consequently, more debt.

None of this has prevented Republicans from deploying the blank-check accusation. Their heavy reliance on this rhetorical ammo suggests it’s been poll-vetted and focus-group-tested. When the political battle at hand involves government accounting—a matter that most Americans are not that familiar with—a simple and easy-to-understand metaphor can be rather helpful. After all, how many independent voters want a president with a blank check?

The GOP is peddling a potent lie. And Boehner and his comrades are able to get away with it because within the current political-media culture there is not much of a penalty for exploiting lies. Reporters toiling for supposedly objective outlets tend to focus on charge and countercharge. (He said it was a lie; he replied that it was not a lie.) Sure, there are fact-checking outfits run by the mainstream media. (I’ve yet to see one pronounce a verdict on the “blank check” charge.) But usually their disapproval does little to stop a politician from repeating a falsehood. (Here’s a rare example of Boehner being hammered on this front.)

Boehner’s effort to misrepresent the basics of the debt ceiling debate ought to discredit him. Instead, the Republicans seem proud that they have concocted a clever charge. It’s become the core of their quarrel with the president. And it doesn’t seem to matter that it’s rotten to the core.