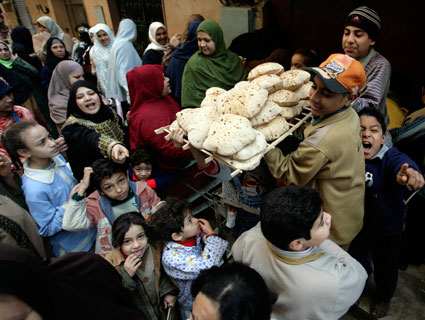 A crowd gathers outside a bakery in Cairo, Egypt, that sells government-subsidized bread.<a href="http://www.flickr.com/photos/nassernouri/5103679620/">Nasser Nouri</a>/Flickr

What can a humble loaf of bread tell us about the world?

The answer is: far more than you might imagine. For one thing, that loaf can be “read” as if it were a core sample extracted from the heart of a grim global economy. Looked at another way, it reveals some of the crucial fault lines of world politics, including the origins of the Arab spring that has now become a summer of discontent.

Consider this: Between June 2010 and June 2011, world grain prices almost doubled. In many places on this planet, that proved an unmitigated catastrophe. In those same months, several governments fell, rioting broke out in cities from Bishkek, Kyrgyzstan, to Nairobi, Kenya, and most disturbingly, three new wars began in Libya, Yemen, and Syria. Even on Egypt’s Sinai Peninsula, Bedouin tribes are now in revolt against the country’s interim government and manning their own armed roadblocks.

And in each of these situations, the initial trouble was traceable, at least in part, to the price of that loaf of bread. If these upheavals were not “resource conflicts” in the formal sense of the term, think of them at least as bread-triggered upheavals.

Bread has classically been known as the staff of life. In much of the world, you can’t get more basic, since that daily loaf often stands between the mass of humanity and starvation. Still, to read present world politics from a loaf of bread, you first have to ask: of what exactly is that loaf made? Water, salt, and yeast, of course, but mainly wheat, which means when wheat prices increase globally, so does the price of that loaf—and so does trouble.

To imagine that there’s nothing else in bread, however, is to misunderstand modern global agriculture. Another key ingredient in our loaf—call it a “factor of production”—is petroleum. Yes, crude oil, which appears in our bread as fertilizer and tractor fuel. Without it, wheat wouldn’t be produced, processed, or moved across continents and oceans.

And don’t forget labor. It’s an ingredient in our loaf, too, but not perhaps in the way you might imagine. After all, mechanization has largely displaced workers from the field to the factory. Instead of untold thousands of peasants planting and harvesting wheat by hand, industrial workers now make tractors and threshers, produce fuel, chemical pesticides, and nitrogen fertilizer, all rendered from petroleum and all crucial to modern wheat growing. If the labor power of those workers is transferred to the wheat field, it happens in the form of technology. Today, a single person driving a huge $400,000 combine, burning 200 gallons of fuel daily, guided by computers and GPS satellite navigation, can cover 20 acres an hour, and harvest 8,000 to 10,000 bushels of wheat in a single day.

Next, without financial capital—money—our loaf of bread wouldn’t exist. It’s necessary to purchase the oil, the fertilizer, that combine, and so on. But financial capital may indirectly affect the price of our loaf even more powerfully. When there is too much liquid capital moving through the global financial system, speculators start to bid-up the price of various assets, including all the ingredients in bread. This sort of speculation naturally contributes to rising fuel and grain prices.

The final ingredients come from nature: sunlight, oxygen, water, and nutritious soil, all in just the correct amounts and at just the right time. And there’s one more input that can’t be ignored, a different kind of contribution from nature: climate change, just now really kicking in, and increasingly the key destabilizing element in bringing that loaf of bread disastrously to market.

When these ingredients mix in a way that sends the price of bread soaring, politics enters the picture. Consider this, for instance: The upheavals in Egypt lay at the heart of the Arab Spring. Egypt is also the world’s single largest wheat importer, followed closely by Algeria and Morocco. Keep in mind as well that the Arab Spring started in Tunisia when rising food prices, high unemployment, and a widening gap between rich and poor triggered deadly riots and finally the flight of the country’s autocratic ruler Zine Ben Ali. His last act was a vow to reduce the price of sugar, milk, and bread—and it was too little too late.

With that, protests began in Egypt and the Algerian government ordered increased wheat imports to stave off growing unrest over food prices. As global wheat prices surged by 70 percent between June and December 2010, bread consumption in Egypt started to decline under what economists termed “price rationing.” And that price kept rising all through the spring of 2011. By June, wheat cost 83 percent more than it had a year before. During the same time frame, corn prices surged by a staggering 91 percent. Egypt is the world’s fourth-largest corn importer. When not used to make bread, corn is often employed as a food additive and to feed poultry and livestock. Algeria, Syria, Morocco, and Saudi Arabia are among the top 15 corn importers. As those wheat and corn prices surged, it was not just the standard of living of the Egyptian poor that was threatened, but their very lives as climate-change driven food prices triggered political violence.

In Egypt, food is a volatile political issue. After all, one in five Egyptians live on less than $1 a day and the government provides subsidized bread to 14.2 million people in a population of 83 million. Last year, overall food-price inflation in Egypt was running at more than 20 percent. This had an instant and devastating impact on Egyptian families, who spend on average 40 percent of their often exceedingly meager monthly incomes simply feeding themselves.

World Bank President Robert Zoellick fretted that the global food system was “one shock away from a full-fledged crisis.”

Against this backdrop, World Bank President Robert Zoellick fretted that the global food system was “one shock away from a full-fledged crisis.” And if you want to trace that near full-fledged crisis back to its environmental roots, the place to look is climate change, the increasingly extreme and devastating weather being experienced across this planet.

When it comes to bread, it went like this: In the summer of 2010, Russia, one of the world’s leading wheat exporters, suffered its worst drought in 100 years. Known as the Black Sea Drought, this extreme weather triggered fires that burnt down vast swathes of Russian forests, bleached farmlands, and damaged the country’s breadbasket wheat crop so badly that its leaders (urged on by western grain speculators) imposed a year-long ban on wheat exports. As Russia is among the top four wheat exporters in any year, this caused prices to surge upward.

At the same time, massive flooding occurred in Australia, another significant wheat exporter, while excessive rains in the American Midwest and Canada damaged corn production. Freakishly massive flooding in Pakistan, which put some 20 percent of that country under water, also spooked markets and spurred on the speculators.

And that’s when those climate-driven prices began to soar in Egypt. The ensuing crisis, triggered in part by that rise in the price of our loaf of bread, led to upheaval and finally the fall of the country’s reigning autocrat Hosni Mubarak. Tunisia and Egypt helped trigger a crisis that led to an incipient civil war and then western intervention in neighboring Libya, which meant most of that country’s production of 1.4 million barrels of oil a day went off-line. That, in turn, caused the price of crude oil to surge, at its height hitting $125 a barrel, which set off yet more speculation in food markets, further driving up grain prices.

And recent months haven’t brought much relief. Once again, significant, in some cases record, flooding has damaged crops in Canada, the United States, and Australia. Meanwhile, an unexpected spring drought in northern Europe has hurt grain crops as well. The global food system is visibly straining, if not snapping, under the intense pressure of rising demand, rising energy prices, growing water shortages, and most of all the onset of climate chaos.

And this, the experts tell us, is only the beginning. The price of our loaf of bread is forecast to increase by up to 90 percent over the next 20 years. That will mean yet more upheavals, more protest, greater desperation, heightened conflicts over water, increased migration, roiling ethnic and religious violence, banditry, civil war, and (if past history is any judge) possibly a raft of new interventions by imperial and possibly regional powers.

And how are we responding to this gathering crisis? Has there been a broad new international initiative focused on ensuring food security for the global poor—that is to say, a stable, affordable price for our loaf of bread? You already know the sad answer to that question.

Instead, massive corporations like Glencore, the world’s largest commodity trading company, and the privately held and secretive Cargill, the world’s biggest trader of agricultural commodities, are moving to further consolidate their control of world grain markets and vertically integrate their global supply chains in a new form of food imperialism designed to profit off global misery. While bread triggered war and revolution in the Middle East, Glencore made windfall profits on the surge in grain prices. And the more expensive our loaf of bread becomes the more money firms like Glencore and Cargill stand to make. Consider that just about the worst possible form of “adaptation” to the climate crisis.

So what text should flash through our brains when reading our loaf of bread? A warning, obviously. But so far, it seems, a warning ignored.

Christian Parenti, author of the just-published Tropic of Chaos: Climate Change and the New Geography of Violence (Nation Books), is a contributing editor at The Nation magazine, a Puffin Foundation Writing Fellow at the Nation Institute, and a visiting scholar at the City University of New York. His articles have appeared in Fortune, the New York Times, the Washington Post, and Mother Jones, among other places. He can be reached at Christian_parenti@yahoo.com. To listen to Timothy MacBain’s latest TomCast audio interview in which Parenti discusses the origins of his latest book and how climate change contributes to global violence, click here, or download it to your iPod here. To stay on top of important articles like these, sign up to receive the latest updates from TomDispatch.com here.