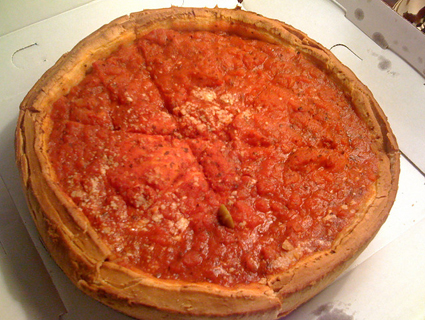 There’s something about running a major pizza company that brings out the crazy in people. You’re probably aware of Herman Cain, the former Godfather’s Pizza CEO who’s currently running for president on a platform of protecting the Mexican border with a giant army of alligators and only signing bills that are less than three pages long. You may know about Domino’s founder Tom Monaghan, who built his own theocratic township in Central Florida, to house his arch-conservative Ave Maria School of Law. (The original location, in Michigan, fell through after the town blocked his proposal to build a 250-foot crucifix.) Now meet John Apostolou, embattled former owner of Giordano’s, a Chicago-based deep-dish establishment with more than three dozen locations. Per the Chicago Tribune:

Apostolou’s lawyer admits that his client made some mistakes that resulted in losing control of the business while in bankruptcy.

The biggest mistakes are unusual documents Apostolou filed in court by himself in which he improperly tries to terminate the bankruptcy, alleging fraud and other misdeeds. The documents included an affidavit also signed by his wife, Eva, in which they claim they don’t recognize U.S. currency and are free of any legal constraints.

Apostolou, you see is a sovereign citizen. He subscribes to an anti-government ideology that says that the laws of the United States do not apply to him because he is his own sovereign nation. The Republic of John Apostolou. Or perhaps, Apostolouovia. It’s an ideology originally promoted by white supremacists, but has since been adopted by Baltimore gang members, Orlando police officers, and Wesley Snipes. At its best, it’s paper terrorism, but sovereigns are prone to militancy too (witness: Ruby Ridge).

That all makes Apostolou’s story pretty weird, but it’s not Arizona weird. Which is where Marshall Home™ gets involved. Home™, whose name is actually trademarked, is an Arizona-based sovereign citizen who’s currently running for Mayor of Tucson as a Democrat. As Blog for Arizona explains, “He claims to have a series of $500 million dollar default claims against a series of Arizona public officials, including [Governor Jan] Brewer, [Secretary of State Ken] Bennett, and [State Treasurer Dean] Martin, totaling $3.5 billion. He admits that he considers these judgments as part of his estate.” For that reason, he also considers himself a billionaire. Sometime in the recent years, he began offering the embattled pizza baron advice on how to get back on firm financial footing. It involved lots of shady paperwork:

Last month, Home filed papers with the bankruptcy court claiming he had a $150 million lien against Giordano’s. [Bankruptcy trustee Phillip] Martino called Home’s claim “fraudulent” and is concerned that Home will become a major distraction.

Maybe it’s something in the sauce.