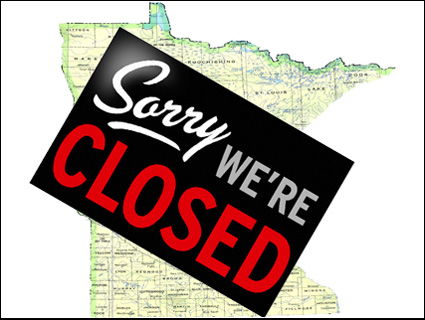 On Friday, barring a last-minute deal between Democratic Gov. Mark Dayton and GOP lawmakers, the Minnesota state government will officially go into shutdown mode. Portions of interstate highways will close. So will state parks, rest areas, DMVs, and the Minnesota Zoo (the animals will still be fed, per a judge’s order).

The immediate source of the impasse centers on how to close the state’s $6.2 billion budget deficit—the fourth largest in the nation, as a percentage of the overall budget. In many ways, it’s a microcosm of the larger debate that’s playing out in Washington, DC, with a wrinkle: The man who helped put the state into this mess is now running for president.

Although Tim Pawlenty talks a lot about fiscal responsibility, critics in Minnesota—including Arne Carlson, another former two-term Republican governor there—are framing the looming shutdown as the ultimate legacy of his governorship, which drew to a close in January. They accuse his administration of fuzzy accounting that gave the illusion of austerity while setting the state up for disaster.

Pawlenty, who has promised to deliver China-like annual GDP growth of 5 percent if elected, has made his fiscal record in St. Paul the foundation of his campaign. “I’ve got experience in Minnesota as governor, in tackling spending, I’ve balanced budgets,” he said on the Today Show last month. “When it comes to getting this federal government spending and deficit and debt under control, I’ve got a record of actually doing that.” And he did it all, he likes to note, without once raising taxes.

But there is a catch: Although he did make plenty of “tough” (his adjective of choice) reductions in spending—cutting funding to public services like health care, for instance—he also adopted many of the same practices he accuses President Obama of using, like deferring the costs for spending projects onto future taxpayers.

Pawlenty turned in balanced budgets, Carlson explains, but only superficially. When he wasn’t skirting his pledge not to raise taxes by using linguistic jujitsu—turning a sales tax increase on cigarettes into a “health impact fee,” for instance—Pawlenty was simply redistributing the burden, from St. Paul to local authorities, or to the taxpayers themselves. According to Carlson, property taxes increased by $716 million in the eight years before Pawlenty took office; over his eight years as governor, they jumped by $2.5 billion. As Minneapolis Mayor R.T. Rybak, a Democrat, noted in April: “If the tea party really knew how much Tim Pawlenty raised taxes in Minnesota, they would throw him in Boston Harbor.”

Those stealth tax hikes were buttressed by accounting gimmicks. In some cases, payments would be pushed back a few days until after the start of a new fiscal year, creating the false impression that the deficit had in fact been erased. In other cases, he stole from Peter to pay St. Paul. Pawlenty raided the coffers of select state agencies in order to provide a short-term patch for others—a strategy the Minnesota Taxpayers Association has called “budgetary duct tape.” Pawlenty took $1 billion from a settlement with tobacco companies that had been earmarked for health care services and used it for the general budget. He borrowed another $1.4 billion from the state’s K-12 education fund. And he quietly accepted $2.3 billion in stimulus funds while publicly lambasting the American Recovery and Reinvestment Act.

The duct-tape line is particularly apropos because it’s a phrase Pawlenty himself is fond of using to describe President Obama’s policies. In his 2011 book, Courage to Stand, he constructs an elaborate metaphor involving the Troubled Asset Relief Program (TARP), an actual tarp, a picnic blanket, and duct tape to describe the financial crisis. “When the rain started to fall on America’s picnic, Washington hung up a big old plastic tarp to protect us from the deluge,” he wrote. “The problem was, the rain just kept coming. The tarp started sagging in the middle and filling up with water. Poke it with a broom handle all you want, try to drain some of that water off the sides, but the blanket below is getting awfully wet in the meantime. Everyone can see the tarp’s starting to tear at the seams, and we’ve run out of duct tape.”

Beyond shifting funds around, Pawlenty’s budget shell games relied on other tricks. For instance, Pawlenty’s wonks used inflation-adjusted figures to calculate the government’s projected revenues (to derive a higher figure), but they declined to use inflation projections to calculate future expenditures (which would also, of course, increase with inflation). The result was meaningless paper surpluses.

Pawlenty has blamed the state’s present fiscal woes on a national economy gone south, noting that when it comes to deficits, Minnesota’s hardly an outlier—North Dakota was the only state without one this year. He also says the state budget office’s projected deficit is built on the unrealistic assumption that spending would necessarily increase by 27 percent over the next two years. “If they had just spent single-digit increases, not 27 percent, they wouldn’t even have a deficit,” he said in April. “It’s a complete fiction. It is a government out of control on autopilot.” (The non-partisan fact-checking site PolitiFact, though, has affirmed the accuracy of the 27-percent figure.)

Dayton and Republican leaders finished the five-month regular legislative session without reaching an agreement on how to balance the state’s budget as required by law, and they must reach a deal before Thursday at midnight to avert a shutdown. As Minnesota Public Radio has reported, the two sides are about $1.8 billion apart, with most of the debate centering on how much to cut from the state’s health and human services programs.

Carlson, who served as Minnesota’s chief executive from 1991 to 1999, marvels at how Pawlenty has distanced himself from the state’s budget crisis. “He turns around and says, ‘Gee, I have nothing to do with the current deficit.’ Well, that’s interesting!” Carlson says. “You can’t say the new governor created the deficit. You can’t say the new legislature created the deficit. If the outgoing governor didn’t create the deficit, my heavens, who did? We should have a search party to find out who did it!”

Carlson endorsed President Obama in 2008, in part because he was uncomfortable with the attacks leveled by fellow Minnesotan Rep. Bachmann (who suggested, among other things, that the Democratic nominee harbored “anti-American” views). He hasn’t suddenly become a liberal, though. Carlson says he doesn’t know whom he’ll support in 2012—former Utah Gov. Jon Huntsman intrigues him—and he scolds the president for failing to adopt the proposal offered by Alan Simpson and Erskine Bowles to knock down the long-term budget deficit. “He has not come up with a plan that is serious,” he says of Obama.

Pawlenty, who’s currently floundering in the polls in Iowa and trailing even Obama-appointee Huntsman in New Hampshire, is asking voters to take a look at his home state to see what he accomplished. But starting tomorrow, he may not like what they’ll find—big signs, from Moorhead to Minneapolis, with a simple message: “Sorry, we’re closed.”