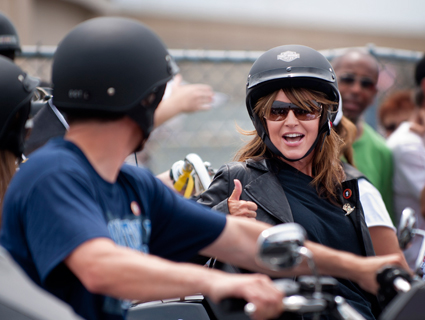 On Thursday, former Alaska Governor Sarah Palin passed through Boston as part of her totally-not-a-presidential-campaign-test-run, family-vacation (yeah, right) East Coast bus tour. Because the purported mission of the trip is to help Americans “appreciate the significance of our nation’s historic sites, patriotic events and diverse cultures,” the former half-term Alaska governor did what most tour groups do when they come to the city: she checked out the Freedom Trail, which winds past historic landmarks like the Old North Church and Paul Revere’s house. As she explained on her blog, “There’s so much history here.  It’s amazing how much of our nation’s history can be found in just two and a half miles on the Freedom Trail.” There certainly is a lot of history to be found on the Freedom Trail, but Palin appears to have lost most of it.

…he who warned the British that they weren’t gonna be takin’ away our arms, uh, by ringin’ those bells and, um, makin’ sure as he’s ridin’ his horse through town to send those warning shots and bells that we’re gonna be secure and we were gonna be free. And we we’re gonna be armed.

This is actually the opposite of everything Paul Revere did. He wasn’t sending any messages to the British soldiers who were about to move on the patriots’ weapons stockpiles and arrest key leaders. According to history, Revere was warning the Minutemen that the Brits were coming so these militia members could prepare. He did not ring any bells. He instructed a friend to put either one or two lights in the tower of the Old North Church (“one if by land, two if by sea”). He did not fire any warning shots. His ride at the time was no act of symbolism; it was a stealth operation in support of a local resistance movement whose goals at that point remained largely undefined.

Palin’s Revere narrative is the latest in an emerging, alternative history of the American Revolution as researched by Republican presidential candidates. Rep. Michele Bachmann (R-Minn.) floated her own contrarian theory last month when she told a crowd in New Hampshire that “It’s your state that fired the shot that was heard around the world, you are the state of Lexington and Concord, you started the battle for liberty right here in your backyard.” That mistake—Lexington and Concord are in Massachusetts—would seem a lot more accidental if she hadn’t made it twice—in prepared remarks. (In a related incident, she suggested that the Founding Fathers tried to abolish slavery.) Herman Cain, the former pizza titan who’s currently polling in second in Iowa, recently told Americans to “reread” the Constitution: “When you get to the part about ‘life, liberty and the pursuit of happiness,’ don’t stop there, keep reading.” But if you’re trying to read the Constitution and you come across the phrase “life, liberty, and the pursuit of happiness,’ you should really stop, because you will have been reading the Declaration of Independence.

We don’t mean to nitpick—we just think that if you launch a major publicity tour on the subject of great moments in American history, it might make sense to brush up on the details first. We can only imagine how Palin might try to spin this: “Listen my children and you shall hear, of the midnight ride of Paul Revere. If the story doesn’t sound like what you read on Wikipedia, you know who to blame: the elite liberal media.”