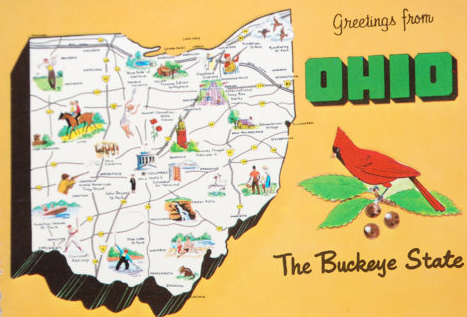 Yesterday I did something I haven’t done in a really long time: went to school. Middle school. My new/temporary landlord/roommate/reporting subject, Erin, teaches outside Columbus, and I joined her for one of the last days of class before school lets out for summer.

Out here, the public schools spend nearly 20 percent less per student than the national average. The lack of resources can be challenging—one local school closed down because its AC broke and the summer heat was too sweltering for the kids. Erin’s school doesn’t even have AC, but she loves loves loves her job. As a writing teacher, she brought me in to talk to her students about what it’s like to be a professional writer. So I spent the day fielding some excellent questions (as well as a couple of racist and homophobic ones) from her seventh and eighth graders. I also heard about their plans for the summer. Lots of them have jobs, mostly with companies or farms owned by their families. Some of those without those types of connections are having more trouble finding work, not totally surprising since job growth in this town is -4.6 percent. As one 14-year-old explained his failure to land summer employment despite having applied at several places, “No jobs to be HAD.”

When Anthony, Erin’s husband, got home last night, he told me he’d spent the day talking about employment as well. Since he and so many of his coworkers at the Ohio Consumers’ Counsel are facing layoffs under Gov. Kasich’s proposed budget cuts, his office had brought in people to talk to them about resources for getting new jobs, like résumé services. Anthony has started searching for alternate work, but hasn’t had any more luck than the 14-year-old yet.

Since Kasich’s budget also targets schools, I asked Erin if she’s concerned that the threat of becoming a single-income household could actually be a threat of becoming a no-income household. Her school recently had to lay off a couple of teachers already, and cut a few more to half-time. But she thinks her position is secure. Ohio is one of the states where teacher seniority is protected by law, a law that teachers’ unions are fighting to defend. So it’s a good thing Erin’s been teaching for eight years. The bad news is that the governor’s trying to cut her union’s power, too.