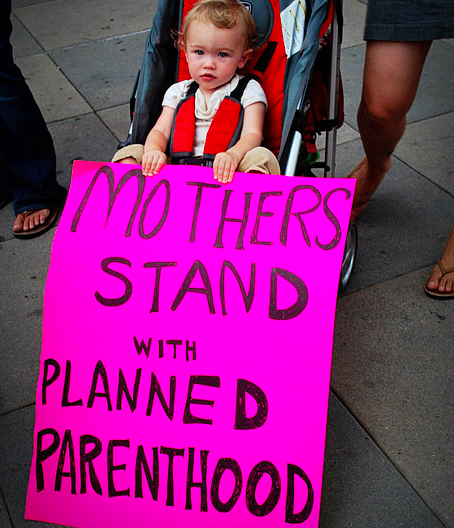 Remember how Congressional Republicans tried to defund Planned Parenthood at the federal level, making a big deal about how they didn’t want tax-payer dollars subsidizing abortions and whatnot? And how Indiana passed a bill cutting all funds for the organization, before the feds stepped in to block them, saying that the measure was discriminatory and illegal. Anyway, with all the Planned Parenthood bashing going on, it’s worth noting that the organization also does a lot of work to help women have babies.

Of course, they’re most well known for services like providing contraception, education, and yes, abortions, to help women (and men!) avoid unwanted pregnancies. But Planned Parenthood’s critics never seem to mention everything that the organization does to help women have healthy babies, like a new program near Salinas, Calif. where PP’s staff is helping farmworkers who want to have children protect themselves from exposure to harmful pesticides.

Jessica Dieseldorff, a nurse practitioner with PP, is leading the pilot education program, which the Bay Citizen recently reported on:

Dieseldorff and her co-workers have identified 40 patients who work in the fields and want to become pregnant in the next year. In addition to the usual advice—stop smoking, limit alcohol consumption and load up on prenatal vitamins—clinic staffers offer common-sense pointers on limiting pesticide exposure: Don’t eat the fruit you harvest before washing it. Wash hands before eating. Wash work clothes separately. Change clothes before getting in your car, entering your home, or hugging your kids.

The US uses billions of pounds of pesticides on fruits, vegetables, and flowers, and the women who work in the fields are exposed more than anyone to these toxic chemicals. And as a recent University of California Berkeley School of Public Health study found, prenatal exposure to some of these pesticides is linked to lower IQ in children and other developmental delays. The study, which focused specifically on children living in Salinas, found that those with the highest levels of prenatal exposure to pesticides scored an average of seven points lower on standardized intelligence tests compared to children that had the lowest exposure levels.

And as the lead researcher points out, this exposure comes at a society-wide cost:

“These associations are substantial, especially when viewing this at a population-wide level,” said study principal investigator Brenda Eskenazi, UC Berkeley professor of epidemiology and of maternal and child health. “That difference could mean, on average, more kids being shifted into the lower end of the spectrum of learning, and more kids needing special services in school.”

Many of the workers that Planned Parenthood is reaching out to are likely immigrants who speak limited English and don’t have access to medical services and advice, so the work to avoid exposure in this population is especially important. It’s also not the kind of PP work you hear its critics citing very often.