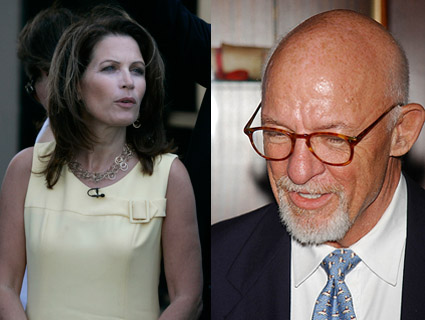 This week, Republican campaign veteran Ed Rollins signed on to run Rep. Michele Bachmann’s presidential operation, ahead of what is expected to be her official declaration later this month in Waterloo, Iowa, the city where she was born. Rollins is a seasoned political consultant who knows conservative GOP politics. He worked on Ronald Reagan’s 1984 re-election bid, and in 2008 he steered Mike Huckabee’s campaign to an upset victory in the Iowa caucus. So it’s significant that Rollins praised Bachmann, a tea party favorite, on Tuesday as a contender who can appeal to the religious right and be “a very strong candidate in Iowa.” But not too long ago, Rollins had a very different appraisal of the Minnesota Republican.

In late January, Rollins appeared on CNN, where he’s been a frequent commentator, to discuss the Republican Party’s response to President Barack Obama’s State of the Union address. After praising Obama’s speech and the GOP’s official rebuttal, given by Rep. Paul Ryan (R-Wis.), Rollins dismissed Bachmann’s poorly produced “tea party response.” In doing so, Rollins questioned Bachmann’s role as a credible Republican leader. Moreover, he suggested Bachmann ought not be representing the Republican Party.

“Michele Bachmann obviously is a member of Congress and a representative of the tea party,” Rollins told CNN viewers. “But at the end of the day, we have to get our serious players out front and talking about the things that matter to be the alternative to the president and Democrats.” In other words, he did not consider Bachmann a “serious” GOP player. (Just this week, Rollins bashed another tea party leader, Sarah Palin, as someone who “has not been serious over the last couple of years.”)

More recently, Rollins dismissed Bachmann’s chances in the 2012 presidential race. In April, weeks after Bachmann revealed her plan to form a presidential exploratory committee, Rollins appeared on MSNBC’s Hardball and offered his two cents about what kind of politician would win the GOP nomination:

At the end of the day, you know, we’re going to have a candidate who has been a governor, I assume. There’s no Washingtonians in this mix. It ain’t going to be Donald Trump. I don’t think it’s going to be Congresswoman Bachmann.

Asked by Mother Jones to explain his recent criticism and dismissal of Bachmann, Rollins quipped in an email, “That was before she hired me! There are great downsides to having been a political analyst with hundreds of appearances over the years. And that is there are quality journalists out there…who pay attention and return to haunt us with our own words.” Rollins went on to say, “My comments regarding the [State of the Union] rebuttal wasn’t meant that she wasn’t serious, it [was] just she wasn’t part of the leadership or a committee chairman and for that reason the mainstream media wasn’t going to carry her message.” That’s not bad spin, but clearly at the time Rollins was characterizing Bachmann as a marginal figure in the Republican Party.

In his email, Rollins added, “Not being part of the establishment and DC crowd could now be a great advantage” for Bachmann. As for his claim that Bachmann (like Trump) couldn’t win the GOP nomination, Rollins said he’d changed his mind because the Minnesota Republican “now has a campaign team and a more open field.”

Even so, Rollins clearly understands at least one of Bachmann’s weaknesses. In an interview after announcing his job with Bachmann, Rollins acknowledged her track record of making controversial (some would say untrue) statements. (As Bill Adair, the editor of the fact-checking site PolitiFact, recently said, “We have checked her 13 times, and [found] seven of her claims to be false and six have been found to be ridiculously false.” Adair noted that Bachmann is “unusual” among politicians in that “she has never gotten a rating higher than false.” ) But Rollins said there was no need to worry about Bachmann on the presidential campaign trail; he would “have a good team around her and we’ll basically make sure that everything is 100 percent fact-checked.” But Rollins’ past remarks about Bachmann raise another question: Who will be vetting the campaign manager?