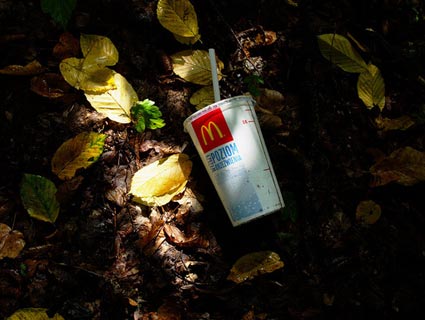 If Iron Eyes Cody (the “crying Indian” of the ’70s anti-littering commercials) were alive today, he would almost certainly shed a few tears about this news: Litter from fast-food chains is spreading far and wide. When a team from the environmental nonprofit Clean Water Action surveyed litter in four cities in the San Francisco Bay Area, it found that trash from four restaurants (McDonald’s, Burger King, Wendy’s, and Starbucks) and one convenience store (7-11) made up more than half of the litter it collected.

Miriam Gordon, Clean Water Action’s California director, was careful to note that the survey was “not comprehensive; it was just a snapshot of trash in four communities.” But its implications are big, since McNuggets boxes and Big Gulp cups dropped in the Bay Area often find their final resting place in the Great Pacific Garbage Patch, the giant gyre of trash that floats in North Central Pacific, between California and Hawaii. According to Gordon, 80 percent of the patch’s trash comes from land-based sources. And it’s growing: In 1999, a researcher who surveyed the patch found six times more plastic than plankton. By 2009, there was 40 times more plastic than plankton.

Some communities are wising up to the litter problem. Several cities in California and a few in DC’s Potomac Basin are aiming to get rid of litter before it enters creeks and storm drains by installing trash capture devices in the storm drains and ramping up litter collection. But “this will be costly from a taxpayer perspective, ” says Gordon. “The real environmental solutions come from reducing trash at the source.” Clean Water Action estimates that as much as 31 percent of the trash it collected could have been eliminated if restaurants allowed customers to bring in reusable food and drink containers.

Easier said than done. I asked McDonald’s whether it allows customers to bring in reusable food and beverage containers. No dice. “[A customer’s container] could introduce a risk of cross-contamination by accepting items back across the counter and it being in contact with our kitchen equipment and employees,” wrote Jill Scandridge, McDonalds’ director of public affairs, in an email. “There is no way to ensure that it meets necessary sanitation standards for being in contact with food.”

Fair enough. It’s understandable that McDonald’s would want to be extra careful; no one wants a salmonella outbreak. But some of the other chains I talked to do allow reusables: Some 7-11 stores sell reusable cups for “proprietary beverages” like the Big Gulp. Starbucks has allowed its customers to bring their own cups since 1985, and in 2000, a company task force estimated that it could save $1 million a year by encouraging customers to bring in reusable mugs. The coffee giant recently pledged to serve its 25 percent of its beverages in renewable cups by 2015.

When I asked San Francisco’s health department whether it considers reusable containers a health risk, the answer was no. “Currently, there is no official state or local public health policy on bringing reusable food containers into restaurants,” wrote Richard Lee, director of San Francisco’s environmental health regulatory programs, in an email. “In general, we don’t think this would be a likely public health hazard, because it is unlikely that members of the public would put themselves at risk using dirty or contaminated containers.” Restaurants can take precautions to reduce the chances of contamination; for example, Lee notes that SF health-department codes specify that reusable cups should not touch the beverage-dispensing spigot.

Clearly a switch to reusables at fast-food joints like McDonald’s would require a pretty dramatic shift in consumer behavior. And I’m not suggesting that everyone bring old Tupperwares to tote their Big Macs. But it would be nice if more fast food chains encouraged people to BYO cups for soda or coffee. McDonald’s serves more than 58 million customers every day. That’s a lot of cups, lids, and straws that the ocean could probably do without.