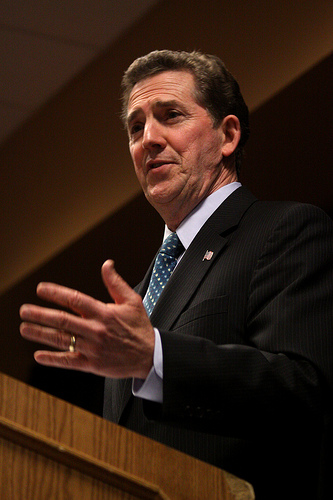 Conservatives are apparently so turned off by the current crop of GOP presidential candidates that they’re urging Sen. Jim DeMint (R-S.C.), the right-wing king of the Senate, to launch a presidential bid, the Hill reports. Here’s the kicker: DeMint says he’s considering it.

The Tea Party favorite, who had indicated he was not going to run in 2012, would significantly shake up the race if he were to jump in.

The second-term senator would have the inside track to win South Carolina, a key early state in the nomination process. Since 1980, every Republican who has triumphed in the Palmetto State has gone on to capture the GOP presidential nomination.

Now, DeMint—like Rep. Paul Ryan (R-Wisc.), New Jersey Gov. Chris Christie, and all the other GOPers who are being urged to run—insisted that right now he has no intentions of declaring his candidacy. But it’s clear the growing push to draft him into the race, coming from a top GOP operative and a DeMint grassroots network, Conservatives4DeMint, has DeMint at least considering his options.

A DeMint 2012 campaign would be a huge hit with tea partiers and social conservatives—the South Carolina lawmaker’s most feverish supporters. And, looking at his legislative record, it’s little wonder why. A hard-line Christian conservative, he’s said that schools should fire gay teachers and unmarried female teachers with live-in boyfriends. DeMint’s own health care reform plan was little more than a simple federal voucher plan, in which the government would give $2,000 to individuals and $5,000 to families to buy their own health care. That’s it. And DeMint’s plan would be funded by returned TARP bailout money, so that, he said, the plan wouldn’t add to the deficit. (Except that TARP had already been added into the deficit months before.) How exactly DeMint’s plan would lower costs or improve the quality of care or even work at all, no one knows.

For what’s it worth, DeMint has also compared America under President Obama to “about where Germany was before World War II” and called the stimulus package—which added (PDF) 2.7 million jobs to payrolls and boosted the national GDP by 3.4 percent—a “mugging” and a “fraud.” At the least, a DeMint candidacy would liven up the GOP field, which, with long-shot Herman Cain rising in the polls, needs all the help it can get.