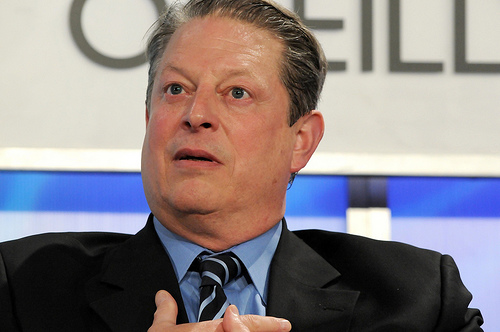 Al Gore has a lengthy piece in the forthcoming issue of Rolling Stone on—what else?—climate change. He starts out with some harsh (and deserved) words about the media’s overall coverage of the issue. But his toughest criticism is reserved for President Obama, whom he says “has thus far failed to use the bully pulpit to make the case for bold action on climate change.”

In the congressional debates on the subject, allies “felt abandoned when the president made concessions to oil and coal companies without asking for anything in return”—like his plan to dramatically increase offshore drilling. Moreover, though, Obama has not used his position to advocate for dealing with the problem, Gore writes:

Yet without presidential leadership that focuses intensely on making the public aware of the reality we face, nothing will change. The real power of any president, as Richard Neustadt wrote, is “the power to persuade.” Yet President Obama has never presented to the American people the magnitude of the climate crisis. He has simply not made the case for action. He has not defended the science against the ongoing, withering and dishonest attacks. Nor has he provided a presidential venue for the scientific community — including our own National Academy — to bring the reality of the science before the public.

Here is the core of it: we are destroying the climate balance that is essential to the survival of our civilization. This is not a distant or abstract threat; it is happening now. The United States is the only nation that can rally a global effort to save our future. And the president is the only person who can rally the United States.

Of course, the administration would argue that it’s been quite vocal about the kind of policies that would address the climate crisis—fuel efficiency standards for automobiles, a national clean energy standard, and investments in green jobs. Not a week goes by that I don’t get a press release from the administration about Obama or another administration official touring a clean tech manufacturing facility or something similarly photo-opportune. But you never hear about how the status quo is dangerous when it comes to climate change, and the implications are catastrophic and irreversible.

I realize that a fleet of pollsters and messaging gurus have decided that the American public wants to hear positive messages about jobs and economic opportunity, not scary warnings about how we’re destroying the planet. But like Gore, I’ve always thought that there is a missed opportunity in not presenting the counterargument to the contention that truly addressing climate change will be economically catastrophic. It’s not just that there are also opportunities in investing in alternatives (and I think there are). It’s that not doing so has very, very bad consequences—ones that most Americans don’t fully appreciate yet. It’s here that Obama’s message has been lacking.