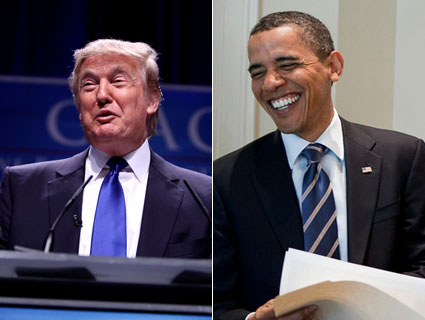 Strategic derision is a much underutilized force in politics. But on Saturday night, Washington and the rest of the nation saw perhaps its finest use in decades. The purveyor: President Barack Obama. The target: celebrity billionaire Donald Trump.

In what was the most prominent public mugging in recent years, Obama, speaking at the White House Correspondents’ Association dinner (A.K.A. Washington’s prom), obliterated Trump with sarcasm. The president’s speech, which played off the Trumped-up birtherism conspiracy-mongering, was preceded by a White House-made video that showed Obama’s recently released long-form birth certificate pulsating to the power-beat of Rick Derringers’ “I Am a Real American,” which was once wrestler Hulk Hogan’s theme song. (This was an inspired choice, given that Trump recently purchased a piece of World Wrestling Entertainment.) During his laugh-riot remarks—it’s a tradition for the president to serve up roast-like gags at this annual black-tie affair—Obama poked at various media outlets, possible GOP rivals in 2012, Matt Damon, and Vice President Joe Biden. But it was Trump that comprised the essence of his bit.

In case “there are any lingering questions,” Obama showed his “birth video”—which turned out to be a clip from Disney’s animated The Lion King depicting the birth of Simba the lion cub (in Africa!). He made other birther-related jokes, at Trump’s expense. Yet Obama went further. He kidded Trump for having fired Gary Busey on Celebrity Apprentice after the men’s team did not perform well cooking steaks in a steakhouse. “These are the kind of decisions that would keep me up at night,” Obama quipped. “Well-handled, sir. Well-handled.” With this joke, Obama dismissed Trump not just as a birther fool, but as a lightweight blowhard. (Speaking of big decisions, about 24 hours later, Obama would announce that he had signed the orders for a US special operations raid into Pakistan that ended up killing Osama bin Laden.)

Obama’s Trump routine worked on a number of levels. It was a clear message from Obama to Trump: You want to take me on? In a flash, I can demonstrate I have ten times the class and intelligence you possess. And it was as if a high school bully had been taken down in front of the entire school. In fact, within the cavernous Washington Hilton ballroom, the moment was cathartic. After weeks of Trump’s nonsense—which did seem absurd to many within the media who, nevertheless, felt compelled to cover it—finally someone was declaring this episode a total nothing-burger. The audience howled at Obama’s comedic punches not just because they were funny; this was an act of purging. Here was a much-needed tonic for Trump’s swill.

As Trump, a guest at the dinner of The Washington Post, continued to sit stone-faced, Saturday Night Live‘s head writer Seth Meyers, who headlined the dinner, kept up the fusillade. His bravura performance—one of the best in recent years—zinged many political and media figures, including the president. But the bull’s-eye was Trump. Meyers noted that Trump is considering running for president as a Republican, “which is surprising because I just assumed he was running as a joke.” That crack drew one of the largest laughs of the night. Then he moved on to the hair. Then to the Miss USA pageant. Then to Trump’s accent. Then to his claim he has a great relationship “with the blacks.” As everyone around Trump guffawed, Trump sat in his seat without cracking a smile—or any expression. He looked like a hood ornament. It was as if Meyers was dancing on a (fresh) grave—much to the amusement of most people in the room.

Meyers’ bit bolstered Obama’s. The evening left Trump radioactive rubble. It was like a modern-day version of Shirley Jackson’s short story, The Lottery, and Trump had drawn the unlucky number—except that he deserved this rhetorical stoning. At least for the moment, it seemed as if Trump’s stock had crashed, with him moving from the category of off-beat political celebrity to object of mockery.

Was lasting damage done? This guy has risen from past blows. But any Trump presidential campaign will be even harder to take seriously after this. And if Celebrity Apprentice returns next year, the developer and the show’s producers might have to move from B-list to C-list targets. The Trump brand was already tainted by Trump’s own actions, including last week’s post-long-form pivot from pushing birtherism to hinting Obama only attained spots at Columbia and Harvard law because of the color of his skin. Yet Obama, with an assist from Meyers, had turned this tainted wannabe-pol into a figure of comic contempt.

This shows the value of strategic derision. When the Obama White House in the fall of 2009 was tying itself into knots about how to respond to Fox News, ultimately—though temporarily—deciding to mount a full campaign against the right-wing network and declare it illegitimate, I noted
that a better tactic might be to ditch the heavy-handed outrage and opt for “good-natured belittling… That is, don’t demolish Fox, demean it.” Ultimately, the White House dropped its anti-Fox campaign. But Obama’s chuckle-driven smackdown of Trump shows how effective humor-laced demeaning can be. Trump was put in his place not by indignation but by wit. It would be premature to write off Trump’s latest reality show. But the evening was proof that a smile can be mightier than scorn—and that sometimes it’s best to fight a joke with a joke.