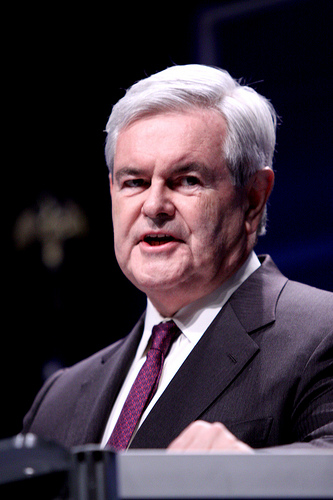 Newt Gingrich, former House speaker turned Fox commentator and GOP figurehead, is expected to officially unveil his 2012 presidential campaign today. (On Facebook and Twitter, no less.) But unlike fellow GOP presidential hopefuls Mitt Romney or Tim Pawlenty, who are putting together campaign strategies that emphasize a few key early states, Gingrich is going all-out in as many states as possible.

As Politico reports today, Gingrich is building a campaign that will spread money and manpower across the crucial early primary states in an attempt to woo Republican voters of all stripes:

That likely means participating in this summer’s Iowa GOP straw poll in Ames, traditional retail politicking in New Hampshire and making an all-out effort in South Carolina. But Gingrich officials say their effort will be bigger than any one state and look dramatically different than any other campaign.

Because the wealthy Mitt Romney and Jon Huntsman have the capacity to spend their own millions on the campaign and remain on the airwaves even after sustaining early losses, advisers to the former House speaker don’t believe it’s possible to lock up the nomination by winning one or even two of the initial contests. So Gingrich isn’t pinning his hopes on any single state, believing instead that, for those who can’t fund their own campaigns, the drawn-out contest will require a prudent use of resources spread across the board.

“You’ve got to compete everywhere and appeal to Republican primary voters across the board—you can’t cherry-pick places you think you can win,” said Dave Carney, a New Hampshire-based Gingrich strategist and longtime GOP consultant, predicting a “long, hard-fought battle,” thanks to the prospective self-funders.”

There are a few reasons why Gingrich could pull this off. He’s got money—lots of it. In its first four years, his group American Solutions for Winning the Future raised a whopping $52 million, and last fall he outpaced the other 2012 GOP hopefuls in raking in cash for his political advocacy groups. He’s also got name recognition. His years in Congress, his commentary on Fox News, and his onslaught of conservative books and films means he’s a household name among Republican voters from California to New Hampshire.

Yet so far, the money and fame haven’t translated into much popular support for Newt, at least in the polls. In a recent Public Policy Polling survey, Gingrich trailed frontrunners Mitt Romney and Mike Huckabee by five and six percentage points, respectively. And in a recent New York Times/CBS News poll conducted in April, 37 percent of respondents said they had an unfavorable view of Gingrich, while only 23 percent had a favorable one. The only two GOPers disliked more than Newt according to the Times? Sarah Palin and Donald Trump.