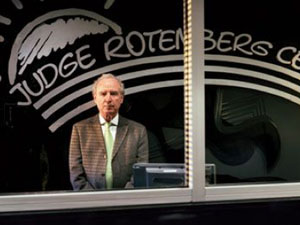 A few years ago, Mother Jones published Jennifer Gonnerman’s year-long investigation of the Judge Rotenberg Center (JRC), a Massachusetts private school for special needs kids that uses painful electric shocks for discipline. Despite the story’s impact, and despite several state and federal investigations, the school remains open. Currently the school receives state funds to educate and care for children with a wide range of conditions. Some are severely autistic or schizophrenic, while others are simply troubled teens whose rebellious behavior was too much for the public school system to handle. But regardless of their mental or physical capacities, the school has a one-size-fits-all treatment for about half of its students: electric shocks.

JRC has weathered attacks for 40 years, but there are signs that the wind may be changing: Earlier this month, school founder and executive director Matthew Israel announced he is stepping down as of June 1. In a statement, Israel said, “I am now almost 78 years old, and it is time for me to move over and let others take the reins.” Israel will reportedly be moving to California to join his wife, Judy Weber, who runs a special needs school called Tobinworld. In his official statement, Israel made no mentions of the recent charges plaguing the school, but it’s been discovered that his resignation is part of a plea bargain to spare himself jail time.

As the Boston Herald reports, Israel agreed to resign and to undergo “five years of pre-trial probation to settle charges accusing him of interfering with an investigation…” The investigation in question is a 2007 incident in which someone pretending to be a JRC supervisor prank-called the school and ordered administrators to shock two special needs teens. The administrators gave one teen 29 shocks, and the other 77. And though the school will tell you the shocks feel like a bee sting, Gonnerman says it feels more like a swarm of wasps attacking.

There is 24/7 video surveillance of all students and staff, so these actions should have been easily preserved as evidence. However, Massachusetts attorney general Martha Coakley indicted Israel on charges that he ordered staff to destroy video footage of the incident. “Dr. Israel then attempted to destroy evidence of the events and mislead investigators, and that conduct led to his indictments today,” she told the Guardian. “Today’s action removes Dr. Israel from the school and should ensure better protection for students in the future.”

By agreeing to leave the school, Israel was able to avoid incarceration, but his departure doesn’t necessarily mean that things at the school will change immediately. As part of the deal, there will be additional checks in place to make sure incidents similar to the 2007 event don’t recur, but the shock devices will still be allowed. JRC is currently looking for a replacement for Israel. Until then, his longtime, trusted, second-in-command Glenda Crookes will run the school. Hope she’s up to the task: even though Israel’s gone, the Department of Justice still has an open investigation of the school for violations of the Americans With Disabilities Act.