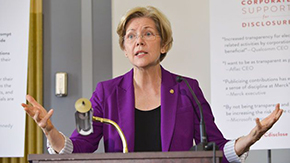 On her first day running the new Consumer Financial Protection Bureau (CFPB), Elizabeth Warren met with a group of bankers from her home state, Oklahoma. Going into that meeting, Roger Beverage, president of the Oklahoma Bankers Association, feared the havoc Warren, who had developed a reputation as a fierce consumer champion, would soon wreak upon his state’s banks. He and his colleagues in the banking industry, he recalls, “had this vision that she was akin to the Antichrist.”

Today, Beverage considers himself a Warren convert. He openly praises Warren—who was appointed by the White House to get the bureau up and running but has not been nominated to head it—saying she is “far and away” the most qualified person to become the bureau’s permanent director. “Ms. Warren has demonstrated that she is willing to work as hard as possible for the benefit of consumers, consumers’ families, and community banks,” Beverage says. “She would be an outstanding director, and I have encouraged both of our US senators to look past political rhetoric and look at what the woman has done.”

Beverage’s reversal reflects a noticeable thaw in relations between Warren and parts of the banking industry. This week, Camden Fine, president and CEO of the influential Independent Community Bankers Association, told a gathering of 1,000 bankers that the odds Obama would nominate Warren were “better than even,” later remarking to American Banker that “you would have to look favorably on a [Warren] nomination because clearly she understands our model.” Frank Keating, the head of the American Bankers Association, told a reporter that the ABA would support Warren if she were confirmed as CFPB director by the Senate. And Robert Palmer, who heads the Community Bankers Association of Ohio, captured the mood of small banks when he told Bloomberg Businessweek that if Warren “leaves, and the direction changes, we’re not going to be very receptive.”

While Warren’s nomination was too-toxic-to-touch mere months ago, the momentum of the past few weeks could be enough to convince the White House to tap her for the job. Whomever Obama picks, he’ll need to do it soon: The deadline for having a permanent CFPB director in place is July 21, according to the Dodd-Frank financial reform law. But no matter who the nominee is, he or she faces massive opposition in Congress, with Republicans maneuvering to block not just Warren but any CFPB nominee if their demands to weaken the bureau are not met.

The warming to Warren is due, in large part, to a months-long outreach campaign aimed at members of the banking industry. According to calendars posted on the CFPB’s website, Warren’s schedule has included 150 appointments with industry officials since her first day in September—phone calls, in-person meetings, industry conference speeches, even visits to local bank branches. She’s spoken with everyone from Bank of America CEO Brian Moynihan to the head of the American Bankers Association to community bankers in states from Maine to Texas.

The charm offensive appears to be paying off—and at precisely the right time.

Michael Grant, president of the National Bankers Association, which represents more than 100 minority- and women-owned banks throughout the country, is another fan. He met with Warren in February and says he would support her as the nominee to run the CFPB because of her “genuine concern for protecting the rights for consumers and for her appreciation of the role banks play in the financial infrastructure of this country.” Grant adds, “She’s a win-win both for our industry and for the consumer if she is nominated and made permanent chief.”

Paul Hickman, president and CEO of the Arizona Bankers Association, says he, too, came away impressed after he and a group of Arizona bankers and business leaders met with Warren in Washington. A former staffer for Sen. John McCain (R-Ariz.), Hickman says Warren went a long way toward allaying the industry’s fears of a consumer bureau run amok that would slap banks with new regulations and bury them in paperwork. “I thought Elizabeth Warren did a really good job of letting the members of that meeting know, and the business people of Arizona know, that her mission was not to somehow suppress community banks,” Hickman recalls.

But for some state banking chiefs, Warren’s outreach has changed their mind about her but not about the CFPB itself. George Beattie, president and CEO of the Nebraska Bankers Association, told Mother Jones last fall that, in his view, Warren simply didn’t understand community banks. Today, he’s more positive about Warren, noting her “better appreciation for what banks in this country do for their communities.” He worries more about having a single director run the CFPB, whether that’s Warren or not. Beattie says he’d prefer a panel of directors run the bureau, like the Securities and Exchange Commission, though he ultimately thinks the bureau should be scrapped altogether. “The congress has created an exceedingly strong governmental agency with little oversight,” he says. “I think that’s a bad thing for this country regardless of who runs it.”

House Republicans agree with Beattie. On Thursday, a House financial services subcommittee passed a trio of bills that would replace the single director with a bipartisan five-person commission, give a separate council of financial regulators veto power on new regulations by the bureau, and restrict the CFPB’s power until the Senate confirms Obama’s nominee to be director. So, too, do Senate Republicans. Earlier this week, they sent a letter to Obama saying they’d oppose any CFPB nominee until the bureau’s power was scaled back.

To be sure, huge hurdles remain between Warren and the nomination. Republicans in Congress almost universally oppose her nomination. (She has, however, earned tepid praise in the past from Senate GOPers including Chuck Grassley of Iowa and Bob Corker of Tennessee.) At this point, Senate GOPers appear to willing to do anything to undermine the CFPB and prevent a strong consumer advocate like Warren from becoming its director, and it’s becoming increasingly difficult to see how GOPers’ demands will be met and a nominee confirmed before the July deadline. And of course on Wall Street, she has no shortage of enemies among the nation’s largest banks.

But even if Warren only wins over some bankers and not others, leaving the industry conflicted on her nomination, that could actually be a victory. “There was universal opposition to Dodd-Frank,” says a person who’s worked closely with Warren in the past. “There was universal opposition to Warren getting the bureau started. At the end of the day, if the banking industry is fractured on her nomination, that’s just fine.”