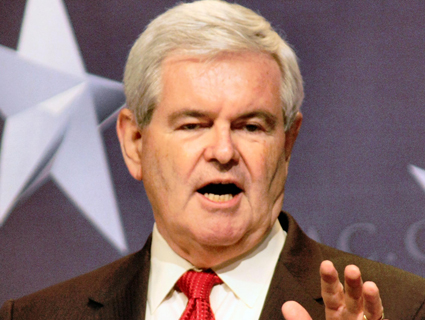 Update: Gingrich spoke at the event on Tuesday as scheduled and, it’s safe to say, things didn’t quite go as planned. Full update, with video, below the jump.

GOP presidential candidate Newt Gingrich has drawn tons of bad press in the past two days for criticizing GOP Rep. Paul Ryan’s plan to end Medicare, for charging that President Obama is the “most successful food stamp president in history,” and for his bulging debt ceiling at the jewelry store Tiffany’s. What’s gone overlooked are the former Speaker’s Tuesday night plans. This evening, Gingrich and fellow presidential aspirant Rep. Michele Bachmann (R-Minn.) will headline a Minneapolis fundraiser for the Minnesota Family Council (MFC), a Twin Cities-based conservative Christian organization that’s bankrolling the effort to ban gay marriage in the state, and whose president has written that gay teens who commit suicide brought it upon themselves.

In a statement posted on the group’s website, Gingrich writes that the group “is vigorously defending our God-given freedom in our communities, schools, at the Capitol and the ballot box. Join me and Congresswoman Michele Bachmann in rediscovering God and the vital role of faith and family in our American freedoms.” The $100-per-plate event will also include a screening of the ex-Speaker’s documentary, Rediscovering God in America, and a book signing.

One of the group’s leaders has suggested that anti-gay organizations should be proud to be labeled “hate groups.” In an interview last December with Peter LaBarbera of the anti-gay group Americans for Truth About Homosexuality, MFC research analyst Barb Anderson urged him to embrace the fact that the Southern Poverty Law Center had designated his outfit a “hate group.” “I think it’s becoming perhaps a badge of honor to be called a hate group,” she said. Anderson went on to describe the “radical homosexual agenda” as “the greatest threat to our freedom and to the health and well being of our children.” Last fall, the SPLC added a handful of anti-gay groups to its list of hate groups, including the Family Research Council, which joined such outfits as the Church of the National Knights of the Ku Klux Klan and the Council of Conservative Citizens. That prompted Republican members of Congress, including Bachmann and then-Minority Leader John Boehner (R-Ohio), to sign onto an open letter declaring their support for the FRC.

But MFC’s most chilling comments concern the recent surge in suicides by LGBT teens.

MFC president Tom Prichard argued in a post on the group’s blog that the recent spate of suicides by gay teen were tragic, but also the natural consequence of an unhealthy and immoral lifestyle decision. His post came after the death of Justin Aaberg, an openly gay 15-year-old from the suburban Twin Cities area who hanged himself last summer—one of three gay teens at his high school to commit suicide in the past year. Aaberg’s death was unfortunate, Prichard said, but was being manipulated by the all-powerful gay lobby.

“Youth who embrace homosexuality are at greater risk [of suicide], because they’ve embraced an unhealthy sexual identity and lifestyle,” Prichard wrote. “These alternative sexual identifications or lifestyles deny the reality that we are created male and female. To live or try to live in conflict with how we are made will invariably cause problems, e.g. emotional, psychological and social. Denying or fighting against this reality is the reason alternative forms of sexual expression, whether homosexual or heterosexual, will put people at greater risk [of suicide].”

Prichard—who also alleged that the brutal murder of Matthew Sheperd, who was gay, in Laramie, Wyoming, was not a hate crime—conceded that he would likely be “accused of being accused of being unloving, unhateful, etc.” for his efforts to save the gay community.

Another MFC-linked group, the Parents Action League (which is headed by MFC researcher Barb Anderson), is involved in the ex-gay movement. According to the Minnesota Independent, the PAL has lobbied for schools to celebrate the Day of Truth, celebrating efforts to turn gay people straight through prayer. Minnesota Family Council, meanwhile, promotes the work of ex-gay ministries like Exodus International and Healing for the Soul on its webiste. As Right Wing Watch has noted, the MFC has deep connections to social conservative leading lights, including David Barton, the Texas pseudo-historian whom Bachmann invited to teach Congress about the Constitution.

Although they play two distinct roles within the Republican party—Gingrich the elder statesman, Bachmann the rogue insurgent—the two presidential aspirants have a shared history of anti-gay rhetoric. Gingrich has alleged that the United States is under assault from a “gay and secular fascism,” and last year poured $150,000 from his political action committees into the effort to defeat Iowa Supreme Court judges who overturned the state’s gay marriage ban. Bachmann has called homosexuality a “sexual dysfunction,” and as I reported today, formed an unlikely alliance with Bradlee Dean, a death-metal evangelist who believes that gays caused the Holocaust.

In that sense, MFC is a natural ally. As Minneapolis City Pages has reported, the group has a stated goal of raising $4.7 million to push through an amendment to the state constitution banning gay marriage. The proposed amendment, which has launched a predictably heated battle in the state legislature, is part of a renewed push by social conservatives, even as recent polls show a majority of Americans support gay marriage (the number grows even larger if you include support for civil unions). Despite—or perhaps because of—his dodgy personal history, which includes two divorces and numerous reports of infidelity, Gingrich has sought to revitalize his image as a culture warrior in recent years. In March, he appeared onstage with the Rev. John Hagee at his San Antonio church.

In addition to gays, Gingrich has also said that the nation is under assault from Muslims, atheists, socialists, Kenyan anti-colonialists, and the ACLU. Neither Bachmann nor Gingrich have replied to a request for a comment; we’ll update this post if they do.

Update: The AP reports that, during the book-signing portion of the event, Gingrich was confronted by progressive activist Nick Espinosa, who took issue with the candidate’s support for the MFC. After initially giving him a book to sign, Espinosa shouted “Feel the rainbow, Newt! Stop the hate! Stop anti-gay politics!” and poured a box of glitter on the candidate. Here’s the video: