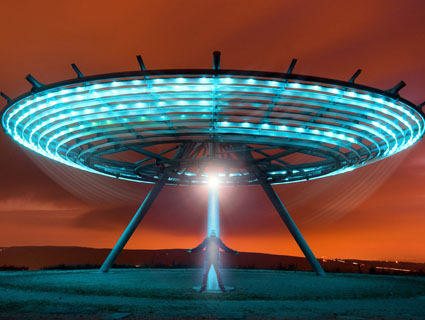 Area 51, Annie Jacobsen’s new exposé of the military’s so-secret-it-doesn’t-exist base in the Nevada desert, is a very odd book. On the one hand, much of it is a sane, grounded history of the installation’s key role in Cold War nuclear testing and spy-plane R&D, full of previously undisclosed information based on declassified records and dozens of interviews with people who worked there. It’s a refreshing antidote to the popular idea, promoted by ufologists and screenwriters, that Area 51 is part of a massive cover-up involving alien autopsies and the reverse engineering of interstellar spacecraft. Those associations are understandable, Jacobsen explains: Area 51 launched its fair share of unidentified flying objects over the years; after all, it was in the business of developing flying objects no one (especially the Soviets) could identify.

Jacobsen sticks to that sensible course for about 90 percent of the book. But the other 10 percent—the parts that are already getting attention in places like NPR’s Fresh Air and The Daily Show—are kind of, well, nuts. Things get weird when she links Area 51 to the Roswell incident, the legendary crash of some kind of flying object in New Mexico in the summer of 1947. Jacobsen says the remains and debris from the crash were eventually brought to Area 51, where they were studied by one of her sources.

Based on this single, unidentified source, she spins a truly amazing tale of what really happened in Roswell. The crash didn’t involve a weather balloon, as the Air Force insisted, or a UFO. Rather, it was a super-duper-hi-tech remote-control stealth Soviet flying saucer developed at Stalin’s behest, designed by a couple of ex-Luftwaffe aeronautical-whiz brothers, and manned by “child-size aviators.” These diminutive fliers appeared to be 13 years old and had oversized heads and “haunting, oversize eyes.” But they weren’t little gray men; they were “biologically and/or surgically reengineered children” created by…fugitive Nazi doctor Josef Mengele! The crash, reasons Jacobsen, was staged as part of a Kremlin plot to send Americans into a fit of UFO-induced hysteria.

This theory has so many layers of improbability that it’s hard to know where to begin. How did the Soviets get this flying disc into American airspace, much less over the Southwest? Why did they never use this type of stealthy, hovering aircraft again? How did Mengele go from being at Auschwitz to making mutants unlike anything ever seen before or since, all in the space of two years? And why did Stalin then let him head off to South America to live out his days in obscurity? Jacobsen does not try to seriously address any of these obvious questions.

The entire story is based on the word of one anonymous source who worked as a contractor at Area 51. Jacobsen insists he should be believed because all the verifiable information he told her proved to be true. That’s pretty shaky logic, especially when you’re repeating a tale that should be setting off your BS detector. When Jacobsen asks him for more details, he tells her, “You don’t have a need-to-know.” Elsewhere in the book, she pushes back against this kind of security-state stonewalling, but here, she accepts it as proof that she’s being told the truth.

This type of thinly-sourced, credulous reporting wouldn’t pass muster at most newspapers. No doubt it wouldn’t fly at the Los Angeles Times, where Jacobsen works as a contributing editor to its magazine. Standards are clearly different in the book world, where an author telling such a tale can confidently claim on the jacket, “This book is a work of nonfiction. The stories I tell in this narrative are real.” Well, except for the ones that can’t be proved.

Before Area 51, Jacobsen was best known for a story she wrote in 2004, a first-person account of being on a domestic flight with a group of Middle Eastern men whom she thought were behaving suspiciously. Thinking they were potential terrorists engaged in a “dry run,” she freaked out. Federal air marshals detained the men—a band of Syrian musicians—and let them go without finding anything unusual. But Jacobsen is still sticking by her overhyped version of events. As Kevin Drum wrote at the time, “Her memory of her panic will keep her convinced that she was right no matter what the evidence says, and there will be plenty of people out there to egg her on.”

Ironically, the distorting power of fear is central to Area 51. Jacobsen’s Roswell theory is rooted in the idea that the Soviets thought the American public would accept a UFO hoax as truth, distracting them from real threats and undermining their faith in the government. That didn’t happen, though Americans would eventually discover Roswell and come to mistrust the government on their own. Yet in trying to convince us not to buy into the subversive attractions of alien-government conspiracy theories, Jacobsen has talked herself into believing a theory that’s just as absurd. Was she afraid to disappoint a source? Did she think her book wouldn’t sell without a sensational scoop? Or did she simply, to parahprase Fox Mulder’s favorite poster, want to believe?