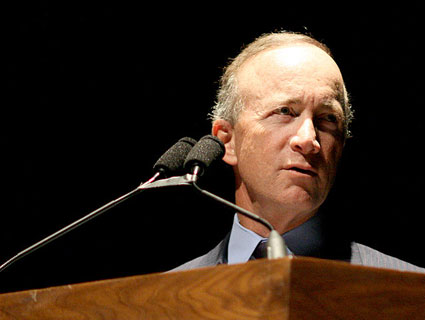 Election watchers looking for something to monitor this week might want to keep an eye on Indiana, where lawmakers are deciding the fate of a bill that would cut funding for Planned Parenthood in the state and dramatically limit abortion access. Mitch Daniels, the Hoosier state’s governor and a potential GOP presidential contender, has called for a truce on social issues in favor of a focus on budget matters. How Daniels handles this truce-breaking legislation will be an important test of how seriously he takes his call for peace.

On Tuesday afternoon, Republicans in the Indiana House filed a motion to concur with the Senate’s version of the bill, paving the way for a vote as early as Wednesday. Unlike the House measure, the Senate bill includes language that blocks Medicaid dollars from going to the state’s 28 Planned Parenthood clinics, which currently receive $3 million in public funds for reproductive health programs. If the proposal becomes law, Indiana will be the first state in the country to use this tactic to target Planned Parenthood. The move comes amid Republican attempts to defund the organization at the federal level.

The measure has implications beyond one organization, however, because federal law generally prevents states from deciding which family planning services Medicaid patients can use. That means that Indiana could forfeit all $4 million it receives in federal family planning funding, Family and Social Services Administration Secretary Michael Gargano told the Associated Press. That would leave 22,000 low-income residents without access to family planning services according to Betty Cockrum, executive director of Planned Parenthood Indiana. The bill has been filed as an “emergency” measure, meaning its provisions go into effect immediately.

While the Planned Parenthood “cut” appears to save money, it could actually end up costing the state. Indiana’s Family and Social Services Administration says that more than half the births in Indiana are paid for by Medicaid, and that percentage is almost certain to increase if thousands of women lose access to contraceptives.

Even if Daniels can prevail upon his allies in the legislature to remove the Planned Parenthood language, it’s just one of a number of anti-abortion and reproductive rights measures in the bill. The proposal also includes a ban on abortions after 20 weeks, claiming a state interest in preventing pain to the fetus. Another provision requires that doctors tell women that abortion may cause breast cancer, infertility, or pain to the fetus—all medically dubious claims—and requires an 18-hour waiting period before a woman can have an abortion. The bill also states that “human physical life begins when a human ovum is fertilized by a human sperm.”

Daniels, an abortion opponent, has argued that the Republican Party should drop the culture wars for the time being in favor of focusing on the economy. While the provisions in this bill would seem to break that truce, most observers expect he’ll approve it anyway. “The political climate in Indiana these days would suggest that he would sign it,” Cockrum tells Mother Jones. She said her group is working with lawyers to determine its legal options if the bill becomes law.

At the very least, Daniels’ critics are anticipating some fun watching how the likely 2012 contender will handle the situation. “Those of us who watch this stuff will enjoy seeing how much he squirms,” says John Schorg, director of media relations for the Indiana House Democratic Caucus. “These are the kind of decisions that tend to be remembered when someone decides to run for president.”