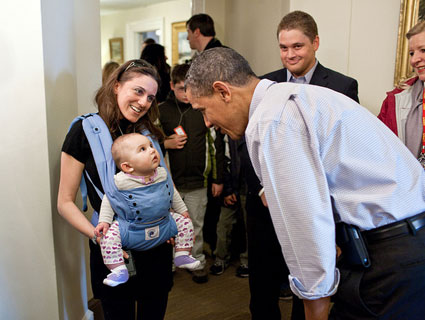 This morning, in an attempt to end, once-and-for-all, the right-wing conspiracy that he is not eligible for office, President Barack Obama released his long-form birth certificate from the state of Hawaii. “The President believed the distraction over his birth certificate wasn’t good for the country,” the White House said in a statement.

But those distractions won’t be going away anytime soon. I just got off the phone with Texas GOP State Rep. Leo Berman, sponsor of his state’s birther bill, and a vocal proponent of the idea that the President was not born in this country. Berman, who has explained previously that he gets much of his news via “YouTubes,” was not aware of the White House’s release when I called him up, but his initial reaction more or less set the tone: “I wonder why it took them almost two years to release that? That seems kind of strange.”

I sent Berman the White House’s statement and a copy of the certificate, and after a few minutes he called back ready to talk. “If this is the true birth certificate, I’m very happy to finally see it,” he said. But today’s news didn’t answer his lingering doubts; if anything, it raised even more questions. Berman was comparing the White House release with another birth certificate he said was from Mombasa, Kenya. “There are two hospitals [in Honolulu] at the time and neither hospital will claim him,” Berman said. “Today, if you have a hospital where the president was born they’d probably take the room where he was born and make a shrine out of it.” Plus, the Kenyan certificate just seemed more compelling: “When I look at the one from Kenya, there is a British lord who is the clerk for registering all births in Kenya at that time.” He added, “The one from Mombasa even has a footprint on it. Like a human footprint.”

Berman also raised concerns that the listed address for Obama’s mother, Ann Dunham, was false, and that the attendant’s signature might be a ruse as well: “The name of the person certifying the doctor, David A. somebody. Looks like S-M-I-L-N or something. Smilin? Where it says the ‘signature of attendant.’ I wonder if he’s still living?” He also suggested that Obama benefited from outside assistance in getting into Columbia—echoing, in part, an allegation made by Donald Trump. “I don’t know who paid for it,” he explained.

Berman said he has no plans to drop his bill but wasn’t optimistic it would become law. “I don’t think it’s going anywhere,” he said. “I don’t think our governor wants to cause any disruptions. He wants to go on with the usual campaign issues.”

The birther hysteria won’t go away because in many ways the birther movement really isn’t about the birth certificate. The birth certificate was a sort of gateway drug, but the good stuff, the really good stuff, came much deeper down the WorldNetDaily rabbit hole—Faith2Action’s Janet Porter, for instance, trumpeted the idea that President Obama is (or was) a Soviet spy. That would explain, for example, how he got into such good schools despite being, as Donald Trump and Berman have alleged, a total dunce. If you accept the premise that Barack Obama’s rise to the top has been aided by nefarious foreign nationals and/or domestic radicals, the matter of a piece of paper from the state of Hawaii really isn’t going to change things that much. That’s just science.