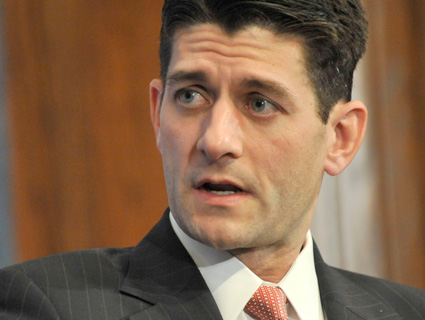 That’s one way of viewing the 235-to-193 party line vote in the House of Representatives on Friday afternoon for the 2012 budget proposed by Rep. Raul Ryan (R-Wisc.), the chair of the House Budget committee.

Ryan’s plan has become the latest front in Washington’s budget wars, following the tussle over the 2011 budget that ended in a bipartisan deal that included $38.5 billion in spending cuts. This current round—which precedes the coming fight over raising the national debt ceiling—is more perilous for the Republicans, for the Ryan proposal presents the Republicans in all their Republicaness, as the party that wants to end Medicaid and Medicare as these programs currently exist (that is, wipe out the guarantee of medical care for the poor and for the elderly), while tossing a trillion dollars in tax cut bonuses to well-to-do Americans. (Only four House GOPers voted against the measure.)

With this vote, the GOP is embracing the caricature of itself: telling the poor they’ll have to do with less, throwing granny out of the hospital bed, and easing life for gazillionaires. Of course, the party claims its proposed “reforms”—doling out block grants to the states to cover some of the costs of health care for the poor and employing a privatized voucher system for the elderly that won’t provide any guarantee of medical services—will strengthen Medicaid and Medicare. And it’s again wheeling out its argument that restoring tax rates from the booming 1990s will impede economic growth. But essentially the Republican Party is resorting to the same-old same-old: market fetishism and trickle-down economics—and accusing President Barack Obama and others who link the GOP’s Medicare and Medicaid cuts to tax breaks for billionaires of engaging in “class warfare.” (Apparently, it is not class warfare to squeeze the poor and the elderly to create fiscal room for tax cuts for the wealthy.)

The obvious political question is: have the Rs gone too far?

During the 2011 budget dust-up, the GOP message was simple (perhaps simplistic): cut spending to save the economy. This may not make sense, for slashing spending can reduce demand, which is not likely to boost an already sluggish economy. But it sure sounds reasonable. After all, if individual households have to tighten their belts in hard times, shouldn’t the government? During this debate, there was not much focus on the particular targets of the cuts. The back-and-forth mainly concerned big numbers: $61 billion or $32 billion or $38.5 billion. As public opinion polls demonstrate consistently, cutting spending is far more appealing in the abstract. With much of this skirmish centered on abstractions, the GOP had an advantage.

Round 2 is not so abstract. The main targets are front and center, and when it comes to Medicare, voters really care.

The Republicans seem to know this. Last year, they ran attack ads against Democrats assailing the Ds for supporting Obama’s health care initiative, which included hundreds of billions of dollars in Medicare savings that the GOPs blasted as “cuts” that would threaten the program. Yet now they are proposing a far more radical change that would eviscerate Medicare’s foundational premise: guaranteed service. In Ryan’s Brave New World, future seniors (people who are now below the age of 55) would be handed vouchers they can use to obtain insurance, which may or may not cover all the health care they need, and they would have to pay thousands of dollars more per year to cover their medical bills.

This ought to concentrate the minds of voters—including those of an independent stripe—who are looking forward to guaranteed Medicare health care for themselves or their parents. No doubt, most of the people who are near that 55-cut-off have seen Medicare deliver affordable and decent care to their parents, friends, and colleagues. The system works, and these soon-to-be seniors will want the same deal for themselves. Their kids, facing an uncertain economic period and a weak job market, should also desire a robust Medicare guarantee for their nearing-retirement parents. Consequently, Ryan’s plan to limit and privatize Medicare—which is based on the iffy notion that competition among private insurers for customers who tend to need expensive services will drive down costs—probably won’t sound like a good bargain to many.

But Republicans don’t seem to be able to help themselves. Filled to the brim with an antipathy toward government and a fixation with free-market cant, they are rushing forward with Ryan on to a political minefield, congratulating themselves on having the courage to take this course. After having a difficult time contending with the GOP’s never-ending chants for government spending cuts, Obama finally has a counter-weight: the Republicans want to demolish an essential and effective government program that you or a parent might need to lower taxes for the swells. Obama is still battling on GOP turf, for the most pressing issue remains what to cut (instead of say, what programs should be expanded to create jobs as soon as possible). Yet he now has an argument almost as easy to convey and grasp as the GOP’s cut-cut-cut mantra.

In his speech on Wednesday, Obama attempted to define the current face-off as a difference of vision and values. Republicans, he said, want to pull the plug on communal commitments and rely on markets and individual resourcefulness. He and the Democrats, he noted, believe in banding together, via government when necessary, to enhance the general well-being of the nation. Turning a mud-wrestle over billions here and billions there into such a high-minded debate is a heavy lift. With Ryan’s budget in the spotlight, Obama has a shot at this.

Perhaps in the long run—meaning the time between now and the elections in November 2012—popular dissatisfaction with the economy will trump everything else, and Obama and the Democrats will once again feel the wrath of pissed-off voters. But the Ryan plan offers a possible escape route for the president and his party. In tough times, the party on the outs (which in 2012 will still be the Republicans) strives to define an election as a referendum on the folks in charge: If you don’t like how things are going, vote the bum out. In response, the in-power party tries to present the election as a choice: You may not love us, but the other guys will really screw things up. Last November, the Republicans got the far better end of this conventional dynamic. Yet today, House Speaker John Boehner (R-Ohio) and his Republicans made it easier for the White House and the Democrats to set up a choice-election in 2012. They did so just by being themselves.