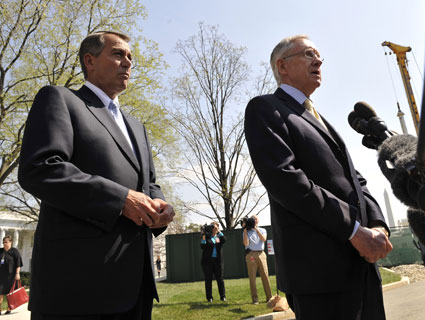 Speaker of the House John Boehner (R-Ohio) and Senate majority leader Harry Reid (D-Nev.) speak to reporters after meeting with President Obama about the budget and a possible government shutdown.Zhang Jun/Zuma.

*Update: Late Friday night, an hour before a scheduled government shutdown, Boehner and the Democrats reached a budget deal with a reported $38.5 billion in spending cuts. The deal includes a temporary six-day budget extension, with a final vote on spending for the rest of year scheduled for Thursday. Democratic officials say they convinced Republicans to drop the restrictions from funding for family planning groups, while Republicans say they extracted more spending cuts than they would have otherwise. But the full details haven’t been released yet, so we’ll see what the damage looks like soon.

Late Friday, with just hours left before a possible government shutdown, there was still no sign of a budget deal. It wasn’t just that Democrats and Republicans couldn’t agree on funding the government—they couldn’t even decide what they were fighting about.

On Friday morning, Senate Majority Leader Harry Reid (D-Nev.) declared that there was no disagreement over a final budget number. The number, Reid said, wasn’t the problem: Republicans are blocking a deal over funding for Planned Parenthood and women’s health services.

But after a midday meeting with House Speaker John Boehner (R-Ohio), congressional Republicans told a different story. It isn’t the controversial restrictions on funding for reproductive health and services that are holding up a deal, GOPers said: They just want deeper budget cuts.

Republicans noted that a Democrat-controlled Congress had passed a 2009 budget that included the same rider that prohibited the District of Columbia from using not just federal, but local money for abortions. “It can’t be controversial. [The President] signed it when the Democrats were in control. Why is it a Republican problem?” Rep. Darrell Issa (R-Calif.) told reporters after the GOP caucus meeting early Friday afternoon. What’s more, they pointed out, the DC abortion ban was in place from 1988 through 1993 and 1995 through 2009—and Reid, Obama, and Vice President Joe Biden voted for budgets that included it multiple times. “Who’s being dishonest here? It appears to me it’s Senator Reid and the president,” Rep. Tom Price (R-Ga.) told Mother Jones, echoing a claim that’s circulating throughout the right-wing blogosophere.

But Democrats on Capitol Hill said that when President Obama and the Democrats signed off on the 2009 budget with the DC abortion rider, they were essentially putting through a clean-up omnibus that was drawn up by the previous administration. “This is something that Republicans put in when they’re in power and Democrats take out when we’re in. Obama signed it in [early] 2009 as part of an omnibus that had basically been written by Bush in 2008 but not passed in ’08 because of the financial crisis,” a Democratic Senate aide explained in an email. Obama ultimately initiated his own push to repeal the decade-old DC ban when he introduced his budget just a few months later. By July 2009, Obama and the Democrats passed a standalone measure lifting the ban on local abortion funding for the District of Columbia—a move hailed by pro-choice groups as a major step forward for abortion rights.

What’s more, the DC abortion funding ban is only a minor part of the war over women’s health. Reps. Dianne DeGette (D-Colo.) and Jan Schakowsky (D-Ill.), the co-chairwomen of the House pro-choice caucus, said Friday they’ll vote against any budget that includes the DC abortion ban. But other riders are even likelier to be a sticking point in the budget negotiations. One would strip all funding for health services—not abortions, which receive no federal dollars—from Planned Parenthood, as well as Title X funding for family planning and preventive health clinics across the country. The money in question “goes for so many things—pregnancy prevention and birth control. It also goes for breast cancer screening, HIV/AIDS screening, cervical cancer screening,” DeGette said on Friday.

These provisions, not just the DC abortion ban, are likely the driving force behind Obama’s announcement on Thursday that he’d veto any bill with ideological riders. Though Republicans deny that policy riders are holding up the budget negotiations—with some even wildly dodging the question of abortion and Planned Parenthood funding—a few legislators admit that the controversial riders still aren’t totally off the table. Boehner “said essentially the policy riders have been worked out, but he didn’t say ‘all’ [of them],” Rep. Phil Gingrey (R-Ga.) explained.

Democrats, to be sure, aren’t wasting any time in pointing fingers and pounding chests to drive their point home. “What we’re facing now is World War III, and it’s the Republican war on women,” Rep. Carolyn Maloney (D-N.Y.) declared at a press conference on Friday. “We’re mad as hell, and we’re not going to take it anymore,” Schakowsky added before members scattered to cast a vote on the House floor. Another Democrat, Rep. Jerrold Nadler of New York, went so far as to accuse Republicans of imposing a “dictatorship” that demands “everybody does everything our way and no compromise.” Nadler added: “They want everything, and everything happens to be a war on women.”