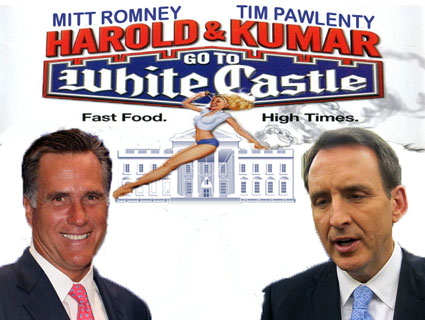 When it comes to pot, we’ve come a long way from the days of “I did not inhale.” Fifteen states (plus the District of Columbia) currently permit the use of marijuana for medicinal purposes, and according to a recent Pew survey, 45-percent of Americans say they’d support legalizing marijuana outright—a 29-point increase from just two decades ago. Cannabis is fast losing its political stigma, too: The GOP might march in lockstep on abortion and tax cuts, but when it comes to pot, things get a bit hazier. Some of the party’s presidential candidates have never touched the stuff; more than a few of them inhaled; one of them even got nabbed in a drug bust. In honor of 4/20, here’s a quick guide to where the GOP’s 2012 contenders stand on pot:

Mitch Daniels: As a student in Princeton, the Indiana governor was arrested in a police sting that netted two size-12 shoeboxes worth of marijuana, along with LSD and drug paraphernalia. Daniels was cited for pot possession but got off with a $350 fine for “maintaining a common nuisance.” He told the Daily Princetonian in 1988 that because of the arrest “any goal I might have had for competing for public office were shot,” and later called the incident an “unfortunate confluence of my wild oats period and America’s libertine apogee” (far out!). As governor, Daniels has endorsed alternative sentencing for non-violent offenses like pot possession as a way to reduce prison overcrowding.

Jon Huntsman: In 1978, the US ambassador to China dropped out of high school to play in a prog rock band called “Wizard.” As Politico noted, two of his bandmates were “very active in drugs,” but Huntsman, who is Mormon, never joined in, and a friend says he “never saw him inhale.” Medical marijuana is not legal in Utah, where Huntsman was governor for four years.

Mike Huckabee: He opposes marijuana legalization in any form, but did invite Tommy Chong (of Cheech and Chong fame) on his TV show to discuss pot policy, for a segment called “Is Pot Ruining Our Kids?” Chong ended the segment by calling Huckabee a “mushroom farmer,” because “you keep ’em in the dark and throw [expletive] at them”:

Mitt Romney: The former Massachusetts governor opposes the legalization of recreational or medical marijuana, although he endorsed the use of synthetic pot. In his most recent book, No Apology, he attributes the legalization movement to “the passion and zeal of those members of the pleasure-seeking generation that never grew up.”

Tim Pawlenty: As governor of Minnesota, Pawlenty vetoed a 2009 bill that would have legalized medical marijuana. He also vetoed a bill one year later that would have eliminated bong water from the list of controlled substances (currently, police officers can add the weight of bong water to the total weight of the confiscated substances). He recently told Jon Stewart he was “conflicted” about the bong water bill, but wanted to give law enforcement some wiggle room: “If they get a bad apple, and they want to put the bad apple on the line, it gives them a little extra [leverage].”

Donald Trump: Trump argued in 1990 that the only way to win the War on Drugs was to legalize drugs and use the tax revenue to fund drug education programs. As he put it, “You have to take the profit away from these drug czars.” In his 2000 book, The America We Deserve, he stated that he’d never tried drugs “of any kind.”

Sarah Palin: The former Alaska governor and reality TV star told Fox News last summer that while she’s not for legalization, she’s not exactly for enforcement, either: “If somebody’s gonna smoke a joint in their house and not do anybody else any harm, then perhaps there are other things our cops should be looking at to engage in and try to clean up some of the other problems that we have in society…and not concentrate on such a relatively speaking minimal problem.” Palin has said she smoked pot when she was younger—and yes, she inhaled.

Newt Gingrich: The buzz: He’s admitted to smoking pot at a college party at Tulane, explaining, “That was a sign we were alive and in graduate school in that era.” As a congressman in 1982, Gingrich wrote a letter to the Journal of the American Medical Association calling for the legalization of medical marijuana. The buzz kill: Gingrich now says that pot legalization would tear America apart: “Every place drugs are legalized the net effect is more people on welfare, more people who are dependent, more people with bad health care outcomes, fewer people who are able workers able to pay attention on the job and a drain of money into illegality, because immediately behind legalized marijuana comes cocaine and heroin.” And then, presumably, Hitler.

Ron Paul: The Texas rep and libertarian icon sponsored legislation to decriminalize the personal use of marijuana at the federal level in 2008, and believes that the power to legalize or prohibit pot should be left up to individual states. Paul has called the drug war “tragic” and a waste of money. He’s also Congress’ biggest champion of hemp, marijuana’s non-psychoactive cousin. Here’s a video of Paul debating pot legalization (and Michael Phelps’ bong photo) with Stephen Baldwin and Joy Behar:

Rand Paul: As a student at Baylor, Paul and his friends once reportedly kidnapped a female student and asked her to worship a river god they called “Aqua Buddha.” The freshman Kentucky senator isn’t as high on the buddha (so to speak) as his father—Rand opposes legalization—but he has criticized sentencing policies and pushed to cut spending for federal drug stings (a big deal in rural Kentucky, where’s pot’s become a major cash crop).

Gary Johnson: In an address to Glenn Beck’s 9/12 rally in Washington in 2010, the former New Mexico governor called for a full-scale legalization of pot, stating that “half of what we spend on law enforcement, the courts, and the prisons, is drug related.” Johnson used medical marijuana from 2005 through 2008, while he was recovering from a paragliding injury.

Rick Santorum: Has admitted to smoking pot in college.

Buddy Roemer: The former Louisiana governor once hired a new-age shaman to help him get his life back together following a very public mid-life crisis. Perhaps unsurprisingly, he also signed a law legalizing medical marijuana in the Pelican State.

Michele Bachmann and Herman Cain: Have not commented publicly on the issue, but confused opponents have occasionally speculated as to what they might be smoking.