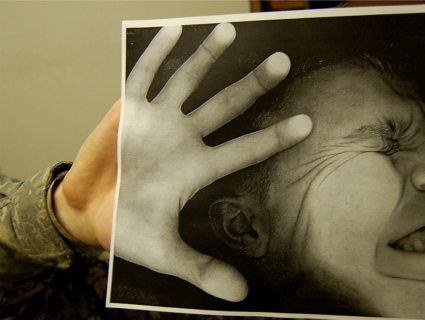 Over the weekend, House Majority Whip Eric Cantor (R-Va.) paraded out tea party darling and retired Army lieutenant colonel Rep. Allen West (R-Fla.), to announce a bold initiative that would reduce military spending by $37.5 million this year: cutting color copies. “After serving 22 years in the United States Army, I am aware of areas where saving money is very possible,” West said of his proposed paper cuts, which Congress passed with bipartisan support Monday night. But despite the fanfare, his proposed trim is so paltry—just 0.00357 percent of the entire annual defense-related budget, or what the US spends on the wars in Afghanistan and Iraq every two-and-a-half hours—that it’s adding to tea partiers’ growing concerns about whether Republicans are serious about budget-cutting.

West originally had three proposals to chop the military budget: reduce the Defense Department’s printing expenditures by 10 percent; stop producing so many military research reports; and deny pay raises to Pentagon employees with poor evaluations. Cantor posted the three plans on his “YouCut” website and asked readers to pick their favorite, which West would then introduce as a House bill. Voters overwhelmingly chose the printing-budget reduction. As Cantor explained, “While paper copies are often necessary for mission accomplishment, DOD should be encouraged to reduce spending on high quality, glossy color prints.” Total savings from toning down Pentagon copies? An estimated $180 million saved by 2016—barely enough to buy one-fifth of the US Tomahawk missiles launched at Libya so far.

The Pentagon copier cuts also pale in comparison with some of West’s favored spending priorities. Two weeks before announcing his war on color copies, West secured a $21 million federal grant to expand the runways at Fort Lauderdale/Hollywood International Airport, in his home district. The controversial project, called “monstrous” by its critics, is expected to cost $791 million before its 2014 completion, more than quadruple the savings of West’s proposed defense printing cut. His military savings plan also pales in comparison to the revenue he helped secure for a private contractor, Military Professional Resources Inc., when he trained Afghan soldiers and police officers after his Army retirement. MPRI recently won a contract to continue that work through the end of 2011, worth $156 million contract for this year alone.

Having trouble visualizing how the GOP’s paper cuts stack up against all the United States’ other military spending? Check out this slideshow of other “national security” stuff that Republicans could have cut to save the same amount.

“It is unfortunate that someone who rails against out-of-control government spending and promises to carry the torch of conservative, small government principles with him to Washington is also a supporter of the welfare state,” says Lawrence M. Vance of the Tenth Amendment Center, a tea party-friendly group that advocates a smaller federal government. “He is a Tea Party statist.” Michelle Stanley, who runs the Richmond Patriots tea party group in Virginia, agrees. “I think maybe Rep. Allen West might need to check the tea party definition of ‘wasteful spending,'” she says. “And it pains me to say this because the new freshman congressmen is one of my favorites.”

West is hardly the only conservative member of Congress with a distaste for real military cuts. In March, Mother Jones reported that C.W. Bill Young, a longtime representative from the Florida panhandle, was forcing the Army to buy unneeded Humvee vehicles rather than using the cash on systems that would protect soldiers on bases in Afghanistan. (Young has received more than $80,000 in campaign contributions from AM General, the makers of the now-outdated military vehicle.) House Speaker John Boehner (R-Ohio) has taken heat for trying to save a $450 billion program that builds spare engines for the military’s new Joint Strike Fighter. Defense Secretary Robert Gates has repeatedly tried to kill the plan, calling it a waste, but much of the money would be headed back to defense contractors in Boehner’s home state. And a recent study by the Heritage Foundation found that conservative GOP freshmen were more likely than longtime representatives to vote against the 13 cuts in military spending proposed so far in the 112th Congress. “So where were all of the Tea Party, defense-cutting Freshman on those votes?” the report concluded.

Tough-on-spending tea party leaders aren’t happy. Mark Meckler and Jenny Beth Martin, who head the umbrella organization Tea Party Patriots, have had stern words for the GOP leadership. “Members of Congress have abandoned their service to the people by passing continuing resolutions instead of cutting the $100 billion they pledged,” they said in a release late last month. “Is it lack or leadership? Is it a lack of courage? A real budget will spark a national debate on the role of government, and that’s what the American people want.” Judson Phillips, the controversial leader of Tea Party Nation, strikes a similar chord. “Everyone realizes that the level of spending cannot be sustained,” he says. “John Boehner did not get that message.”

To keep the grassroots happy, even Republican up-and-comers like West may have to be more careful when they roll out a messaging strategy with no real budget-cutting to back it up. “Rep. West,” says Richmond Patriots’ Stanley, “was one of the last congressman I thought we would have to remind that ‘We The People’ are watching.”