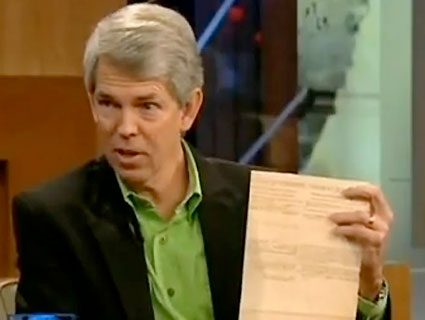 Newt Gingrich is a fan. So’s Michele Bachmann. Mike Huckabee’s such a booster that he recently said that all Americans should be “forced at gunpoint” to listen to this guy.

The object of this high praise from Huckabee—and recent shout-outs from other potential GOP presidential contenders—is David Barton, a Republican activist and minister who founded WallBuilders, a for-profit evangelical outfit that works to inject religion into politics. Barton holds some pretty unconventional views, and in the past he has spoken alongside fringe figures like Holocaust deniers and white supremacists. Among other things, he claims that Jesus would oppose the capital gains tax and the minimum wage; that global warming is “self-correcting”; and that the nation’s homeland security apparatus has been infiltrated by members of the Muslim Brotherhood. He also contends that the separation of church and state is a perversion of the Founding Fathers’ intention to create a Christian nation.

Barton is just the latest in a long, loud tradition of charismatic evangelicals capable of commanding legions of fundamentalist Christians, stretching from Billy Graham to Jerry Falwell to James Dobson. But unlike other evangelical leaders, Barton’s focus is on history—or his own unique version of it.

So why are some of the GOP’s top presidential contenders—along with a host of other Republican notables—touting Barton? Probably because of the undeniable appeal he holds for the evangelical community—a vital voting bloc for the Republican Party.

“The dance these candidates have to perform is somewhat delicate,” says Rob Boston, a senior policy analyst at Americans United for Separation of Church and State who’s tracked Barton for years. “They want to get the base fired up during primary season.”

At the American Family Association’s Rediscover God in America conference last month, Huckabee sang Barton’s praises. “I just wish that every single young person in America would be able to be under his tutelage, and understand something about who we really are as a nation,” Huckabee said. “I almost wish that there would be…a simultaneous telecast, and all Americans would be forced—forced at gunpoint, no less—to listen to every David Barton message, and I think our country would be better for it.” Gingrich recently said he “never listen[s] to David Barton without learning a whole lot of new things. It’s amazing how much he knows and how consistently he applies that knowledge.”

Barton concocts his arguments about American history from highly selective, professionally debunked readings of founding documents—some 100,000 of which he’s ferreted away in a vault in WallBuilders’ Aledo, Texas, headquarters. His life’s mission is to restore what he regards as the broken relationship between church and state. Through WallBuilders, Barton publishes books and finances a virtually nonstop speaking tour that, over the past two decades, has turned him into a superstar of the religious right.

Barton promotes the idea of a “stolen legacy”: that the Christian history that birthed the United States and nurtured its national consciousness has been deliberately obscured by liberals. America’s religious history, according to Barton, has been covered up through a concerted movement to deny the facts. It’s a “a very powerful, validating force for people in the religious Right…’We are the real inheritors of this nation,'” Boston says.

For years, Barton’s most extreme arguments—like how science always confirms the word of the Bible (explaining why global warming and embryonic stem cell research are hokum) or how the story of the Tower of Babel proves that God hates socialism—were confined to Christian talk shows and his national speaking circuit. In 2009, the Christian Broadcasting Network hosted Barton for a two-week, 10-part special on the program Gospel Truth with Andrew Wommack to explain why Christians should control every aspect of American society. He spent some time laying out God’s case against socialism: “Bureaucracy treats everybody like they’re a brick. And that’s the problem with socialism, is you’re a brick, when you need to be a living stone that’s unique, like a snowflake, like a DNA cell, like an iris in an eye; every one of them is different. And that’s what got God ticked off.” This is typical Barton: encoding a conventional conservative talking point in evangispeak, distorting the Bible to justify the Republican Party’s agenda.

Barton’s ascension into the conservative upper crust has been gradual. In 2004, he led the Republican National Committee’s outreach to members of the clergy nationwide. According to Chris Rodda, senior research director for the Military Religious Freedom Foundation and a longtime Barton-watcher, his method is to indoctrinate the clergy, who go back to their congregations to organize voter registration drives. “They need to convince these Christians that Barton’s version of history is true, so that they feel the right-wing agenda is justified by history,” she explains. Barton, she says, continues to do this outreach work.

But now, thanks to Glenn Beck and Huckabee—both of whom have hosted Barton on their shows on the Fox News Channel—he’s been catapulted from the megachurch speaking circuit to the mainstream. Gingrich certainly took notice. In 2009, the possible presidential contender and born-again Catholic spoke at a number of Barton’s clergy powwows. (As he tests the presidential waters, Gingrich has also courted another controversial evangelical leader from Texas, John Hagee.)

Michele Bachmann’s relationship with Barton dates back to her time in Minnesota’s state senate, when she enlisted his help in drafting a bill requiring public schools to include alternative explanations for the origin of life as part of the state’s public school science curricula. (The bill had four cosponsors, but died in committee.) And last November, she announced plans to hold “Constitution classes” for new lawmakers to keep them from being “co-opted into the Washington system”—and she invited Barton to teach.

Bachmann is also a big supporter of Barton’s “Spiritual Heritage” tours of the US Capitol, aimed at educating new lawmakers on “the foundational role God has played throughout American history.” (Watch a promotional video for the tours below.) Reps. Todd Akin (R-Mo.) and Pennsylvania’s Joe Pitts (the author of a recent controversial anti-abortion measure) are among the lawmakers who have taken part in Barton’s tours.

Such events have only widened Barton’s sphere of influence in Washington. “As politicians have adopted him, cozied up to him, he seems to be speculating even more widely now on even more GOP talking points,” says Ryan Valentine, a deputy director at the Texas Freedom Network, a grassroots watchdog organization that keeps an eye on the religious right. “His lack of expertise in an area does not slow him down.”

But he’s not a big fan of defending his views. Last month, Barton ducked out of an invitation to debate a blogger who has been calling him out in recent weeks. And he didn’t respond to an interview request from Mother Jones.