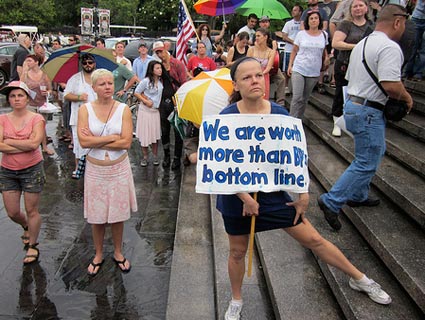 Read about the top 10 reasons to still be pissed off about the BP spill here.

The Gulf oil disaster largely disappeared from the headlines last August, after the well was finally capped and the federal government declared that most of the oil was “gone.”

For Gulf coast residents, though, the nightmare was just beginning. A year later, business hasn’t come back for many in fishing and tourism, and the compensation check from BP still hasn’t arrived. In the areas closest to the shores, people are reporting health problems consistent with exposure to chemicals. Dead turtles, dolphins and fish are still washing ashore. So are tar balls. So while most of the country has moved on, a number of Gulf coast residents have been in DC over the past week to tell decisionmakers one thing: It’s not over.

Mother Jones talked to with several Gulf residents who have become advocates for their communities in the wake of the spill. 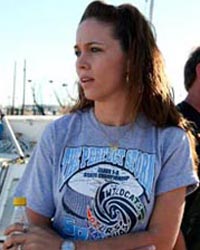 Arnesen and her husband, David, were just putting the finishing touches on the house they rebuilt after Hurricane Katrina when the Deepwater Horizon exploded. The disaster made an accidental activist out of this fisherman’s wife and restaurant owner.

“We’re not used to having to come up here and ask all these agencies in DC to do what our tax dollars pay them to do. I own two homes, a restaurant, and four boats. I’ve put that back together in the last five years. I don’t owe no money on anything. We work really, really hard for what we do and what we get, and then it is almost like we’re painted by our own politicians through their actions, or lack thereof, as people that don’t need to exist, like we are expendable.”

Foytlin, a reporter, wife of an oilfield worker, and mother of six, walked 1,243 miles from New Orleans to Washington, DC, to demand a better future for Gulf residents.

“I would love for my husband to be making solar panels, but all the solar panels are being made in China. One of the things I’m totally advocating is bringing clean energy jobs here, and then providing subsidies so our oil workers get those jobs first.” 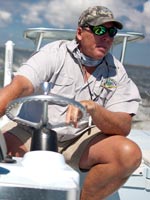 Lambert rebuilt his charter boat company, Cajun Fishing Adventures, after it was destroyed by Hurricane Katrina. But a year after the oil disaster began, business still hasn’t come back.

“BP hasn’t made people whole. I’m not saying I’m so much worried about me, because financially, I’m okay. I’m the oldest one in the business, just about. But the youngest guys are starving to death. People are losing their homes, losing their boats and there’s BP advertising that they’re spending millions of dollars. They’re not. They’re not making anyone whole.”