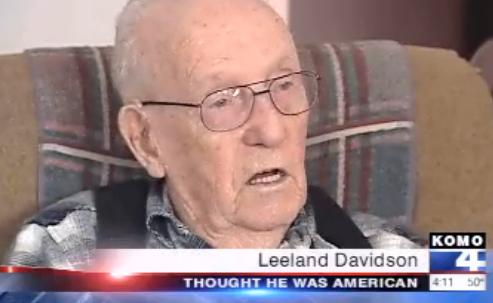 If this won’t make a birther’s head explode, nothing will.

Meet Leeland Davidson, 95, of Centralia, Washington. He was a cracker-jack sailor for Uncle Sam’s Navy in the big one, Double-You Double-You Eye-Eye. He’s made his home in the Pacific Northwest forever. He’s on Social Security. And he recently looked into getting an “enhanced driver’s license” so he could trek over the border to visit a Canadian cousin, who’s the same age, according to KOMO-TV and Yahoo.

Davidson didn’t get the license. Because he’s not a US citizen. And the old man’s been told that if he presses the point, he could be deported…to Canada.

See, it turns out he was born in British Columbia in 1916. As in the year of the Easter Rebellion and the Battle of the Somme. Sure, Davidson’s parents were “American,” as in “born in apple-pie locales like Nebraska (mom) and Iowa (dad).” But in terms of keeping up on paperwork, his folks might as well have been godless Huns in the service of the kaiser, since they couldn’t be bothered to file any documents with Uncle Sam on young Leeland’s situation. It’s like some strange reverse-anchor-baby deal: Make your debut on the wrong side of the border, and lose your shot at Americanness, no matter how many Japanese subs you sink or Toby Keith songs you listen to.

Of course, once the bombs fell on Pearl Harbor, the Navy didn’t care about his birthin’:

He checked up on his citizenship before joining the Navy and was told by an inspector at the U.S. Department of Labor Immigration and Naturalization Service he had nothing to worry about. Now he worries that he won’t be able to prove his citizenship, because his parents were born in Iowa before local governments started keeping records of birth certificates in 1880. “I want it squared away before I pass away,” he says.

But wait for the best part! Davidson’s daughter kinda wishes he’d drop the whole thing, because: “Employees at the local passport office scared them, telling her father ‘If he pursued it, (he could) possibly be deported or [be] at risk of losing Social Security.'”

Let that one sink in. Better yet, just watch the video below. The good news is, some section of the federal government is hip to the Kafkaesque absurdity going down here, and has assured Davidson he can join the ranks of les Américains with signatures on a few form letters. We’re sure the intercession of Sen. Patty Murray (D-Wash.) didn’t hurt. But for Davidson’s sake, he’s lucky the Evergreen State’s pols are a little more enlightened than Louie Gohmert, Steve King, and Russell Pearce. Where’s the longform “certificate of citizenship”, dammit?!

“I’m an American citizen,” Davidson told KOMO. “Why should I have to fill out these forms, that’s what irks me.”

How rude and presumptuous. He must be a foreigner!