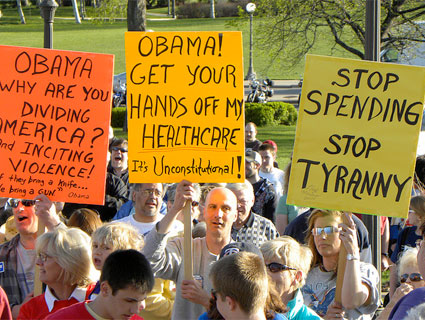 The tea party has a new plan to attack health care reform. While some conservative activists are still fighting to get the law defunded and eventually repealed, others are organizing behind a radical, states’-rights proposal that would go beyond merely derailing health reform. Egged on by tea partiers, at least a dozen states are now contemplating legislation that supporters believe would allow them to seize control of and administer virtually all federal health care programs operating in their states and exempt them from the requirements of the health care law. That includes Medicare, the government health care program for the elderly on which a sizable number of tea partiers rely.

The vehicle for this reform end run is called the health care compact, an interstate compact not very different in theory from the ones states use to create regional transit authorities, for instance. Recently, the nation’s largest tea party group, the Tea Party Patriots, has thrown its weight behind the concept, seeing it as another way of downsizing the federal government. But the group may have other motivations, too. TPP has received a significant amount of money from the measure’s backer, the Health Care Compact Alliance, an organization bankrolled by the right-wing heir to a Texas construction company fortune. Last month, the Alliance underwrote TPP’s policy summit in Phoenix for a sponsorship advertised at $250,000. It has also become a regular advertiser on TPP’s website and email promotions.

Along with TPP’s endorsement comes its considerable army of activists, who are working to persuade state legislatures to pass laws to join the interstate compact rather than to implement parts of the new federal health care reform law. The Georgia House, which recently refused to move legislation that would create health insurance “exchanges” as required under the Affordable Care Act, also passed health care compact legislation. States including Tennessee, Oklahoma, Montana, Arizona, and Missouri are currently considering similar bills.

Despite the flurry of legislative activity, the compact is a longshot. The Alliance website promoting the proposal describes it as “simply an agreement between two or more states that is consented to by Congress—that restores authority and responsibility for health care regulation to the member states (except for military health care, which will remain federal), and provides the funds to the states to fulfill that responsibility.” Proponents seem to believe that the compact is actually a shortcut to their goal of defunding reform because of its alleged simplicity. Once two or more states sign on, all they think they need is congressional consent, and billions in federal health dollars will suddenly be turned over to the states without any strings attached—and without the signature of the president. Easy, right?

Opponents have their doubts. They say there’s no precedent for using interstate compacts in this way. Typically, states employ such agreements for things like managing ports, fishing rights, and water allocation—not to nullify federal regulations. And they say that it’s unlikely Congress would sign off—even under Republican control.

What isn’t in dispute is how much money is in play. In Texas alone, where the House Committee on State Sovereignty held a hearing on a proposed compact bill in mid-March, the state could theoretically gain control of $60.4 billion dollars annually to run Medicare, community health centers, and an assortment of other programs that are presently federally administered. But the notion of the Texas legislature running Medicare, much less the other programs, may not end up being all that appealing to state residents, even tea partiers, once they realize how the compact works in practical terms.

Should the state assume control over the federal money, it would lose access to the automatic increases that come in times of crisis, like the stimulus funding that helped prop up state Medicaid funds during the recession. State control would also provide no mechanism or extra funding to cover the uninsured, who number more than 6 million in Texas alone. More significantly, though, the federal funding levels would be essentially fixed in 2010 dollars, with a minor provision for small inflation- and population-related increases.

Texans only have to look to the state’s management of Medicaid—the government-run health care program for the poor, which involves both state and federal funds but is largely administered by the states—to see what this might mean for seniors. Anne Dunkelberg, the associate director of the Center for Public Policy Priorities in Texas, notes that Texas has only raised Medicaid reimbursement rates for doctors twice in as many decades, most recently in 2007. Texas Medicaid only pays about 73 percent of what Medicare does for the same services. As a result, only about 40 percent of Texas doctors will take new Medicaid patients, a rate that’s fallen from nearly 70 percent in 2000. If Texas applied a similar approach to Medicare, millions of the state’s seniors could find themselves shut out of the health care system. “You would never get an annual increase in rates,” Dunkelberg says, noting that doctors nationally are already unhappy with Medicare rates and are dropping older patients.

Even so, compact backers in Texas have raised $300,000 to get it passed. But given the many obstacles the proposal faces, Dunkelberg wonders if it isn’t merely a well-funded effort to keep tea partiers busy until the 2012 presidential campaign swings into gear. “It’s more an organizing activity,” she speculates. “More of a way to build opposition to our current federalized system of health care.”

But Leo Linbeck III, a co-founder of the Health Care Compact Alliance and one of the primary forces behind the effort, says it’s not an organizing ploy. “I’m involved in this because I have come to believe that we need a structural solution to the health care problem, and neither party can provide such a solution at the federal level; all of the incentives are aligned against it,” he wrote in an email, in response to questions from Mother Jones. (You can read the entire exchange here.)

Linbeck is not the first member of his family to spend big money on a quixotic right-wing campaign with little chance of succeeding. His father, Leo Linbeck Jr., who inherited a hugely profitable construction company from his father, is the engine behind the “fair tax,” a proposal to eliminate income, payroll, and estate taxes and replace them with a highly regressive 23 percent sales tax. Leo Jr., who has said the research and marketing of the fair tax has cost $20 million, has been promoting it in state legislatures since 1993, with little to show for it (though he, too, is finding a new audience among tea partiers).

The Linbeck dynasty is famous in Texas for underwriting conservative causes, particularly tort reform, an issue that provided the basis for all of George W. Bush’s political campaigns. In 1994, Leo Jr. helped found Texans for Lawsuit Reform, along with Swift Boat Veterans for Truth funder Bob Perry to help eliminate laws that allowed people to sue their various big companies. They largely succeeded in Texas, and their backing also helped put Bush in the White House.

Leo III insists that the compact is a serious proposal, and one that was inspired by noble reasons and concern for the poor, who currently subsidize health care for wealthy seniors. He says, “I saw that we were on an unsustainable path on Medicare, and the federal government was making promises to senior citizens that it could not fulfill… That struck me as fundamentally unjust.”