Sometimes the smallest of things can have the greatest of impacts. We’ve all woken up to find we’ve no milk in the fridge and got to wondering how we ever did without it! Well, as strange as it may sound the Pacific herring is a little like that.

Commonly referred to as “the silver of the sea,” these oily little fish have proved to be the most commercially important part of the fishing industry. Being a staple part of the human diet since at least 3000 B.C. Although, it’s not just humans who have developed a taste for these delicate bait bits. With a list of predators as long as your arm, it’s not surprising that they have developed a way of breeding which ensures their survival. 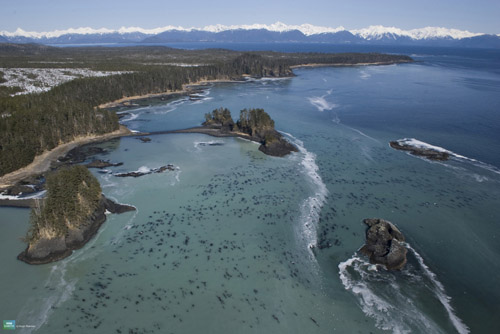 Ecological biomass is a term used to describe how living biological organisms group together to defend their species against the many predators they face, there is after all power in numbers! This isn’t an uncommon technique, and we see similarities in the breeding habits of many animals, particularly those who live in herds. What is truly spectacular however is how a species can be pushed to its absolute limits, and come back again in full force! Although clearly hardy, herring remain a sensitive species being affected by overfishing in general, overfishing of its young as well as environmental events. Thankfully, scientists and fishermen are making efforts to rebuild and protect stocks, assuring that humans and animals can enjoy this vitamin rich fish for years to come! These silver fellows don’t just rely on us for help though. They have an incredibly effective camouflage that uses embedded crystals within their bodies to create a glistening effect, keeping them concealed in the surrounding water. However some predators have worked out a very clever way of overcoming this feature, as you can see in this video below.

Three against one seems hardly fair, but then again that’s the circle of life. In a few weeks time, the adult herring will have reached their shallower waters and will begin to breed. In just two weeks the eggs produced, that have been sheltering near rocks or on seaweed, will flood the coastlines in numbers over 800 billion! Not only will this ensure that the next generation will be stronger than ever before, but also that resident predators will get the much-needed meal and by the time this arrives there’s quite a queue for breakfast, lunch, and dinner. You’ll probably find sea lions, seabirds, dolphins, sharks, porpoises, seals, whales, tuna, halibut and cod to name a few on an almost endless list.