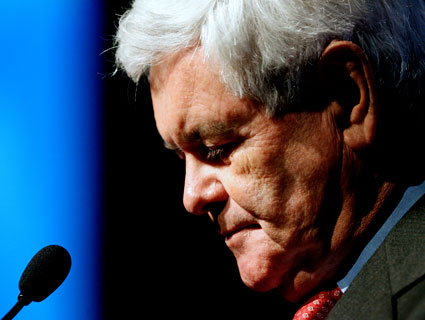 When Sen. John McCain (R-Ariz.) accepted the endorsement of Texas megachurch pastor John Hagee in 2008, the result was a PR disaster. After critics pointed to Hagee’s incendiary views on gays (whom he held responsible for Hurricane Katrina) and Catholicism (which he described as a “false cult“), the Arizona Republican called Hagee’s views “crazy and unacceptable” and renounced the endorsement.

But three years later, Hagee is once more involved in Republican presidential politics. Later this month, he’ll host former House Speaker Newt Gingrich, a 2012 aspirant, at Cornerstone Church in San Antonio. For the candidate and the pastor, the summit is a chance for two controversial figures to help each other back into the spotlight—though a Hagee spokesman says the pastor has no plans to endorse Gingrich.

“Every so often [Hagee] pops up like a Whac-A-Mole and then goes away again,” says Chris Korzen, executive director of Catholics United, who was part of the anti-Hagee choir three years ago. “Why does someone like Newt Gingrich feel like he has to have a public association with this person? Clearly it’s about politics.”

After the 2008 endorsement controversy died down, a longtime Karl Rove ally, Deal Hudson, helped to make peace between Hagee and his loudest conservative critic, Catholic League President Bill Donohue. Hudson, who chaired George W. Bush’s Catholic outreach efforts in 2000 and 2004 before taking a similar role with McCain, reached out to both Hagee and Donohue. A former Southern Baptist, Hudson met with Hagee and gave him a collection of books about Catholicism. A few months later, and after a brief correspondence with Donohue, Hagee and his wife showed up at the Catholic League’s offices for a meeting to clear the air.

Donohue, who called Hagee “an inveterate bigot” three years ago, now says there’s no longer any bad blood between the two camps. “As far as I’m concerned, Hagee and I are on friendly terms today,” he remarks. “We had a very straight man-to-man talk on things. I’m convinced that he turned the corner.”

Donohue says Hagee apologized, and that the pastor and his followers have toned down their rhetoric—at least in regards to Catholicism—over the last two-and-a-half years. Hagee, for his part, has maintained that the whole flap was based mostly on a misunderstanding, stating that he had called historic anti-Semitism—and not the Catholic Church—a “false cult.”

“There may still be some people who believe some of the lies that were told about me during the campaign,” Hagee explained in a 2009 interview. “But I’ve come to believe that those who readily accepted these smears were probably not my friends to begin with.”

The pastor’s history of incendiary comments meshes with his unique brand of Christian Zionism. He’s warned, for instance, that the anti-Christ would be, gay, part Jewish, and president of the European Union. In his book, Jerusalem Countdown, he writes, “[M]ost readers will be shocked by the clear record of history linking Adolf Hitler and the Roman Catholic Church in a conspiracy to exterminate the Jews.” (He has since apologized, acknowledging that there were “thousands of righteous Catholics…who risked their lives to save Jews from the Holocaust.”)

Hagee and his supporters—like Sen. Joe Lieberman (I-Conn.) and Abraham Foxman of the Anti-Defamation League—contend that his most inflammatory remarks have been taken out of context. He’s stated that his remarks on Katrina weren’t meant to imply cause and effect. (He said the hurricane was “the judgment of God against the city of New Orleans,” which “had a level of sin that was offensive to God.” He then pointed out that “there was to be a homosexual parade there on the Monday that the Katrina came.”) Hagee has also emphasized that his hawkish foreign policy and end-times theology are mutually exclusive, because “humans are utterly powerless to change God’s timetable.”

For Gingrich, who converted to Catholicism in 2009, the upcoming meeting with Hagee is an opportunity to court evangelicals while playing up his neoconservative credentials. Hagee is the founder of Christians United for Israel, a hawkish organization that has pushed for the US to consider military strikes against Iran.*

But the Gingrich-Hagee tête-à-tête also underscores the problems the twice-divorced candidate faces with the GOP’s social conservative base. Hagee’s a polarizing figure even on the right, and given his past, he’s not the kind of person you reach out to unless you really need to. (Gingrich’s spokesman did not return calls for comment.)

“He’s controversial as an evangelical,” says Mark Silk, a professor at Trinity College in Hartford, Connecticut, who writes frequently about Catholic politics. “Theologically, [Hagee is] a dubious character; he’s regarded as not one of the gang. It’s hard for me to see that it gets [Gingrich] any street cred from anybody.”

John C. Green, a senior research adviser at the Pew Forum on Religion and Public Life, agrees. “My sense is that Rev. Hagee’s public influence in Republican presidential politics has been substantially diminished because of the events of the 2008 campaign,” he explains in an email. “Few GOP candidates will want to be publicly associated with him.”

Gingrich’s summit with the controversial religious leader comes as he struggles for support among members of his own faith. According to a recent survey by the evangelical Barna Research Group, just 27 percent of Catholics have a favorable opinion of Gingrich, while 46 percent have unfavorable views. The numbers for former Massachusetts governor Mitt Romney, a Mormon, and former Arkansas governor Mike Huckabee, a onetime Baptist preacher, by contrast, were nearly reversed.

Donohue, for one, has his doubts about Gingrich’s bona fides. “Newt’s got some baggage, both in terms of the professional—the ethics questions—and the personal. There is the lingering suspicion: Anybody can fall once, but when it becomes somebody like Plaxico Burress or Roger Clemens, it starts to get old,” he says, alluding to Gingrich’s history of infidelity, and two professional athletes whose serial misdeeds landed them in legal trouble.

Three years ago, McCain’s embrace of Hagee boomeranged because everyone wanted to talk about it. What was meant to be a dog whistle—a signal meant to be heard only by social conservatives—mushroomed into a full-fledged controversy. But for Gingrich, the lack of much reaction (so far) to his rendezvous with Hagee might be a troubling sign. As Silk puts it, “It’s too early in the cycle for anyone to get excited about anybody who’s such an also-ran getting involved with anybody who’s also old news.”

*Correction: This section has been updated to clarify that CUFI has called for the consideration of strikes, rather than immediate action.