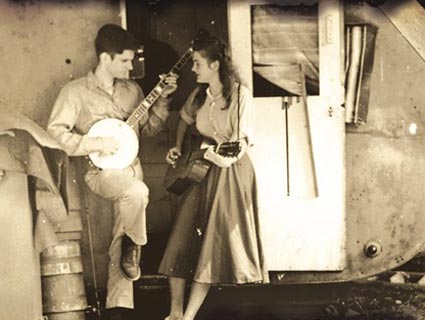 Out this week, Fly Down Little Bird is a fun collection of tunes the Seeger siblings grew up on. They were one hell of a musical family. Daddy Charles Seeger was a New Deal folklorist and musicologist. Their mom, Ruth Crawford Seeger (Charlie’s second wife), was a composer and pianist who served as transcriber of John and Alan Lomax’s field recordings of old-time American music—which meant that these kids had unbelievable firsthand exposure to their nation’s cultural currency. Both started playing young and mastered many an instrument. They lived in suburban Maryland, where the likes of Leadbelly and Woody Guthrie might drop in for a visit from time to time. Not to mention their older half-brother, the one and only Pete Seeger, still kicking at 91. Okay, yeah, I’m jealous.

Peggy, a veteran folkie with a voice like honey slightly crystallized, is now 75. Mike, who passed on in 2009, was a multiple-grammy-winning player of the banjo—and, well, you name it—who was best known for the influential New Lost City Ramblers, a band he cofounded in the 1950s. Lucky thing that he and Peggy had already recorded these songs as part of an on-and-off lifetime collaboration starting when the young pair teamed up to play local square dances. (Check out “Red River Jig” for a taste.)

Lovers of old-time music will totally enjoy these songs. You might even recognize a few from your kids’ CDs, although they weren’t written for children. A lot of popular music from early in the last century bore an earnestness or an implicit corniness that draws kids like moths to a flame. “The Dodger Song,” a ditty about deceitful politicians, lawyers, doctors, and just about everybody else, is delivered in a lighthearted kid-friendly way. “Fod!” is chock full of goofy nonsense (fod?) that would crack up any six-year-old—and made me laugh, too. And I’ve personally entertained preschoolers with the silly “Janie Jenkins.”

There’s also some period stuff here you’ll may need to explain to the children, like “Big Bee Suck the Pumpkin Stem,” where Mike Seeger sings: Big bee suck the pumpkin stem, little bee make the honey / Black man hoe the cotton patch and the white man tote the money. And on “Where Have You Been, My Good Old Man,” a wife’s upbeat interrogation of her hubby, Mike Seeger plays the geezer with a voice so gruff that you feel a little sorry for his wife.

“Old Bangum” would be familiar to any kid raised on Dan Zanes, or for that matter Pete Seeger or Doc Watson. It’s the darker, grittier precursor to “Froggy Went A’ Courting”—Old Bangum dead went out and ride, sword and pistol by his side—and it’s pleasantly weird, at that. In this version, the fair maid refuses Old Bangum’s marriage proposal until he goes off and slays a bone-grinding, blood-sucking bear in yonder woods.

All told, these 14 songs will bring listeners back to what some folks like to think of as simpler (read: better) times. But for the most part, that’s just another fairy tale. Probably best to skip the nostalgia and enjoy the music.