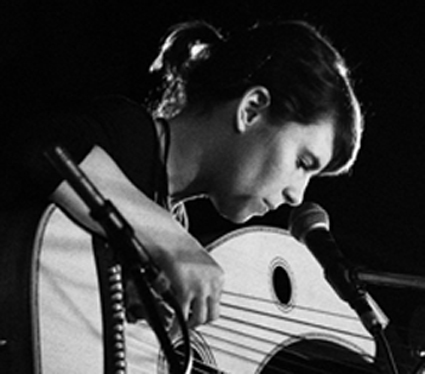 Showing off the harp guitarPhoto courtesy of Kristen Evans

Kaki King has been playing music for so long, she can’t even say when she started: “I don’t remember a time that I didn’t know how to play the guitar,” she says. The Atlanta-born 31-year-old was up on stage at an early age, playing music in primary school, drumming her way through adolescence, scoring gigs before she got her drivers license, and producing her first album at 23.

But where music comes naturally, all the publicity can be odd, King says. “I’m constantly in this world of I’d Rather Not: I’d rather not answer the same question over and over so my whole life and emotions can be put in a little paragraph that you can edit. I get why people want to come see me play guitar, but I still don’t understand why people want to interview me.”

Not to say she can’t handle a journalist. She repeatedly pokes at Rolling Stone‘s effort to describe her music as “Bootsy Collins meets Van Halen”—the description from when she became the first woman included in the magazine’s “The New Guitar Gods” list. She also talks back if she thinks a question is bunk. When I tossed her the customary wrap-up, asking whether she thinks there’s anything I missed, she got all laughingly sassy on me. “Oh No! You have to do your own job! I’m not doing your job for you! What kind of question is that? You have to come up with your own questions!” she teased. “What do you want to ask that your editor never lets you ask?”

Her good nature makes for hilarious interviews and a fantastic stage presence, as evidenced one recent evening at the Ashkenaz in Berkeley, California. The younger part of the audience sat like pretzels—tight and tangled around the edge of the small stage. The older crowd sat on chairs scattered around small round tables. She had some fun with the geezers: “You guys with the beards and the gray hair, I know you guys are the guitar police.”

This seasoned fan-base, she told me later, is the reason she spends so much time describing her extensive guitar collection. Onstage, she sits with one instrument in her lap, an arc of six others around her, switching up on nearly every song. She talks about each one before playing it, like a mother touting her children’s virtues. “If I were a guitar player and saw a freaky guitar, I’d want to know about it,” she told me.

She bought most of her axes shortly before this tour. And she didn’t have her banjo—which she calls a “dojo” because of its dobro-like resonator, until just a week before departing. This “experiment” she says, forces her to get acquainted with the new instruments as she travels. They include a deep and bassy-sounding seven-nylon-string guitar with a fanned fret and a bridge set at a sharp angle. “This guitar is a total mindfuck,” she told the audience. Then there’s a “chorusy” 12-string tuned an octave higher than normal and sporting a specially angled bridge.

She also brought along a Weissenborn slide, which features a hollow neck and produces a full-bodied surf-rock buzz—and her standby Ovation. When she plays yet another of her babies, she slips a sort of carving tool under the 17th fret, bending the strings to make a “weird bibey sound.” This way, she told an audience in Hollywood, “you can make a Koto for fifty cents.”

Her most visually impressive instrument is a huge harp guitar, which she concedes is “certainly challenging: I’m kind of hiding behind it and sticking my head up over it.” This one, she jokes, was “made popular by dolphins that wanted a guitar that looked more like them.”
But getting used to seven new guitars on tour is not as difficult as you might think, she told me: “I’m not playing the flute. In the end, they’re  guitars.”

The guitar police didn’t need to be persuaded that King has paid her dues. With crackerjack speed, she scampers between techniques: drumming on the guitar body, the strings, the bridge; nimble plucking; string tapping; and an occasional spritz of harmonics. At the Ashkenaz, she played a few originals, like “I Need a Girl With a Map,” and some ambitious covers, such as  Andrew York‘s “Andecy.” The nuances she creates with her fingers varies as widely as the musical elements she employs. “Doing the Wrong Thing” started just as you might expect from such a title, breezy and ethereal, before sliding into a contemplative riff, a frantic rant, and back to a sober hustle.

Before playing the only vocal number of the night, “Sunnyside,” she encouraged fans to visit the merch table…to buy underwear. The underwear, she baited, “has the logo from the last record, Junior, which is the walkie-talkie. So you have the walkie-talkie on the front, and the walkie-talkie on the back. So they can—tchlck,” she clucked, “communicate with each other.” A man hollered: “Which side do you talk into?” She raised her eyebrows and smiled. “That is…you know…a personal choice, my friend. For me, you know, it depends on the day.”

Besides her stringed collection and underwear-for-sale, she’s lugging around “every book, Rosetta Stone, and flashcard imaginable” to learn Italian, a handy tool for talking with her Italian fans, but also just a personal hobby. When she’s not globe-trotting, she’s tending to her garden back in New York City. “I think I’m constantly trying to re-create the jungle I grew up near.” She admits that she misses the South: “The rest of the world…they just don’t know…,” she trails off, when I mention sweet tea.

You can check out several songs from the show I saw, thanks to this concertgoer. But here’s another sample of her work on the harp guitar: