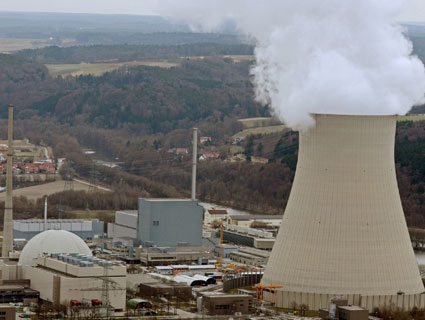 The day before the earthquake and tsunami that sparked Japan’s escalating nuclear crisis, the Nuclear Regulatory Commission approved a 20-year license extension for Entergy’s Vermont Yankee Nuclear Power Plant in Vernon, Vermont. The plant uses the same GE Mark 1 reactor design as Japan’s Fukushima Daiichi plant, which has revived questions about the safety of America’s existing nuclear infrastructure—and the efficacy of the nation’s top nuclear regulator.

The NRC approved Entergy’s license despite the fact that Vermont’s legislature voted by an overwhelming majority last February to reject an extension for the 39-year-old plant. Among a number of safety concerns, the plant had been found to be leaking radioactive materials via a network of underground pipes—pipes that an Entergy executive had initially testified under oath didn’t exist.

Vermont State Representative Tony Klein (D), chair of House Natural Resources and Energy Committee, recalls that when he asked NRC representatives about the pipes at a hearing two years ago, the officials were unaware of them—let alone the fact that they were leaking. “How the hell can you regulate something when you don’t know it even exists?” Klein asks. “I don’t have much faith in them at all, and I don’t think the rest of the country should either.”

The future of the Vermont plant is still in question; Entergy is pushing for a new vote in the state legislature that would reverse last year’s decision. It is seeking, says Entergy spokesman Alex Schott, “constructive resolution of our issues with the State of Vermont.” He adds that the NRC decision “confirms that Vermont Yankee is a safe and reliable nuclear plant.” If the company doesn’t succeed in changing the state’s decision, there’s a strong chance this matter will end up in court, with Entergy arguing that NRC’s approval should preempt Vermont’s decision.

Nuclear watchdogs point to the Vermont situation as evidence that the NRC is providing lackluster oversight, and isn’t even evaluating the safety of such plants before issuing new licenses. “Every single reactor that has asked for a license has been given one from the NRC,” says Jim Riccio, a nuclear policy analyst for Greenpeace USA. “It’s not a standard, it’s a rubber stamp.”

There are 104 nuclear reactors currently operating in the US, all of which were granted initial licenses for 40 years. The NRC has approved renewals for 63 of those plants, and is currently considering extensions for 12 more. Every plant has gotten the green light, nuclear watchdogs say, because of NRC rule changes in the early 1990s that limited the factors regulators evaluate when considering a relicensing application. The current process, they say, fails to take into consideration a number of concerns about whether the infrastructure is still secure and whether the plants are sufficiently updated for modern threats.

It’s not just nuclear critics who find the NRC’s review process lacking. The commission’s inspector general has expressed similar concerns, concluding in a September 2007 report that the NRC’s staff “does not consistently provide adequate descriptions of audit methodology or support for conclusions in license renewal reports.” The NRC did not respond to requests for comment.

Paul Gunter, of the advocacy group Beyond Nuclear, points to another Mark 1 reactor in New Jersey, Oyster Creek Nuclear Generating Station, that was relicensed by the NRC despite evidence of corrosion in the plant’s steel containment structure. Just a few days after the commission approved its license, the plant’s owner divulged that, like Vermont’s plant, it was leaking radioactive material from an underground pipe.

The nuclear industry says it’s too soon to tell how much Japan’s crisis could impact nuclear relicensing in the US. At the very least, says Carl Baab, a spokesman for the Nuclear Energy Institute, the industry’s lead lobbying group, it will subject plants that are currently in the process to additional federal scrutiny.

In Vermont, Japan’s nuclear disaster has reaffirmed existing worries about nuclear safety. Vermont Gov. Peter Shumlin (D), an outspoken opponent of the Yankee plant, says he hopes the situation in Japan will prompt a closer examination of the nation’s nuclear infrastructure—and perhaps encourage other states to block the relicensing of plants. “We have 104 aging nuclear power plants in America,” Shumlin tells Mother Jones. “I hope that events in Japan might lead us to reexamine our irrational exuberance that we can run them 20 years past their design life.”