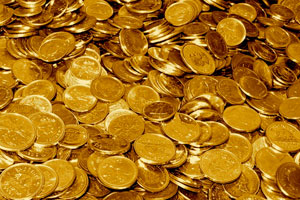 After three decades of railing against America’s monetary policies, Congress’ most famous gold bug and anti-Fed crusader, Rep. Ron Paul (R-Texas), doesn’t have much to show for his efforts on the national level.

But Paul’s message finally seems to be gaining traction outside Washington. Since the beginning of 2009, lawmakers in more than a dozen states, with the backing of conservative organizations like the Tenth Amendment Center and the American Principles Project, have introduced bills promoting the use of gold and silver currency for everything from buying groceries to paying taxes. Last week, Utah became the first state to enact such legislation, declaring gold and silver coins from the US mint legal tender, and creating a commission to study the efficacy of this move.

Other proposals, in Georgia and Iowa, would mandate that all state taxes be paid in gold and silver. In Montana, a “sound money” bill that would have required all taxes on cigarettes and tobacco products be paid in precious metals was narrowly defeated on Monday.

Some supporters hope the movement will succeed where Paul’s efforts have fallen short—by bringing down the Federal Reserve system from the bottom up.

“It’s much more difficult to be lobbying against one bill than it is against 50 bills,” says Bill Greene, a conservative activist and political consultant whose sample legislation has served as a foundation for a bill that’s currently before the Georgia legislature. “As soon as one state passes a sound money bill, that state is going to reap the most benefits first. That’ll open the floodgates and get the ball rolling and more and more states wanting to do it.”

Supporters of a hard-money bills argue that they’re simply putting their governments back in compliance with the law of the land. They cite a section of the Constitution stipulating that nothing but gold and silver would be considered “a tender in Payment of Debts.” (The gold standard was officially abandoned in 1971.)

“I kind of remember one day I was sitting in my chair, I’d been reading something about [monetary policy], and I pulled out my iPhone, pulled up the copy of the Constitution I keep on there, and pulled up Article 1, Section 10,” says Larry Hilton, a Utah insurance lawyer who drafted his state’s law and set up an organization, Utah Sound Money, to promote it. “And I thought, ‘That’s very interesting!'”

Bills like the one passed in Utah pose a direct challenge to the authority of the Federal Reserve, whose mission is “maintaining the stability of the financial system.” To that end, the Fed controls the flow of specie, pumping more dollars into circulation as the economic climate dictates. States do not have the power to make their own currency—although a few of the bills argue that, in the event of a catastrophe, that authority would fall to the states as a “police power” to ensure security. For the most part, the new gold legislation authorizes the use of specific federally minted coins (pre-1985 Golden Eagles, for instance) whose prices are currently fixed.

None of the bills would replace paper money with gold and silver outright. After all, you’d still need the dollar to pay your federal taxes. But by introducing competing currencies, or at least taking steps in that direction, proponents believe that citizens and businesses will flock to the state to take advantage of the purportedly more secure hard money. In one fell swoop, the state would create a bulwark against inflation and establish itself as sound money mecca—”preparedness and prosperity,” as Hilton puts it.

And not a moment too soon. Paul’s disciples at the state level believe that unless swift action is taken, the value of the dollar will collapse, and the nation’s economy will spiral into hyperinflation. Supporters point to Weimar Germany and Zimbabwe—which, until 2009, printed 100 trillion dollar notes—as examples of what a future United States might look like.

“It’s kind of like if you think back to the Katrina catastrophe, and you read about all the proposals that were made to strengthen and secure the levies that were just never done,” says Hilton. “I look at this as a major financial tsunami that’s about to hit the United States. The implosion of a financial system is much more devastating to human well being than even a severe natural disaster.”

“It could be as early as five months, it could be as late as five years,” says North Carolina Republican state Rep. Glen Bradley, whose own legislation to make gold and silver legal tender has stalled in the state legislature. Bradley, a veteran of Paul’s 2008 presidential campaign, is not convinced America’s future inflationary spiral will hit Weimar levels, but he’s not dismissing it out of hand, either.

The practical details haven’t been fleshed out, but proponents of the measures suggest that the government establish depositories across the state to securely house the metals, and then enable private banks to set up corresponding electronic currencies. Rather than dropping by Gringotts Wizarding Bank anytime you needed to buy a gallon of milk, you could just use your Bank of America gold debit card.

E-currency or no e-currency, though, the anti-Fed camp is likely to face serious opposition. For one thing, the value of an ounce gold hasn’t exactly been stationary for the last three decades; even with the recent spurt of goldbuggery, the metal still hasn’t fully rebounded to the levels it reached in the early ’80s. For another thing, gold isn’t exactly immune from economic crises, either. The Great Depression began when the United States was still under the gold standard, and there’s compelling evidence to suggest that it lasted longer and did more damage precisely because of the inflexibility of the monetary system.

Even the basic contention among Paul supporters that gold and silver hold a unique spot in global monetary history, is subject to debate.

“Why should we stop with the gold standard?” asks University of California–Berkeley economist Barry Eichengreen, who’s written a book about the role of the gold standard in the Great Depression. “If you go back in American history, once upon a time in North Carolina tobacco was legal tender, and you could pay your taxes with the tobacco crop. Or we could go back further and make wampum legal tender. All of these ideas make equal amounts of sense in my view.”

North Carolina State University economist Michael Walden, meanwhile, takes issue with the strategy of the bill’s backers. States that act unilaterally will be at a “competitive disadvantage,” he says, because any business that comes to the state will be forced to deal with gold. “These issues are certainly worthy of debate, but the place to debate them is on the federal level.”

There are also legal questions involved. Last week, a federal grand jury in North Carolina convicted a Honolulu man, Bernard von Nothaus, of committing “conspiracy against the United States” by minting gold liberty dollars with Ron Paul’s image on them. Greene fears that his challenge to the government’s monetary policy could likewise end up in court.

In other words, Ron Paul’s revenge might just have to wait a little while longer.