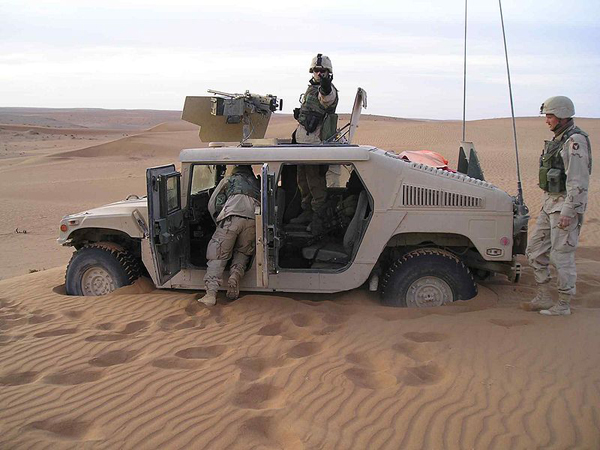 [UPDATE: Today, the Washington Post‘s Dana Milbank follows up on this story and updates my numbers: Turns out Rep. Bill Young hasn’t gotten $26,350 in contributions from the builders of the Humvee. He’s gotten $80,000.]

You probably don’t know C.W. Bill Young (R-Fla.), the chairman of the House Appropriations defense subcommittee. But the folks who make Humvees sure do: Since 2003, AM General has given Young at least $26,350 through its political action committee and 11 of its top executives. Their CFO and his wife have poured more than 10 grand into Young’s reelection coffers. Last year, the automaker’s PAC also gave $5,000 to Young’s GOP colleague on the panel, Rodney Frelinghuysen of New Jersey.

It makes sense that the Army is ready to do away with Humvees: They’re about as safe, efficient, and useful in the war zone as a civilian Hummer is on the streets of Lower Manhattan. IEDs do nasty things to Humvees, and so they’ve been passed by for other, heavier vehicles in the field. And since the majority of service members in Iraq and Afghanistan are vulnerable to rocket and mortar attacks on their bases, the military would like to take its Humvee money and beef up base defenses.

Perfectly understandable! So why the holdup? Ask Rep. Young. He “said the panel is worried about the cost that would be incurred should the Army decide to restart the Humvee program down the road,” Defense News reported. So, a GOP congressman won’t kill an obsolete defense program to free up money for immediate lifesaving gear, because there’s a chance that obsolete program might make a comeback. (Maybe we should start stockpiling slings and arrows, too. You know, just in case.) That’s one explanation. Another is that Young and other Republicans on the subcommittee want to do right by the Humvee’s manufacturer, AM General. Either way, Defense Secretary Bob Gates is not pleased:

Gates said the House Appropriations defense subcommittee is the lone holdout among the four defense oversight committees that must approve reprogramming.

The Pentagon wants to get this equipment on contract immediately so the systems can be delivered to Afghanistan before fighting intensifies in the spring.

“We should not put American lives at risk to protect specific programs or contractors,” Gates said.

We should always be skeptical when the US military establishment inserts itself into the US political process. But in this case, a little military assertiveness isn’t necessarily a bad thing. Republicans enjoy a reputation for hawkishness, and as a result they often have fewer qualms about messing with military budgets than Democrats, who fear appearing “weak on defense.” Last year, for instance, Sen. Richard Shelby (R-Ala.) held White House nominations hostage to steer an Air Force tanker contract to a foreign plane maker with a plant in his district. Last month, the Air Force struck back. And it appears that the DOD will again assert itself against Young’s GOP-led panel. Whether that will be any consolation to the troops in Iraq and Afghanistan remains to be seen.