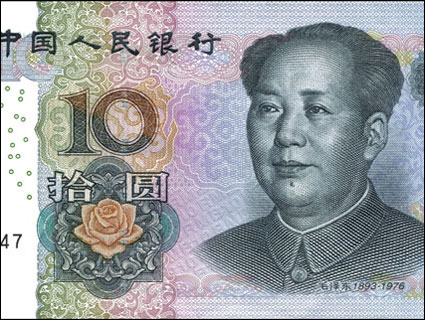 Campbell Fittings, a maker of precision screws and couplings used by petrochemical, mining, and construction companies, is nothing if not efficient. A typical employee in its factory in Boyertown, Pennsylvania, supervises two machines that each stamp out a new screw every 12 seconds. Yet its Chinese competitors sell nearly identical screws in the US for at least 40 percent less—well below what Campbell pays for raw materials. It’s no secret why: For years, the Chinese government has kept the yuan trading at 40 percent below its true market value, making its exports that much cheaper. “I can fight companies,” says Joe McGlynn, Campbell Fittings’ vice president. “I can’t fight countries.”

The company’s 75 workers aren’t the only ones getting (ahem) screwed over by what is effectively a huge subsidy for China’s manufacturing sector. “Chinese currency manipulation is the single biggest reason why so many Americans are still jobless,” says Peter Morici, a University of Maryland business professor and former chief economist with the US International Trade Commission. Eliminating the practice, economists estimate, would boost American exports by $125 billion a year and create 900,000 US jobs. “The Chinese have figured out that this advantages them even though it’s unfair,” Morici says. “And they are not going to change it until we take action.”

But attempts to address the problem have hit a Great Wall here at home. Senior House Republicans are putting the brakes on the Currency Reform for Fair Trade Act of 2011, a bill that would make China’s currency practices punishable under US law. They oppose it, says an inside source familiar with the negotiations, because “US multinationals with operations in China really don’t like it.” These mega-companies fear that China will retaliate by crimping access to its markets—not to mention that their manufacturing operations in China will make less money selling goods back to American consumers without the subsidy.

“I think it is fair to say that Wall Street firms seeking financial business in China, and multinationals like Caterpillar with big manufacturing activities in China, have lobbied both Republican and Democratic administrations against action,” Morici says. “Goldman Sachs’ and Caterpillar’s interests are more aligned with China than with the US economy.”

Nowhere is China’s political stranglehold more evident than within the ranks of the 11,000-member National Association of Manufacturers, America’s most powerful trade group for factory owners. On the surface, NAM acts as though currency manipulation is one of its top concerns. Its website claims that NAM has “long pressed for China to allow the yuan to appreciate.” The high value of the dollar relative to currencies such as the yuan “simply prices US exports out of the market,” reads a 2010 NAM white paper. “NAM members, especially smaller manufacturers, have made it clear that the number-one factor affecting their exports is the value of the dollar.”

Yet well-placed members say the trade group has been unwilling to take action. It refuses, for example, to endorse the above-mentioned bill, a version of which passed the House last year with strong bipartisan support, but was derailed by Senate Republicans. NAM’s professed concern about currency manipulation “is just lip service,” says McGlynn, an active member. “They are doing it for appeasement.” (NAM did not return repeated calls for this story.)

Supporters of the currency bill, sponsored by Rep. Sander Levin (D-Mich.), say it’s far from draconian. It simply affirms the ability of the Department of Commerce to consider unfair currency manipulation as a factor in trade complaints—a power it already has but has so far declined to use. Far from being a shock to the global economy, the bill would let regulators gradually ratchet up duties against unfairly subsidized Chinese goods. If NAM threw its full weight behind the bill, says my inside source, “It would pass in a heartbeat.”

Not too many years ago, before it became standard practice for American businesses to outsource manufacturing to China, NAM very nearly went to bat on the currency issue. In 2003, its staff assembled several dozen NAM members into a group known as the Coalition for a Sound Dollar (later renamed the Fair Currency Alliance) and drew up a currency-manipulation complaint that it planned to file, in conjunction with the AFL-CIO, at the Office of the US Trade Representative. The effort had the backing of NAM’s then-president Jerry Jasinowski, but in 2004, before the complaint was finalized, Jasinowski was replaced by John Engler, the former Republican governor of Michigan. The trade group backpedaled on its support, so the currency alliance split with NAM and filed the complaint on its own. The Bush administration immediately rejected it, arguing that it “would hamper, rather than advance, Administration efforts to address Chinese currency valuation policies.” (Translation: It didn’t want to piss off China.)

In the ensuing months, the schism within NAM widened. A group of about 50 small and mid-size NAM members known as the Domestic Manufacturing Group began lobbying Congress to pass the Chinese Currency Act of 2005, an anti-manipulation bill then under consideration. When Engler learned of the DMG’s lobbying, he told the group it could not use NAM’s offices or claim any public affiliation with the trade association.

The DMG members kept agitating. Many joined NAM’s International Economic Policy Committee, which in 2006 voted to recommend that the trade group support the Chinese Currency Act. But their victory was short lived. A few months later, in a move that has never been widely reported, NAM’s executive committee, a body stacked with board members representing multinational corporations, took the unusual step of overruling the recommendation.

“A lot of the people who are powerful leaders within NAM are benefiting from the currency subsidy in China,” says DMG founder Dave Frengel, director of government affairs for the Pennsylvania-based tooling company Penn United. “They manufacture there cheaper with all the subsidies and then keep our trade-enforcement laws at bay so that they can import those unfairly cheap manufactured goods back into the US market.”

McGlynn, who is also a DMG member, goes so far as to say that NAM “is being run like it’s the International Association of Manufacturers.” Indeed, 19 of the 29 members of its board’s executive committee (about 65 percent) represent companies with large overseas production capacities—at least 13 have more employees abroad than in the United States. (Pfizer, which has a seat on the committee, won’t disclose where its employees are based.) Since only sitting board members get to elect new board members, it’s little surprise that NAM’s leadership doesn’t reflect its membership—reportedly two-thirds small and mid-size domestic manufacturers.

“A lot of people have different hot-button issues, and NAM is trying to address all of them at the same time,” says Drew Greenblatt, a Baltimore-based manufacturer of steel goods who sits on the executive committee. “It’s a challenge.” Greenblatt adds that he strongly supports federal action against Chinese currency manipulation, but says NAM has focused instead on opposing health care reform, higher taxes, and card check legislation, “things where there’s broad-based support.”

Fed up with NAM’s doublespeak on the currency issue, some small manufacturers have quit the group in favor of more sympathetic organizations such as the Fair Currency Coalition; the Alliance for American Manufacturing; the Tooling, Manufacturing, and Technologies Association; and the 2,000-member US Business and Industry Council. “By me being a NAM member, I was basically preaching against myself,” says Burl Finkelstein, owner of Georgia-based Kason Industries, a 250-employee maker of kitchen supplies that left NAM in 2006 because of its currency stance. While it’s hard to say how many NAM members have dropped out for that reason, the group is clearly shrinking. In 2004, press reports pegged its membership at 13,000, which is 2,000 more than it claims today. In 2009, NAM froze salaries and eliminated 17 staff positions.

In any case, it’s a bit of a mystery why more manufacturers aren’t calling on Congress to deal with the currency disparity. “We’re all too busy trying to run our businesses,” offers McGlynn of Campbell Fittings. “And that’s why we join organizations like NAM: We hope that they represent our interests. But when you scratch away at the surface, you find that it’s not what it appears to be.”