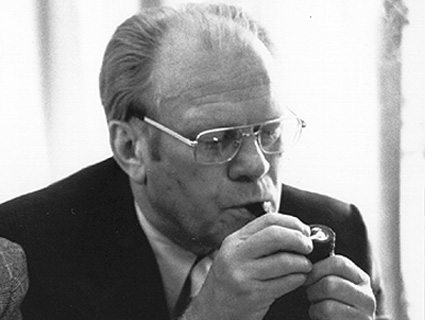 On Tuesday, First Lady Michelle Obama announced that her husband has been cigarette-free for a year. This is great news for President Obama’s life expectancy. But is it good for his legacy?

Obama was hardly the first occupant of the Oval Office to light one up every now and then. The overwhelming majority of American presidents have consumed tobacco in some form or another, and a few of them have even dabbled in other, more ilicit substances. So is there a correlation between, say, walking around with a wad of chewing tobacco in your cheeks and totally tanking as president? What about swearing off substances all together? Here’s a crude comparison of our 10 greatest presidents and our 10 worst, based on C-Span’s 2009 survey of historians. Erudite analysis and methodology below the jump: 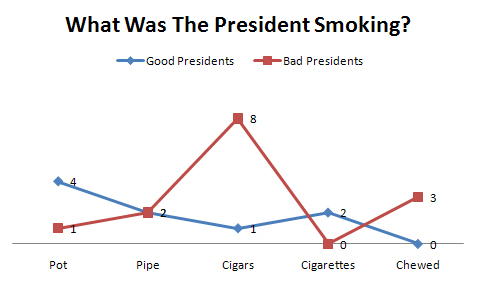 Ok, so does this chart tell us anything at all? Kind of. Chewing tobacco is, as a rule, not something that great presidents do. From a modern perspective, this one seems fairly obvious—can you imagine how Frank Luntz’s real American voters would react if Mitch Daniels whipped out a spitoon at a debate?—but there’s also a clear historical explanation: The golden age of chaw coincided with the dark ages of the executive branch. Of course Grover Cleveland chewed tobacco; he didn’t have anything else to do. The same can explain (sort of) the cigar gap: Our worst presidents literally conducted their business in smoke-filled rooms.

As for pot, I broadened the perimeters somewhat, to include Washington and Jefferson—who pot advocates insist must have tried some of their own hemp—as well as Lincoln, who they’ve also claimed as one of their own on some rather dubious evidence. (The believers quote Lincoln as writing: “Two of my favorite things are sitting on my front porch smoking a pipe of sweet hemp, and playing my Hohner harmonica.”) Kennedy’s pot connections seem a bit clearer (It was the ’60s! He was young!). The point here is that having a successful presidency makes it more likely that future generations will try to associate you with ilicit drugs.

Update: Commenter Heather Terrell notes that I should have used a bar graph, because the data are not continuous. So here’s a bar graph, for posterity: 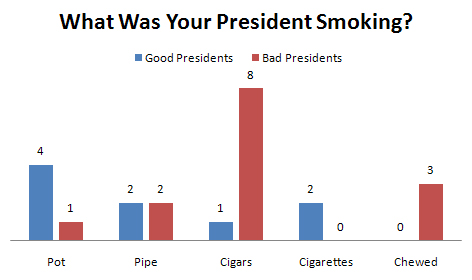