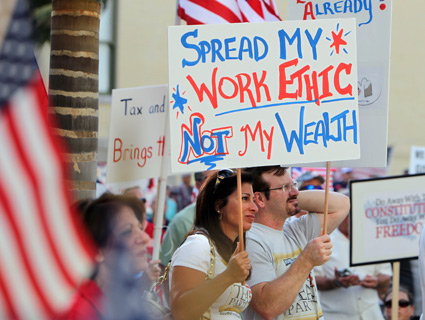 After several days of union protests in Madison, Wisconsin, opposing Republican Gov. Scott Walker’s attempt to end collective bargaining rights for many state employees, tea party activists are mobilizing their own foot soldiers to converge on Madison on Saturday, February 19. Tea partiers are arranging for buses to the state Capitol, with the help of a local talk radio host. They’re promising a massive counter-demonstration to all those angry teachers. And this effort is being spearheaded by the conservative group American Majority, which has been training activists to become candidates at the state level.

American Majority has set up an “I Stand With Scott Walker Rally” Facebook page to spread the word, and by 1 o’clock Friday, 1100 people had replied and said they were planning to descend on Madison. And if they and others do flock to the state capital, Madison could well become a media circus. Conservative provocateur Andrew Breitbart will be headlining the tea party rally, along with Gateway Pundit blogger Jim Hoft, who recently scoffed at the Egyptian pro-democracy uprising. (Hoft also blamed CBS News reporter Lara Logan’s “liberal belief system” for her sexual assault in Egypt.) Recently added: potential GOP presidential candidate Herman Cain. And there may also be a cameo appearance by Joe “The Plumber” Wurtzelbacher, who tweeted Friday morning that he was headed to Madison to “do some interviews.”

Many tea partiers across the country have complained on their websites that Walker and other conservative leaders haven’t responded forcefully enough to the unions. They were ticked off that Walker was not organizing a street-level counter-protest. And this void, they said, needed filling. Breitbart, for one, has been circulating a video purportedly showing a single tea party activist harassing fugitive Wisconsin legislators, who fled the state to prevent the GOP-dominated state legislature from voting on Walker’s bill to gut the public-sector unions. Given that the tea party has previously held sizable demonstrations in Madison, the prospects are good that it can produce a crowd this weekend—which could lead to an ugly confrontation between the union supporters and the conservative activists.

As with so many tea party events, the pro-Walker rally in Wisconsin is not just a product of grassroots citizen spontaneity. American Majority was founded and is run by Ned Ryun. He is a former speechwriter for George W. Bush and the son of former Kansas Rep. Jim Ryun (R), who was tainted by the Jack Abramoff lobbying scandal. Ned’s twin brother Drew was the deputy director of grassroots for the Republican National Committee in 2004. Drew Ryun also works for American Majority, an outfit run by established GOP operatives. The group gets most of its money from the Sam Adams Alliance, and the alliance’s funding is not publicly known. But the director of the alliance once worked with the Citizens for a Sound Economy, a group funded by the infamous right-wing Koch brothers. (The Koch brothers were major donors to Walker’s gubernatorial campaign.) Vicki McKenna, a Wisconsin talk show host who has headlined state events for the Koch-funded Americans for Prosperity, has also been helping to put on the counter-demonstration. Once again, this is an instance of tea party activism fueled by funding and logistical support from the conservative establishment.

The organizers of this anti-union protest do have the resources and know-how to stage a big rally; American Majority had a budget of nearly $2 million in 2009, according to its tax filings, and that was before the tea party movement really got going. But more important, the scheduled protest appears to be resonating with tea party activists across the country, who have been praising Walker for taking on unions. There are plenty of tea partiers who seem happy to get on the bus to Madison—and to shout down the union protesters.